Elephant-Sized Prehistoric Sloth Was A Meat Eater, Unlike Veggie Descendants 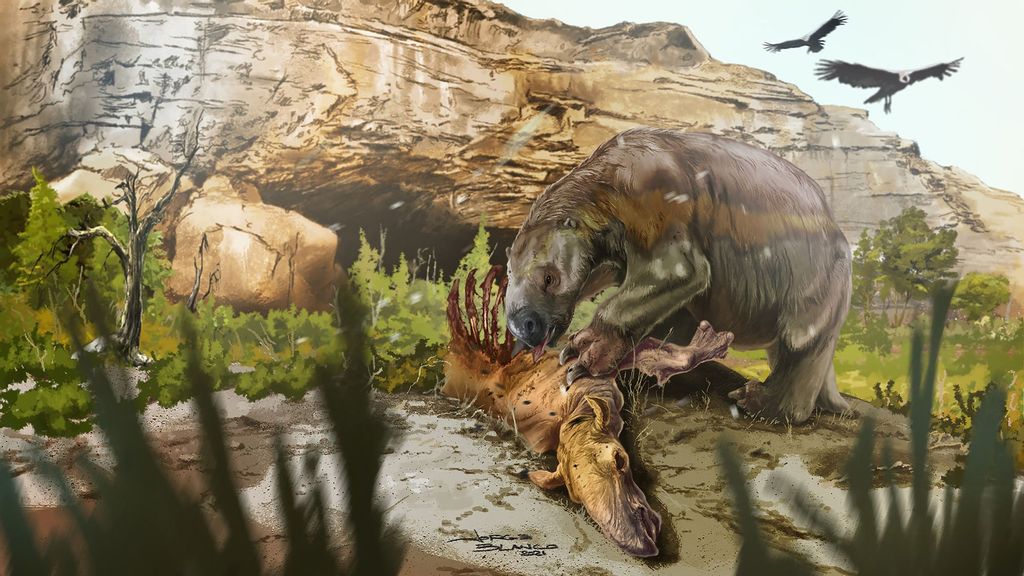 An elephant-sized sloth that roamed South America 1.8 million years ago has surprised scientists.

Unlike its tree-dwelling descendants, it was not a vegetarian, a long-held belief.

The American Museum of Natural History led a study published Oct. 7 in Scientific Reports that rejects previous assumptions. It claims the giant sloth, known as Mylodon or Darwin’s ground sloth, was an opportunistic omnivore.

The Mylodon weighed between 2,200 and 4,400 pounds and was nearly 10 feet long. The enormous ground-dwelling sloth roamed South America during the Pleistocene epoch, between 2.5 million years and 12,000 years ago.

Paleontologists have identified at least 23 different kinds and sizes of prehistoric sloths. The largest, the Megatherium, weighed seven tons.

Since the six living sloth species are all relatively small plant-eating tree-dwellers, experts had previously believed the giant sloth consumed a similar diet despite its monstrous size.

Further dental characteristics and jaw biomechanics had been cited as evidence to prove the giant sloth had no interest in eating meat.

However, in the new study, researchers used chemical analysis of amino acids preserved in sloth hair to get clues about their diets.

Julia Tejada, lead author and postdoctoral researcher at the University of Montpellier, in France, said: “Whether they were sporadic scavengers or opportunistic consumers of animal protein can’t be determined from our research, but we now have strong evidence contradicting the long-standing presumption that all sloths were obligate herbivores.”

The chemical analysis examines stable nitrogen isotopes preserved in body tissues, such as hair and fingernails.

By analyzing the amino-acid nitrogen values in a wide range of modern herbivores and omnivores to determine a clear signal for eating both plants and animals, fossils can then be measured to determine the food they consumed.

This allows paleontologists to look accurately at the diets of extinct animals and determine if they were herbivores, omnivores or carnivores.

John Flynn, a co-author of the paper, said: “Prior methods relied solely on bulk analyses of nitrogen and complex formulas that have many untested or weakly supported assumptions. Our analytical approach and results show that many previous conclusions about trophic levels are poorly supported at best, or clearly wrong and misleading at worst.”

“These results, providing the first direct evidence of omnivory in an ancient sloth species, demands a reevaluation of the entire ecological structure of ancient mammalian communities in South America,” she said. “Sloths represented a major component of these ecosystems across the past 34 million years.”