At 21, Luana Leites’ work, which breaks disability stereotypes, will be distributed in public schools. 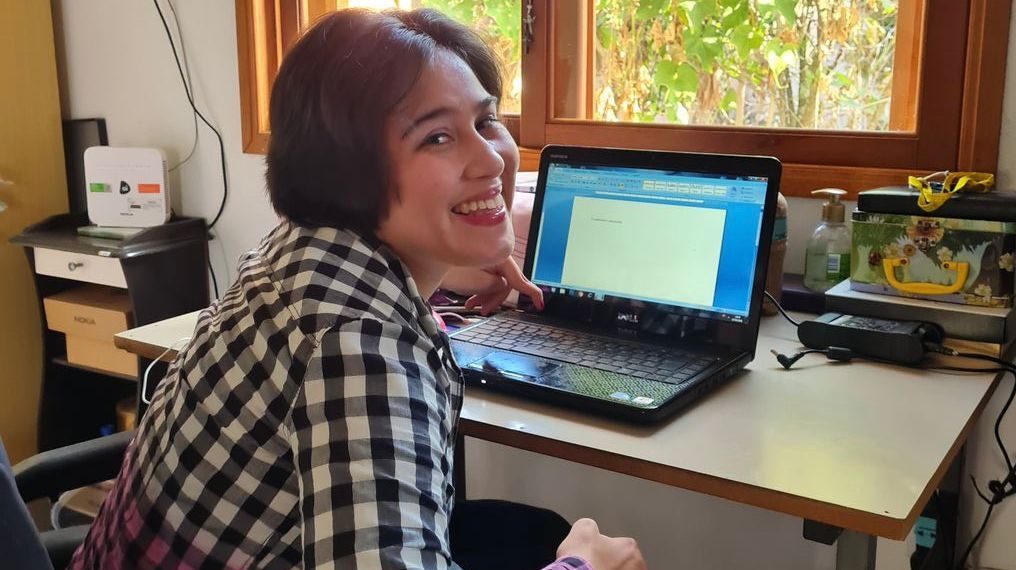 Luana Leites, 21, lives in Porto Alegre, Rio Grande do Sul’s capital. Her disability does not prevent her from doing what she likes most: studying, reading and writing poems.

“It was not meant to be a book; it was a diary that helped me vent. It all started as a game. I was in physical therapy and blurted out a few sentences that inspired me to write. I wrote everything I felt. I had always been very creative. I was already writing at 11. It was Débora, my physiotherapist, who gave me the idea of publishing a book,” said Leites, currently enrolled in her second semester at Uniritter’s College of Letters in Porto Alegre.

Débora Muccillo became Leites’ physiotherapist when she was 10. Their first session took place at the Rehabilitation Center for Patients with Brain Injury, a nonprofit organization based in Porto Alegre. Patients receive free care from a multidisciplinary team of physiotherapists, speech therapists, psychologists, occupational therapists, physicians, and nutrition and social service professionals.

Although Leites refused to start treatment in her childhood, she gradually gained confidence in herself.

“Luana had great resistance to taking physical therapy with me. It was tough at first, but then we began to bond, to develop an affinity. We met twice a week to do the exercises,” Muccillo, who lives in La Plata, Argentina, said by phone.

“We love the same type of music and artists, and that united us a lot during the physiotherapy sessions. She was discharged after five years of treatment. Luana was always curious. She liked to read, told me what she had read, and shared her poems with me. One day I asked her: ‘Why don’t you write a book with your poems?’”

Leites accepted the challenge, and the physiotherapist promised to make some drawings for the book, which she did.

She said the book would be distributed for free to public and private schools. It has more than 35 poems written during the pandemic and helps to break stereotypes involving people with disabilities.

“The project shows the relevance of poetry when reflecting on life. The book also provides the opportunity to break with the paradigms of ableism, discrimination of people with disabilities, which is still present,” said Leites.

The writer is just one of the 17.3 million people in Brazil who have some type of disability, according to a Brazilian Institute of Geography and Statistics survey. The figure represents 8.4 percent of the population over two and is part of Brazil’s 2019 National Health Survey, published at the end of August.

Leites admires musicians Dado Villa-Lobos, Caetano Veloso, Renato Russo and Cazuza and points to their work as a source of inspiration. “I dream of meeting Dado and Caetano Veloso in person one day,” she said.

Eduardo Dutra Villa-Lobos, artistically known as Dado Villa-Lobos, became known in the 1980s. Back then, he played the guitar in the Legião Urbana rock band, led by singer-songwriter Renato Russo. He died in October 1996, due to complications caused by HIV, at 36. Six years earlier, in 1990, Cazuza died of the same disease.

Through the creation of her “Diário Poético,” Leites had the support of her friend Vinicius Mello.

She met him in 2014. The classrooms were working on a joint project of Porto Alegre’s Department of Education and Department of Health. Its objective was to help students reflect on issues such as sex, suicide, bullying, alcohol and drug use among teen. Mello delivered a series of lectures in Porto Alegre’s public schools, and they met. They have been friends ever since.

Leites is notable for the way she deals with bullying and transforms the experience into poetry, according to Mello.

“Lulu is a source of inspiration for many people. One day she told me, before the pandemic … about her intention to write a book. I said, ‘Come on then, let’s think about it.’ When the pandemic began, Luana texted me she had written a lot of poems, and that’s how we started the project,” he said.

Public project Criação e Formação Diversidade das Culturas was behind Luana’s book. It has resources from the Aldir Blanc Law (No. 14.017 / 2020), which allocated emergency aid to workers of cultural industries who had interrupted their creative work during the COVID-19 pandemic.

“Whoever reads my book will find a reason to live,” said the young writer.

It is so complex, but I do not know where this poem will end …

Am I crazy or an artist?

Once again, the rhyme saves my integrity

I am decision within an indecisive society … but it is hard …

I offer love but get conflict back. What is that?

I am not a victim of anything: my partner has reached out his hand to me from heaven.

My partner is God. I am not alone; he is supporting my evolution … gratitude!