Rescuers find rider thrown off her horse on a trail in a remote area of California. 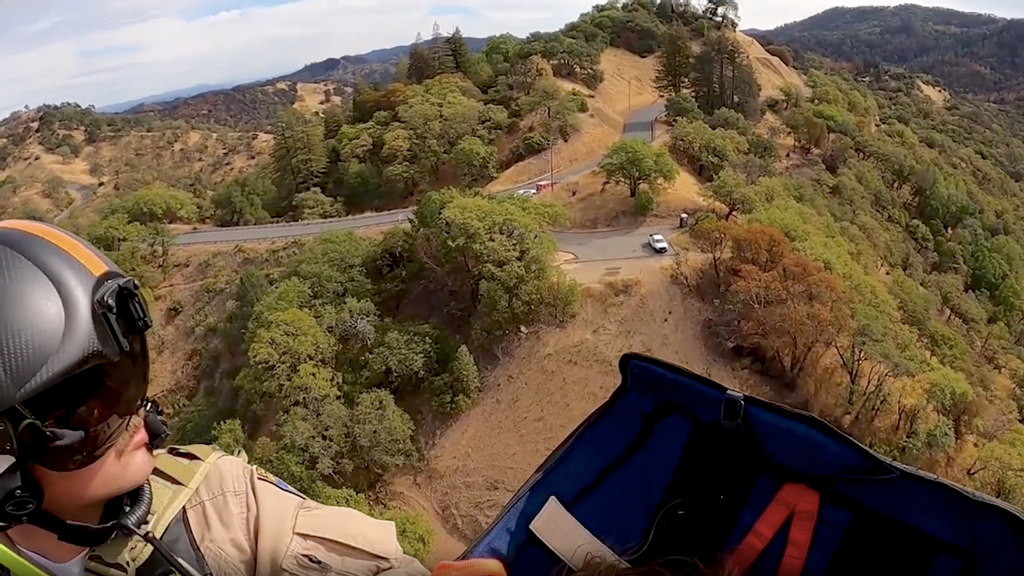 An injured horseback rider in a remote area of California was rescued by a helicopter crew alerted by the rider’s companion who found an area with cellphone reception and called 911.

Video shows the Sonoma County Sheriff’s helicopter team being lowered to the ground to assist the rider near Lake Sonoma on Oct. 6. The unnamed woman, who was thrown from her horse, was attended to by paramedics before being airlifted for medical care.

“Due to the nature of the rider’s injuries, as well as the inaccessibility of the rider’s location, H32’s tactical flight officer/paramedic was inserted into the scene, along with H1’s TFO/EMT, via H1’s long line.

“After making patient contact, the rider was packaged in a traverse rescue device and flown, via long line, to an awaiting Bell’s Ambulance.”

The Sonoma County Sheriff’s Office accompanied the video with this post: “This afternoon, the sheriff’s helicopter ‘Henry-1’ responded to the Lake Sonoma area to assist with searching for and ultimately rescuing an injured horseback rider.

“Due to the remote location, and lack of cellular phone coverage where the rider was thrown from their horse, a party riding with the injured rider had to ride to a location where they could find cellphone coverage in order to call 911.

“H1 arrived in the area and quickly located the reporting party who subsequently directed H1’s aircrew to the injured rider.”

The California Highway Patrol and the Sheriff’s Office “both have very robust helicopter rescue programs. These programs have their differences, but also have their individual strengths,” the Sonoma sheriff’s office said.

“By employing vertical reference longline, H1 is able to lift significantly more weight than a comparable sized helicopter equipped with a hoist. At times, such as today, this allows multiple rescuers to be flown into a scene to begin rapid patient care.

“Today was a prime example of how working with our allied agency partners allows us to provide patients with the most rapid and highest level of care possible; which ultimately benefits the people we serve.”

The condition of the injured woman was not reported.

The Lake Sonoma trails are popular with hikers, mountain bikers and horseback riders, according to the Army Corps of Engineers, which maintains the trails. Among the popular routes is the Lone Rock to Little Flat hike.

“The trail from Lone Rock to Little Flat is very scenic,” the Army Corps of Engineers says on its website. “You will pass through second-growth Redwood stands, small stands of Madrone, open grassland and Chaparral. The trail is 2.1 miles long and has gentle slopes. This trail does not loop, so it’s best to treat it as a point-to-point trail, leaving one car at the bottom and one at the top of the trail. … If you are planning on hiking this trail in the summer, bring plenty of drinking water.”