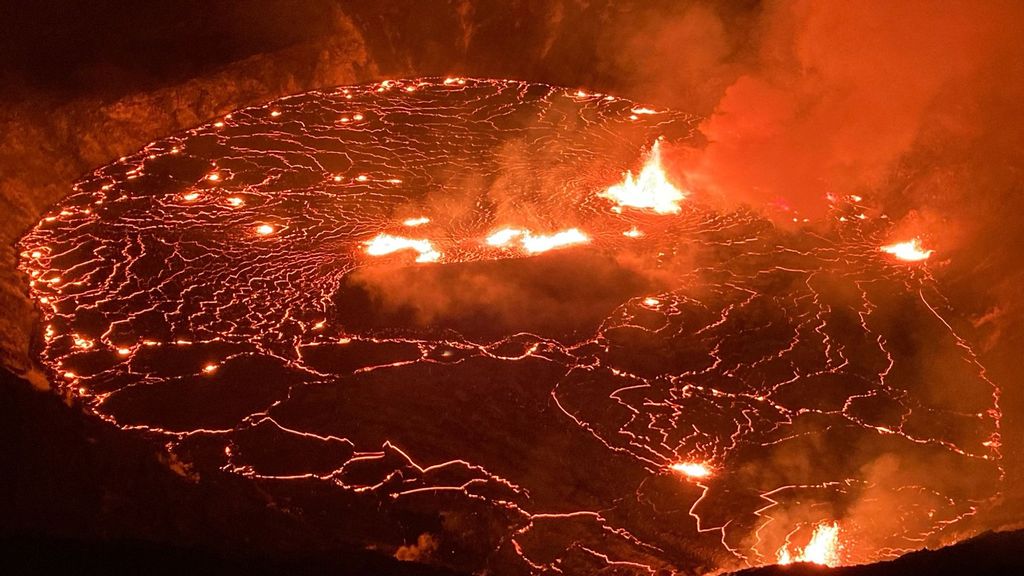 New eruptions from Hawaii's Kilauea volcano are spewing lava fountains up to 50 feet. This photo, at the beginning of the eruptions, was taken on Sept. 29. (@USGSVolcanoes/Zenger)

Lava fountains from the western fissure in the Halema‘uma‘u crater wall at Kīlauea’ss summit continue to spew forth at heights up to at least 50 feet.

The new eruption is drawing thousands of visitors to Hawaiʻi Volcanoes National Park “eager to see the plume of gas and steam by day and the lava glow after dark,” the National Park Service said.

“Sustained fountain heights from this fissure ranged from about 33–49 feet with occasional higher bursts of spatter,” the U.S. Geological Survey said.

Low lava fountains are still erupting near the southeast edge of Halema‘uma‘u lava lake on the Big Island of Hawaii, the geological survey said. “One of the small (less than 16-foot) fountains has built a cone on the edge of the island.

“Occasional spatter is visibly ejected from the vent at the top of the cone, while the main fountain is directed laterally onto the lava lake surface from within the grotto that it formed near the base of the island.”

One of the most active volcanoes in the world, Kīlauea has been sending molten rock and plumes of smoke high into the air after weeks of high seismic activity.

“Beginning at approximately 3:20 p.m. [local time] on Sept. 29, 2021, lava fountains appeared on the surface of the lava lake … Scientists on the rim used a laser rangefinder to measure fountain heights of 65–80 feet,” the geological survey said at the time.

The Hawaiian Volcano Observatory initially raised the volcano’s alert level from “advisory” to “warning” and the aviation alert from yellow to red.  But now the warning has been reduced to a “watch.”

However, the National Park Service has issued a list of safety guidelines for visitors to the park, not only because of the hot lava and gases emitted, but also due to COVID-19 restrictions.

“Hazardous volcanic gases are billowing out the crater and present a danger to everyone, especially people with heart or respiratory problems, infants, young children and pregnant women,” said the National Park Service.

The park remains open 24 hours, “and the public is reminded to stay safe by following these precautions,” the park service said.

Kīlauea is a highly active shield volcano that is believed to be between 210,000 and 280,000 years old after emerging from the sea.

Its last major eruption took place between May and September 2018 and led to the displacement of thousands of residents and the destruction of 716 homes.

The eruption in 2018 saw lava oozing from 24 vents, with one major eruption sending debris 30,000 feet into the sky.