Police looking for pair who calmly exited the scene on foot after their Range Rover ran a red light and slammed into several cars. 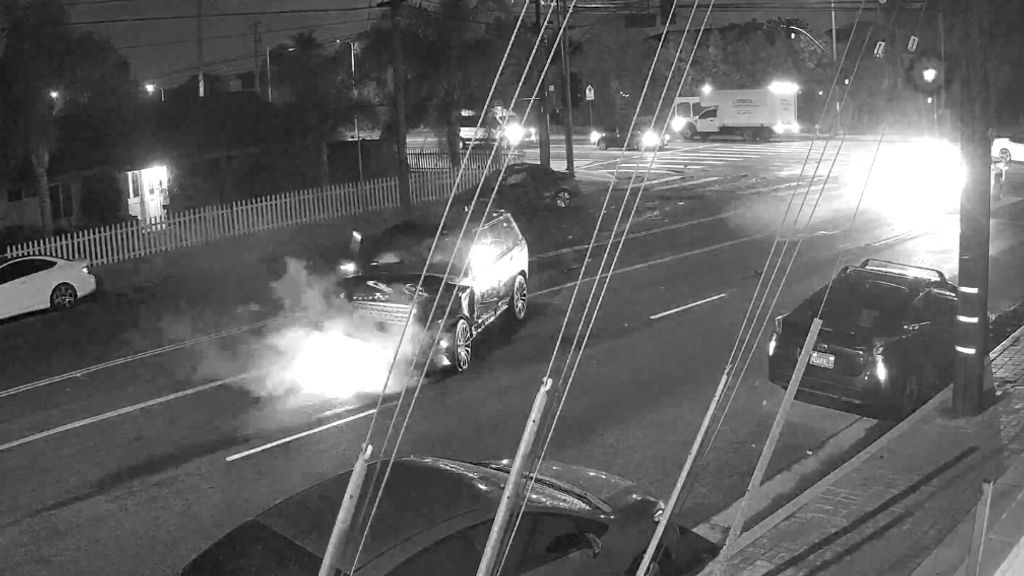 Los Angeles Police are hunting for two suspects whose vehicle ran a red light and smashed into several cars, killing a woman in one of them on Oct. 5, 2021. (LAPD/Zenger)

Los Angeles Police are hunting for two suspects whose vehicle ran a red light and smashed into several cars, killing a woman in one of them. In the aftermath of the crash, the occupants of a black Range Rover can be seen calmly exiting their smoldering vehicle — with one of them returning to it a second time to retrieve some items — before striding rapidly away from the scene.

The crash and its aftermath was caught on a traffic camera at the intersection of Hayvenhurst Avenue and Nordhoff Street on the city’s northwest side. It took place at 5:20 a.m. on Oct. 5.

The footage shows a 2016 Range Rover running a red light and speeding through a busy intersection, where it smashes into at least three other cars before coming to a stop in a steaming heap in the middle of the road. Two men get out of the vehicle and can be seen walking away the scene — but not before one of them returns to car to retrieve even more items than he was carrying when he first exited the Rover.

The footage was shared online by the Los Angeles Police Department (LAPD), who said the Range Rover was traveling at a high rate of speed northbound on Hayvenhurst Avenue when it ran the red light and collided with a 2018 white Toyota Camry that was headed eastbound on Nordhoff Street. The Range Rover then collided with a gray Honda Civic and white Toyota Tacoma traveling westbound Nordhoff. The force of the multi-vehicle collision caused the Rover to continue in a northwest direction north of Nordhoff before coming to rest.

“This multi-vehicle collision resulted in a fatality and moderate injuries to the other victims involved,” police said. “The Los Angeles Fire Department responded to the scene and pronounced the driver of the gray Honda dead at scene. The driver was a female approximately 56-years-old and her identity will not be released until next of kin has been notified. She had a male passenger inside her vehicle who was transported to a local hospital with moderate injuries.”

Police said the driver of the Camry was alone in her car and treated at the scene for minor injuries, while the sole occupant of the Tacoma did not sustain any visible injuries from the collision.

Police are asking anyone with information that could lead to the apprehension of the suspects to contact the Valley Traffic Division Office at (818) 644-8117.