The village of Nyang’oma-Kogelo rose to global attention with Obama and faded with his exit from the White House. 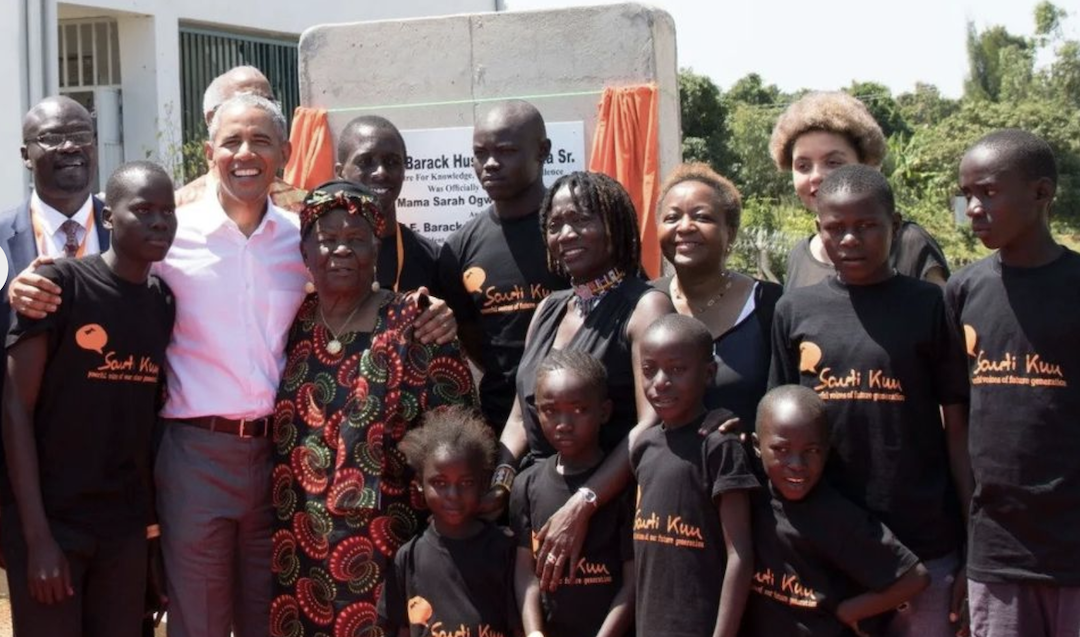 President Barack Obama together with his Kenyan family members during the official opening of the Sauti Kuu empowerment center in Kogelo village on July 16, 2018. (Courtesy Sauti Kuu Foundation)

KOGELO, Kenya — Barack Obama’s ancestral Kenyan village boomed during his time in politics, but now visitors and benefactors have all but disappeared – ruining the local businesses and charities that depended on them.

Kogelo, the remote village where the 44th president’s father was raised, attracted swarms of diplomats, philanthropists,  investors, fame seekers, and selfie-loving tourists during the Obama presidency. Now, said Humphrey Kosiele, a Kogelo resident, that boom has busted.  “We are back to where we were before the fame,” he told Zenger.

For nine years, Kosiele ran a successful grocery store at Nyangoma market in Kogelo’s center, but he shuttered his business in 2017 due to what he describes as a “disappointing business environment.” Obama stepped down from the U.S. presidency on January 20, 2017. “After Obama left office, things turned gloomy. Visitors vanished, and that is how most businesses died, including mine.

From 2004 – when Obama first won his U.S. Senate seat – hundreds of local and foreign visitors streamed to his father’s birthplace.

That stardust settled deeper on the village when Obama visited in August 2006, as rumors swirled that he was seeking the Democratic Party’s nomination for the president in 2008. What had been a trickle of interest became a swirling flood of high-end SUVs and tourist buses eager to glimpse the African roots of the man who would make history as the U.S.’s first president of color.

In those halcyon days, the Kenyan police cordoned off the home of Mama Sarah Obama, to protect her from near-constant requests for photographs and conversations. She died, aged 99, in 2021.

Local investors flocked to the village, dizzy on the chance to cash in on the gold rush of Obamamania sweeping the world.
Barack Obama Sr. was every bit as big a man in the village as his son was on the global stage. He donated land for both of the village’s schools and named each of them after his son.

“Obama’s 2006 visit led to Kogelo’s transformation, and things got even better when he became president,” Johannes Oduor, a village resident, told Zenger news.

And as Obama was swept to power in the White House, change started to flow through the tiny village where the last great infrastructure project had been a bridge built in 1930, during the British colonial period.  The village got its first connection to the regional electrical grid and even a police box to cope with the new tourists.
But now – five years after Obama left the White House – the once-bustling, busy village, as sophisticated as squeezing a buck from a tourist as any modern city, is back to its old sleepy days.

The expensive 4X4s and celeb-safari vans full of curious tourists are gone, replaced by the few personal cars and trucks ferrying farm produce.
The now-deserted Nyangoma market, once the lively center of the famous village, shows how Kogelo’s fortunes have changed after Obama’s exit from the world stage.

Bernard Wendo, a 42-year-old taxi operator at Nyangoma market, said the hype, fame, and international focus on the village vanished after Obama left office, just as suddenly as it had appeared 16 years ago. “Initially, this village would be full of foreign dignitaries, government officials, students, tourists, journalists, and researchers, but that is no longer the case,” he told Zenger news.

Dennis Weloba, 35, a barber at Nyangoma center, is among the few whose businesses are still going. But, he said, it is struggling. Weloba says he used to make $10 a day tending to throngs of visitors during the Obama era but struggles to make $2 today. “Life was good back then,” he told Zenger, “but now we are surviving by the grace of God.”

The taxi business flourished during Obama’s time. However, there are no longer automobile taxi ranks in the town. Bicycles and motorcycle taxis, commonly known as bodabodas, are now the main mode of transport.  Andrew Jumba, 56, was forced to sell off his taxi after things went south. “I had to sell the car so that I could repay a loan which was overdue, and the bank was on my neck,” he told Zenger. “When tourists were coming, money was in plenty, and servicing my loan was no problem, but life became hard when they disappeared.”

Many of his fellow taxi operators sold their vehicles or relocated to the nearby Siaya and Bondo towns. Bernard Omondi started a small shop selling farm equipment to newcomers who bought farms in and around the village, anticipating a windfall selling crops to hotels and restaurants. After Obama’s retirement, he says, tourist revenue slowed to a trickle, forcing most businesses to close.

“Farmers had a big market for their produce, but with hotels closing and people moving to nearby towns, many abandoned their farms,” he told Zenger.

Investors in hotels and restaurants, who set up top facilities to cater to Nyangoma-Kogelo’s high-profile visitors, also count their losses. “The hotel industry was the most vibrant sector in this village,” Nicholas Rajula, the owner of Kogelo Village Resort, told Zenger. The resort attracted hundreds of visitors per month in its heyday, but it is a shell of its former self today, almost deserted.

“We relied on foreign visitors and tourists, and when they stopped coming, I had to look for other options. I have turned a section of the hotel into residential homes.”

The only operational facility—albeit partially—is the Barack Obama Hotel, owned by Malik Obama, Barack’s half-brother, most remembered for backing Trump for the presidency in 2017.

But with Obama’s exit, Nyangoma-Kogelo has lost more than jobs and income. Charities, which relied on tourist donations, also dried up. Some funded scholarships for poor students, others financed medical care. Now, almost all of them are gone – leaving behind interrupted lives and shattered hopes.

After Mama Sarah Obama’s death in March 2021, a vocational training center she helped set up to train orphans in artisan courses, closed down. Charitable appeals in her name no longer worked.

Marsat Onyango, who oversees operations and administration at the foundation, said that fewer donors meant most projects begun during Obama’s presidency had to be halted. “The scholarship program was the most affected with diminished funding, forcing us to reduce the number of students receiving support,” she told Zenger. “However, we are working both locally and internationally to seek new and more partnerships to help us keep hope alive in this community.”

Some big plans are still underway, albeit at a reduced pace. Obama’s half-sister, Auma Obama, is still engaged in education, personality development, and sustainable economic development projects through her foundation of the same name. She said plans are underway to kickstart the construction of Barack Obama University on a 90-acre piece of land earmarked in Kogelo. “Mobilization of funds is on, and it is our hope and prayer that this project will sail through,” Jacob Wakoli, the infrastructure and projects coordinator at the foundation, told Zenger News.

“The Barack Obama University will be a landmark project for us. It will lift education standards in the community and also spur economic growth in this area.”

In July 2018,former President Barack Obama traveled to Kenya to promote the opening of a sports and training center sponsored by Auma’s foundation.

Some community leaders worry about dishonoring Obama’s legacy.  “We hope that we can salvage the situation and save the projects from dying,” Willys Ochiel, one of the community leaders, told Zenger. “We believe that Obama will one day come for another visit, and we do not want him to be disappointed by our laxity.”

Others count the blessings that they have already received. Hesbon Ochieng, 74, a community leader, says their tiny village would have struggled to access necessities were it not for the Obama connection. “Our community has running tap water, electricity, good schools, a health center, and good roads, all which came under his name,” he told Zenger.

Ochieng said the community leaders also plan to revive the Obama Kogelo cultural center to preserve the village’s history. “Future generations must know that it was Obama who gave this village global recognition, and we can only do that by preserving his legacy and the good deeds his name brought to this community.”

Edited by Kipchumba Some and Anindita Ghosh