The 8-ton sea giants were turned back and returned to deep water. 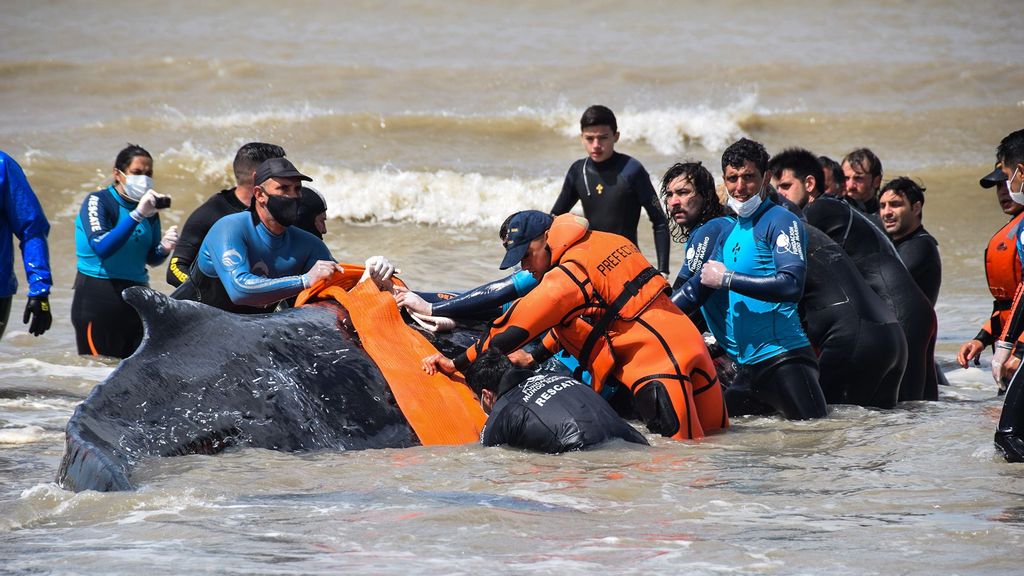 One of the two whales rescued after being stranded on the Buenos Aires coast. The juvenile female humpback whale was 32 feet long and weighed approximately 8 tons. (Mundo Marino/Zenger)

Two beached humpback whales have been rescued in Argentina by volunteers over a 48-hour period amid concerns of a growing trend of stranded marine animals in the country and in neighboring Brazil.

The beached whales were found in the coastal area of La Costa Partido in the eastern Argentine province of Buenos Aires on the morning of Oct. 3 and the evening of Oct. 4.

Volunteers with the Mundo Marino Foundation carried out the rescue operations with the assistance of the Ministry of the Environment and Sustainable Development.

“Upon arriving at the scene to verify the animal’s situation, the primary support tasks were immediately carried out, [which] are to ensure the correct position of the specimen, so it can breathe, and to keep the pectoral fins underwater to facilitate the stabilization of its body temperature as much as possible.

“This became difficult as the whale, with the force of the waves, turned and had its blowhole underwater for a moment, being exposed to water entering its lungs. Thanks to the quick action and technical ability of the rescue team, they were able to quickly straighten it out,” Heredia said.

Using floats and special slings placed under the whale’s body, the rescuers managed to assist it back to open sea.

“Shortly afterwards, the animal began to swim under its own steam and managed to get away from the coast,” the Mundo Marino Foundation said in a statement.

The Foundation’s vice president, Andrea Cabrera, said the rescue operation was “carried out in less than an hour [which] makes us very happy.”

On Monday evening, another humpback whale, a young male around 28 feet (8.5 meters) in length and weighing around seven tons, was found beached, and Foundation members arrived on the scene to monitor the animal’s situation.

Experts decided it was better to carry out the rescue operation at 6 a.m. the following morning when the team could work with better visibility.

The whale was in a stable condition, and Foundation members monitored the situation until the rescue was successfully carried out early the next day.

“Unfortunately, these events are not isolated cases and simply add [up] to a worrying trend of stranded marine animals being found in Argentina and Brazil in recent months,” Foundation officials said.