Rescue haul includes 3-year-old Simba, once forced to perform in a music video while visibly injured. 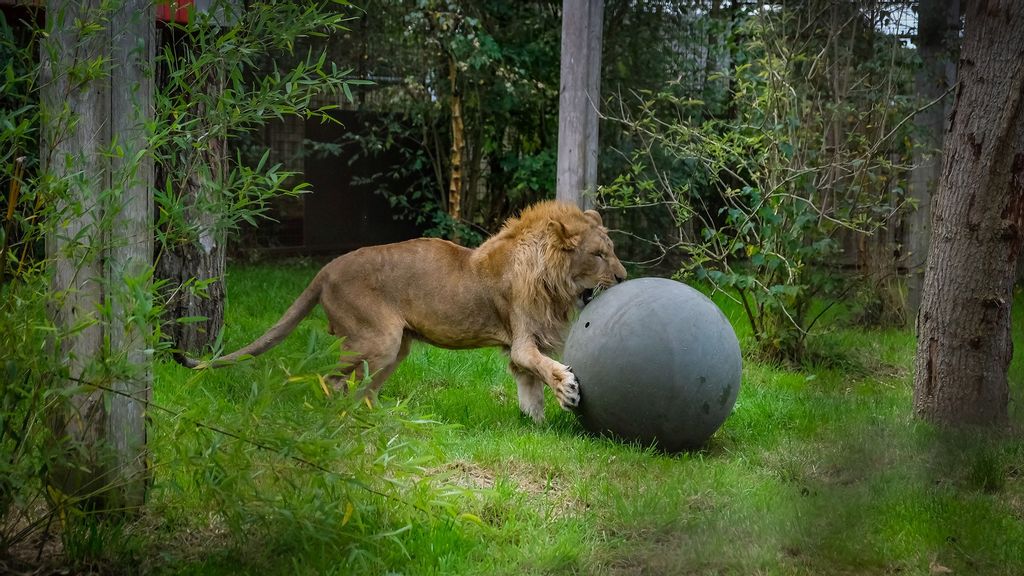 The king of the jungle can roar again.

Seven lions have been rescued from a Romanian “Joe Exotic”-style breeder, including 3-year-old Simba, who made global headlines when he was forced to perform in a music video in poor physical condition.

The rescue was carried out by the global animal-welfare organization Four Paws on Sept. 29.

The big cats, three females and four males, arrived at the FELIDA Big Cat Sanctuary in the Netherlands on Oct. 4. There, they will be treated and sterilized.

Four Paws said the lions were being kept in unsafe conditions at a breeding center in Picior de Munte, 50 miles outside of Bucharest, the capital. The previous owner has not been named.

The rescue was complicated by the fact that all but two of the lions were kept in the same unsafe enclosure.

“Our team of vets had to put several lions under anesthesia at the same time in order to get them out,” said Ioana Gabriela Dungler, director of the Wild Animals Department at Four Paws.

“The former owner kept and bred lions on his private property legally, but was also involved in illegal trade and abuse for entertainment productions. Since the owner refused to part with the parents of the seven rescued lions, along with a recently born cub, they had to stay behind,” said the organization.

Only two of the lions, Elsa and Simba, have names. Dungler hopes supporters will help choose the rest.

“The conditions we encountered were challenging even for our experienced rescue team and required maximum security measures. As long as dangerous wild animals, such as big cats, are kept in inappropriate cages only secured by a questionable fence, the safety situation remains concerning,” Dungler said.

Although the owner had previously agreed to permanent contraception for the lions that stayed behind, he changed his mind during the mission — and Four Paws was not allowed to treat the male lion.

“The female lion received anti-conception to temporarily stop the breeding on-site, allowing Four Paws to continue negotiations with the owner to end the inappropriate keeping for good and hand over the last lions into species-appropriate care,” Four Paws said.

The long-term rescue goal is to “bring the five youngest lions to its LIONSROCK Big Cat Sanctuary in South Africa as soon as possible, where they can keep living as one group in spacious surroundings.”

Simba was in the news in 2020 when he was used in “a music video of a Romanian musician, visibly in poor condition and with multiple injuries on display.” This led to a public outcry, resulting in the authorities seizing Simba, who was later returned to his owner, as he had a license to keep lions.

“Simba could not be reunited with the other lions as his father rejected him and was kept alone in a tiny enclosure. Romania banned the keeping of big cats and other wild animal species in circuses in 2017, and private keeping is only allowed with a special permit,” Dungler said.

“Simba is only one sad example of thousands of wild animals that are exploited and abused for commercial trade, such as entertainment, in the EU and beyond. He will now need lifelong special care.

“Romania has taken important steps by regulating the keeping of big cats, but as long as animals are suffering and private persons are allowed to keep and exploit them in inappropriate conditions, there is more work to be done.”

The FELIDA Big Cat Sanctuary in the Netherlands is one of multiple Four Paws sanctuaries worldwide for rescued wild animals. It functions as a special-care facility for physically and mentally traumatized big cats.

“The big cats that recover from the hardships of their past can be transferred to LIONSROCK Big Cat Sanctuary in South Africa. Animals that need lifelong intensive and special care stay at FELIDA.”

The actual Joe Exotic, aka Joseph Allen Maldonado-Passage, claimed he was the most prolific tiger breeder in the U.S .and one of the world’s top experts in caring for big cats. He is serving a 22-year prison sentence after being found guilty of murder-for-hire and animal abuse.

Netflix announced the TV show “Joe Exotic” will return for a second season on Nov. 17.