VIDEO: Coast Guard Helicopter Rescues 4 From Yacht That Ran Aground

Crew in Iceland hoists the men aboard despite high winds in the middle of the night. 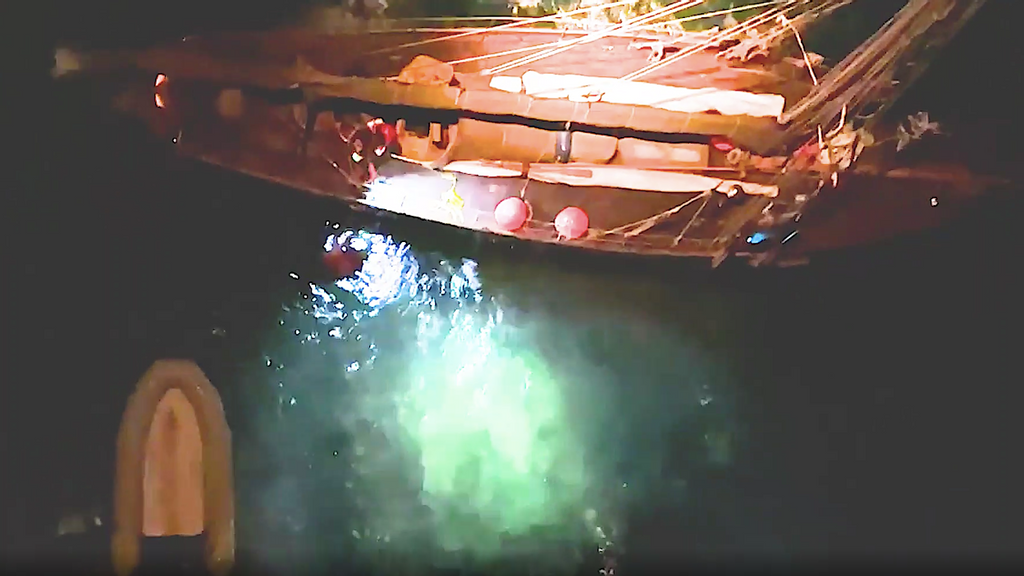 A crew from Iceland's Coast Guard executed a nighttime helicopter rescue of three Englishmen and an Icelander after their yacht ran aground in shallow water on Oct. 5, 2021, at Æðey in Ísafjarðardjúpur. (Icelandic Coast Guard/Zenger)

A crew from Iceland’s Coast Guard hoisted three Englishmen and an Icelander to safety after their yacht ran aground in shallow water at Æðey in Ísafjarðardjúpur.

Video shows a rescuer being winched down from the helicopter to the stranded sailors. It is pitch black and the coast guard crew is able to do their work only by artificial light. The four sailors are safely brought aboard the helicopter sometime after 2 a.m. Oct. 5.

“The Coast Guard’s control center received a report of the beach being vacated after midnight,” the Coast Guard said. “The crew of TF-GRO, the Coast Guard’s helicopter, was immediately called out, as were the sea rescue teams of the Landsbjörg Accident Prevention Association in the Westfjords.

“Gæslan’s command center also requested that the crew of the research ship Bjarni Sæmundsson stay in the area, which took place in Ísafjarðardjúpur. No leaks came to the ship by the shore, the weather was not good but the four crew members did well while waiting for help.

“The research ship Bjarni Sæmundsson and the rescue ship Kobbi Laki were first on the scene but could not reach the ship due to darkness, weather and shallow water. For that reason, it was decided to hoist the four crew members on board a Coast Guard helicopter that arrived at the scene before two o’clock last night. There was a considerable wind in Ísafjarðardjúpur and the mast of the schooner made the hoisting demanding as well.

“At 2:15 all the crew, three Englishmen and one Icelander had boarded the TF-GRO. They were flown to Ísafjörður for treatment. The survey vessel Baldur was called out to help bring the boat back to the surface, but it was during measurements in the vicinity.

“By the time the boat arrived this morning, it was back afloat. It now runs on its own engine power and sails to Ísafjörður accompanied by the surveying ship Baldur and the rescue ship Kobbi Laki,” the Coast Guard said.

Neither the four sailors nor their rescuers were named. Their condition is also unclear, as is the reason why they became beached in shallow waters. The make and model of the vessel is also not known.

The Icelandic Coast Guard‘s operations “are based on gathering, analyzing and distributing information in close cooperation with neighboring countries to create a surface picture as accurate as possible at any given moment to ensure maritime safety and security,” its website says.

Iceland, which meets the Greenland Sea on the north, the Norwegian Sea on the east, the Atlantic Ocean on the south and west, and the Denmark Strait separating it from Greenland, has a coastline of more than 3,000 miles.