Although the UN recognizes that menstrual hygiene is a human rights issue, the products have become a luxury item. 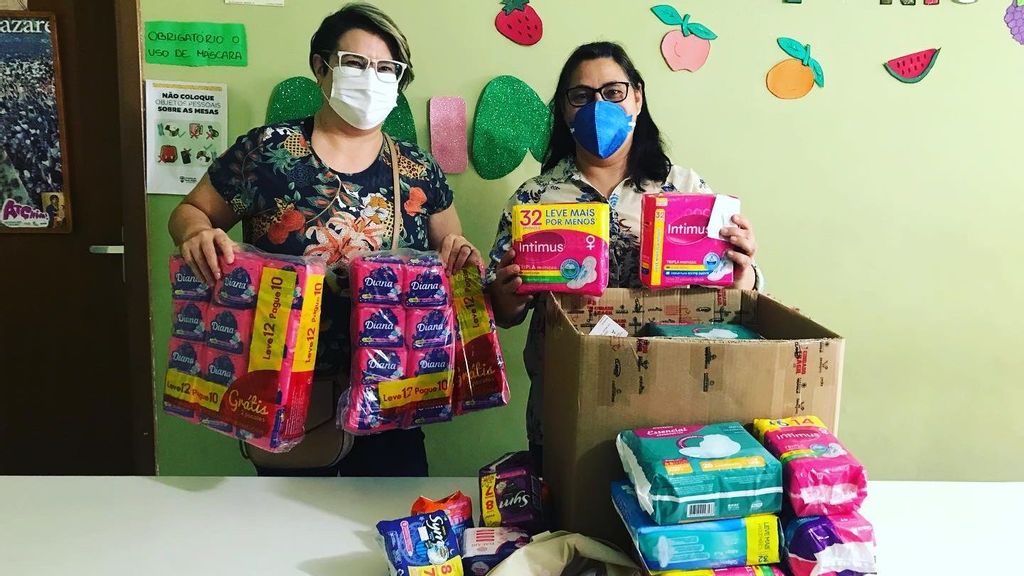 Period pad donations have enabled dozens of low-income Brazilian women to obtain an item that they are often unable to purchase. (Courtesy of Maria H. Sarquiz)

PORTO ALEGRE, Brazil — Some call period pads a “luxury item” in Brazil. In supermarkets, a pack of 32 pads costs on average $4, while 8-pad packs cost almost $1.50.

The inflation of the Brazilian real and the lack of free pad distribution throughout the country have caused menstruating people to seek out alternatives, such as old pages of newspapers, used pads, tree leaves and even pieces of bread.

Data from the Menstrual Poverty in Brazil report, prepared by the United Nations Population Fund (UNFPA) and the United Nations Children’s Fund (UNICEF) shows that 713,000 girls have no access to a bathroom or shower in their homes, and schools have a need for more than 4 million essential menstrual items.

In 2014, the United Nations (UN) acknowledged that a woman’s right to menstrual hygiene is a matter of public health and human rights.

Yet, Brazilian women living in poverty and vulnerable situations sometimes do not have access to basic sanitation services, materials for personal hygiene or information about their biological processes.

In the city of Porto Alegre, in the Ilhas da Pintada, Flores, Marinheiros e do Pavão, some 5,000 girls and women do not have the means to buy a menstrual pad pack, according to Father Rudimar Dal’Asta, 51, a priest at the Nossa Senhora da Boa Viagem church, located in Ilha dos Marinheiros.

“I receive donations from the NGOs here on the church grounds, and then I go from door to door to give the pads to keep crowds from gathering. Many women, including the youngest ones, have to decide between buying pads or a bag of beans to put food on the table,” he said.

“It’s a sad choice that should not be that way. Many of the island families, especially women, work in waste recycling plants and the money they earn is not enough to support their families.”

Since May, the priest has received menstrual pad donations to help impoverished families who, for the most part, live irregularly on the four islands that are part of the city of Porto Alegre. He receives the donations at the end of each month and has support from volunteers who work in NGOs such as Absorventes do Bem and Movimiento por uma Infância Melhor.

Thalia Gonçalves Dallpra, 24, lives in Ilha dos Marinheiros and is one of hundreds of women who receives a pack of period pads from the priest at the end of every month. She and her partner, Augusto Mateus dos Santos, 22, work at a waste recycling plant on the island. Each receives a salary of around $100 a month, well below the Brazilian minimum wage, which is about $205. Thalia and Augusto have three young children, two girls and a boy, and they all live with his mother and a cousin.

“When I do not have pads, I use a cloth; it’s the only way to avoid staining. Everything is expensive and whenever I go to the supermarket, I have to think first of my children’s needs, before my own,” said Thalia.

Liane Antonia Souza Farias, 61, works as a volunteer in the Nossa Senhora da Boa Viagem church and helps distribute the pads to the community every month. She is a grandmother of three young women, aged 17, 18, and 20, and says that her granddaughters often ask her for pads, since they do not have enough money to buy them.

“If I get some, I always give them away, but some women who do not have access to pads use a piece of cloth or some toilet paper,” she said. “Not only is it uncomfortable, it does not absorb the flow completely and women have trouble getting used to it, but what else can they do?”

Souza Farias recalled when she was 38 and lived an embarrassing moment on a bus. “A passenger warned me that I had a blood stain on my pants. I almost died of shame, it was horrible; luckily, I had a jacket that I put around my waist to cover the stain,” she said.

Maria Helena Sarquiz, 47, from Porto Alegre, said that the idea to create the NGO Absorventes do Bem came after watching the Netflix documentary Absorvendo o Tabu (“Period. End of Sentence.”). The 25-minute short film features a group of women living in North India, 37 miles from New Delhi. With the donation of an innovative machine, they open a small factory of low-cost period pads, made with local biodegradable raw material.

“The documentary moved me a lot and I looked for information about the precarious situation of women in Brazil, in my hometown. At that time, I was living in China and when I returned to Brazil, in 2019, I started to donate food and clothing. In 2020, during the pandemic, I realized I could do more, and that’s when I created the non-profit NGO Absorventes do Bem on social media,” said Sarquiz.

Period pad collection points for impoverished and low-income people are distributed in several places in Porto Alegre, such as volunteer homes, bars, and laundry spots.

“I did not imagine it would have this reach. There are many people helping, donating money or packages of towels. Even the men have helped a lot,” said Sarquiz.

“The first donation of 5,500 period pads was made in May, and was intended for girls going through puberty and women living in extreme poverty on the islands around Porto Alegre. The following month, we received another 1,500,” she said.

One of the institutions benefiting from donations is the NGO Movimiento por una Infância Melhor. The organization helps 100 children and teenagers for free outside of school hours in Vila Bom Jesus, one of Porto Alegre’s toughest neighborhoods. In August, the organization received 940 period pads. “Twenty-five children of menstruating age have been benefited,” said Mônica Rossi, 38, a journalist and volunteer at the NGO.

In Porto Alegre, the Municipal Chamber is processing a bill that provides for the distribution of period pads for low-income students in the municipal education system. Councilwoman Mônica Leal (PP) is the author of the bill, which proposes the distribution of the pads throughout the municipality to students in impoverished conditions. The bill is still pending in the committees of the Porto Alegre Municipal Chamber.

In the city of Farroupilha, in Rio Grande do Sul, council members approved a bill on September 14, drafted by councilman Juliano Baungartem (PSB). The bill proposes a program for the supply of period pads in the municipality’s public schools. The proposal has been sent for Mayor Fabiano Feltrin’s (PP) approval. If approved, it should go in effect in 90 days.

On the same date, the Brazilian Senate approved a bill that provides the free distribution of pads to elementary and middle-school girls, impoverished women and women behind bars who are from 12 to 51 years old. The bill, presented by Senator Zenaide Maia (Pros-RN), was approved without changes.

President Jair Bolsonaro rejected the article in favor of the free distribution of sanitary pads, noting that there is no mention of how the project would be financed.