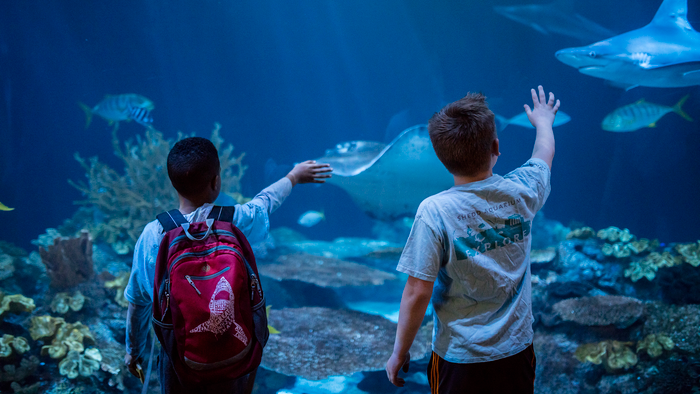 Scientists at Chicago’s famous Shedd Aquarium were stumped by the disappearance of anti-parasitic medications until they found the sneaky culprits — microbes.

“Shedd Aquarium’s quarantine habitats behind the scenes are a first stop for animals entering the building, allowing us to safely welcome them in a way that ensures outside pathogens are not introduced to the animals that already call Shedd home,” said Bill Van Bonn of Shedd Aquarium.

During the quarantine process, all the animals are bathed in water containing anti-parasitic chloroquine phosphate medication to treat a variety of illnesses. After adding the medication directly to the water, the aquarium staff measure its concentration.

“They need to maintain a certain concentration in the habitats to treat the animals effectively,” said microbiologist Erica Hartmann of Northwestern University. “But they noticed the chloroquine was mysteriously vanishing. They would add the correct amount, then measure it, and the concentration would be much lower than expected — to the point where it wouldn’t work anymore.”

Hartmann and her colleagues worked with Van Bonn to “catch the thief,” publishing a study that appeared recently in the journal Science of the Total Environment.

Together, they conducted microbial and chemical analyses of the saltwater aquarium systems. What they found was not just one thief but millions of microbes that were feasting on the nitrogen suspended in the water.

Hartmann, who noted that carbon, nitrogen, oxygen and phosphorous are the building blocks of life, said when the research team looked for the medicine, they found it had been degraded. “The piece of the molecule containing the nitrogen was gone. It would be the equivalent [of] eating only the pickles out of a cheeseburger and leaving the rest behind,” she said.

“If you have ever had an aquarium at home, you probably noticed grime growing on the sides. People sometimes add snails or algae-eating fish to help clean the sides. So we wanted to study whatever was in the water and whatever was stuck to the sides of the surfaces,” she said.

During the investigation, the scientists not only determined the microbial basis for the disappearance of the medicine but also identified the responsible microbes. Hartmann’s team cultured the microbes and fed them chloroquine as their only source of carbon, but the results were inconclusive. Next, they conducted a sensitive analytical chemistry study of the degraded chloroquine. “If the chloroquine was being eaten, we were essentially looking at the leftovers,” she said. “That’s when we realized that nitrogen was the key driver.”

Of all the microbes collected, the researchers identified at least 21 different suspects clinging to the inside of the habitats’ outlet pipes. Some of these microbes have never been studied before.

Hartmann said the pipes might need to be scrubbed or replaced to keep the chloroquine from disappearing. Also, regular switching between freshwater and saltwater may be a solution because microbes are typically sensitive to one or the other.