One of the most indestructible forms of life was discovered in a rare-find fossil from hundreds of millions of years ago. 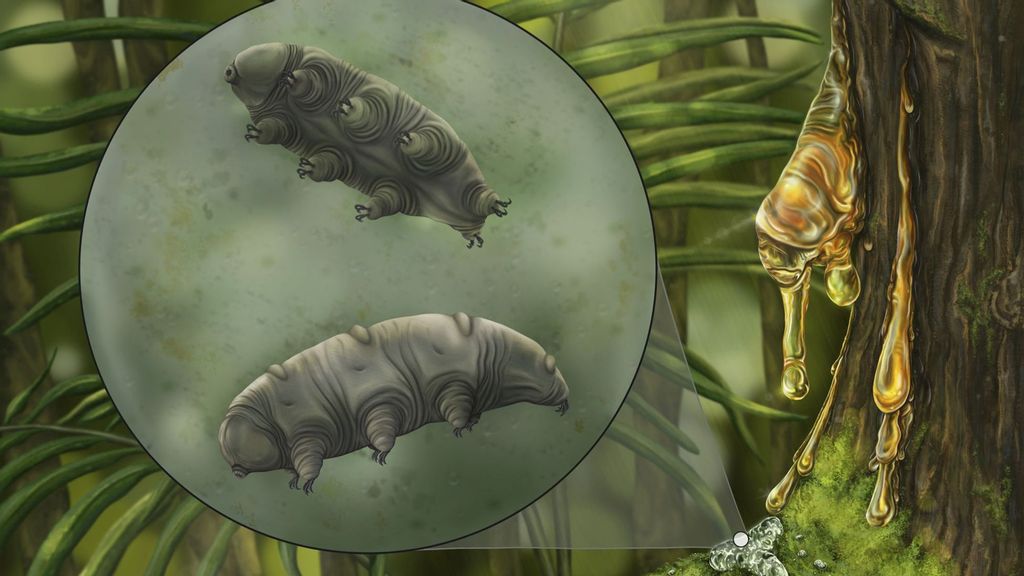 A new species of tiny “indestructible” water bear has been found fossilized in a chunk of amber dating back 16 million years, according to the New Jersey Institute of Technology and Harvard University.

The water bear, called a tardigrade, is usually about 0.02 inches long when fully grown. They are known for surviving five mass extinction events and for coming back to life after spending years frozen in the Arctic. Thus, the “indestructible” characterization.

The tardigrade frozen within a Dominican amber chunk is just half a millimeter long.

“The discovery of a fossil tardigrade is truly a once-in-a-generation event,” said Phil Barden, the senior author of the study on the findings and assistant professor of biology at New Jersey Institute of Technology.

The specimen dates back to the Miocene period, and according to the study published in the Proceedings of the Royal Society B: Biological Sciences, is a new genus and species that the researchers named “Paradoryphoribius chronocaribbeus.” They said it was a member of the modern tardigrade superfamily, Isohypsibioidea.

“What is so remarkable is that tardigrades are a ubiquitous ancient lineage that has seen it all on Earth, from the fall of the dinosaurs to the rise of terrestrial colonization of plants,” Barden said.

“Yet, they are like a ghost lineage for paleontologists with almost no fossil record. Finding any tardigrade fossil remains is an exciting moment where we can empirically see their progression through Earth history.”

Water bears are well known for their bizarre appearance and incredible self-preservation capabilities.

They are able to survive extreme conditions by curling into a dehydrated ball and entering a self-induced state of suspended animation known as cryptobiosis, in which their metabolism is almost entirely stopped.

“At first glance, this fossil appears similar to modern tardigrades due to its relatively simple external morphology,” said Marc A. Mapalo, a graduate student in Harvard’s Department of Organismic and Evolutionary Biology who contributed to the study.

“However, for the first time, we’ve visualized the internal anatomy of the foregut in a tardigrade fossil and found combinations of characters in this specimen that we don’t see in living organisms now,” he said.

The unique features allowed the researchers to place the tardigrade in a new genus and explore the evolutionary changes that the species has experienced during its multimillion-year existence.

Unearthing fossilized water bears is especially complicated because of their tiny size.

“Fossil amber with arthropods trapped inside is only known from 230 million years ago to the present … that’s less than half of the history of tardigrades.”

Prior to this discovery, only two definitive tardigrade fossils had ever been formally studied, and both were found in North American fossil deposits dating back to the Cretaceous Period, 66 to 145 million years ago.

“We are just scratching the surface when it comes to understanding living tardigrade communities, especially in places like the Caribbean where they’ve not been surveyed,” Baden said.

“This study provides a reminder that, for as little as we may have in the way of tardigrade fossils, we also know very little about the living species on our planet today.”

VIDEO: Rare Owls That Couldn’t Give 3 Hoots They’re Supposed To Be Extinct