JJ Yosh and his cat attracted nearly 1 million social-media followers with tales of their travels. 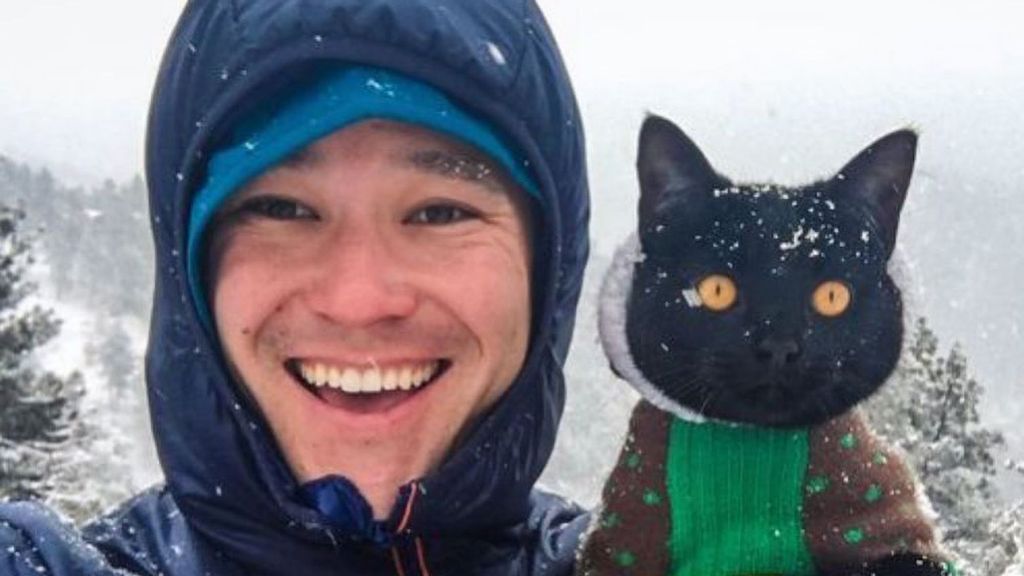 Footage shows the happy pair affectionately sharing car rides and outdoor climbs. And their relationship is a hit on social media.

Simon even has his own Instagram profile, where he calls himself ‘Simon Yosh the Adventure Cat’ and has 485,000 followers. He also says he loves to kayak, swim, rock climb and hike.

Owner JJ runs a video production company, but his viral photos and videos with Simon have secured him paid work as an influencer, promoting cat products and outdoor gear.

He says his photos and videos are so popular that Simon has been recognized by fans when the two are out. “Some of his fans have even sent us drawings of him they’ve done.”

“I adopted my cat Simon in 2016. He is my most important family member. I do everything with him, I take him on hikes in Colorado, but also road trips and other adventures. Most days, though, he is by my side around the house as I’m working,” said JJ.

“We mostly do day hikes on the trails near Boulder. Animals are allowed in some wilderness areas, so I have to make sure before I go that I can bring Simon. Sometimes, I take him on longer hikes where we camp.”

JJ has had a long relationship with cats.

“I had cats growing up and wanted one once I moved to Colorado,” he told Zenger. “I became more passionate about cats once I started taking Simon out with me and seeing how much he enjoyed the outdoors.”

JJ admits he prefers cats to dogs, but also has a few aquariums with fish.

So close are the duo, they even share the same food passion. “He loves eating shrimp. That’s my favorite food, too. Whenever I’m eating it, Simon tries to take some. He also likes tuna and salmon sushi.”

JJ has some advice for anyone thinking of getting a cat. “Cats are escape artists. Simon is really good at getting out of his harness when we are outside, so you have to keep a close eye on them, even when they are on a leash!” he said.

Though the two are bonded, JJ said his influencing work with Simon isn’t perfect. “When he falls asleep, it’s really hard to wake him up. Sometimes, he will fall asleep when we are doing a video shoot, and it’s hard to get him to ‘act’!”