Endangered northern bald ibis returns after being shown how to migrate by following a microlight aircraft. 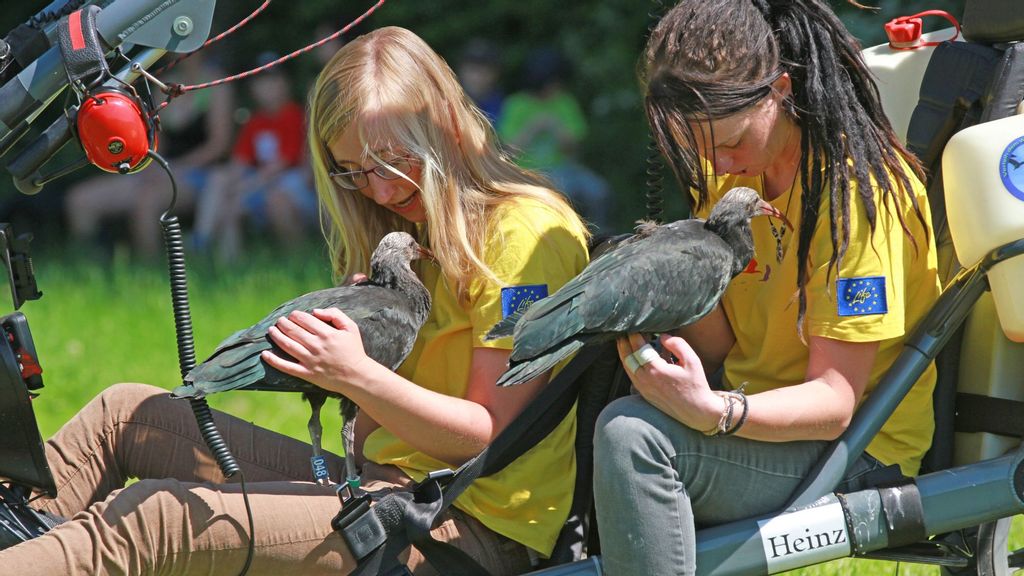 Juvenile northern bald ibises followed a microlight aircraft and their two foster parents from Salzburg, Austria, over the Alps and the Apennines to their wintering area at Laguna di Orbetello, Italy, as part of a conservation project. (Waldrappteam LIFE)

Robigus, a female, returned in an unusual way to her British foster mother who lives in Austria.

The Waldrapp Project trained the birds to follow a microlight aircraft by imprinting, in which an animal gains its sense of identification, to think that its human caregivers are their birth parents.

Rosegg Zoo, where Robigus was born, “has been a partner of the Waldrapp team for many years, one of the largest species protection projects in Europe, through which the birds are reintroduced and their migration tradition is to be taught to them. Colonies are bred and biologists fly paraplanes ahead of the young birds to show them where to move in winter,” the zoo said.

Robigus learned to fly south by following one of the more experienced birds from another colony that was brought in to teach her the way, said Lynne Hafner, who helps run the Rosegg Zoo project.

“The birds have to be taught to fly south in the first year otherwise they can never learn it,” Hafner said.

She said it is great that Robigus has come back, especially as she did not need to return home because at 2 years old, she is still too young to breed.

Her return this year was not straightforward. Conservationists learned that she spent some time in Slovenia and then flew to live near Graz Airport in Austria before heading home. She is expected to remain at her home in Austria for another month before flying south again.

When Robigus returns next year and mixes with birds living at the zoo all year round, conservationists hope she will breed and bring her offspring south when she migrates.

The Waldrapp Project, headed by northern bald Ibis expert Johannes Fritz, works to reintroduce the endangered species to Europe. Its numbers have dwindled to between 200 and 249 mature individuals in the wild, according to the International Union for the Conservation of Nature’s Red List of Threatened Species.

The success of the project will mean an additional migratory colony alongside those that have formed from the same core group in Germany and elsewhere in Austria.

Hafner said the road to the success started in 2004 when the colony was founded.

However, the project has been hampered by hunters, particularly in Italy, who take their toll on the birds as they fly south and then return to the Alps to breed.

The northern bald ibis was native in Central Europe until the 17th century. The species was nearly wiped out by overhunting and people stealing the eggs.