Police forced the trucker off the road and found he was five times over the legal alcohol limit. 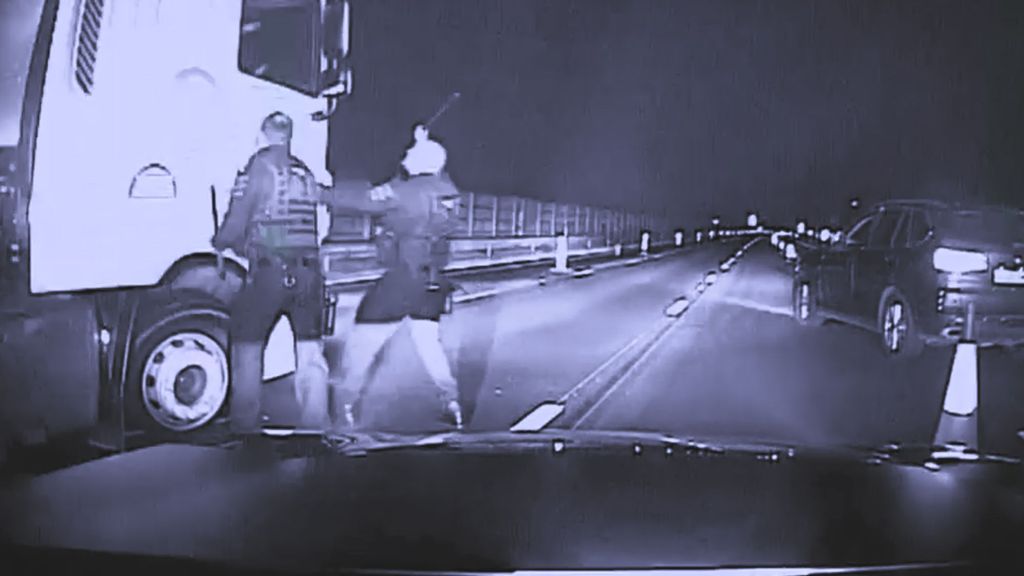 Officers hit the windows of the truck to prevent the suspect, Andrew Champion, from driving away on the M4 highway between southern England and Wales in early May. (Wiltshire Police/Zenger)

Wiltshire Police officers in the U.K. chased a drunken driver for over 20 miles before using a spike strip to stop the truck near Reading, England.

The incident on the M4 highway occurred on May 6. A spike strip uses rows of sharp, hollow spikes to deflates tires.

In the footage, PC Jay Clifton said he has been “on the roads policing unit for 17 years, and I’ve never seen anything like that before.” Police repeatedly bang on the stopped truck’s windows to get the driver’s attention.

Andrew Champion, driver of the 48-ton truck, was removed from the vehicle. Inside, officers discovered a half-drunk whisky bottle next to the driver’s seat. A breathalyzer test showed his breath alcohol content was almost five times over the legal limit in the U.K., according to police.

Champion was sentenced to 14 months in prison and banned from driving for four years and seven months.

The Wiltshire Police shared the footage on social media on Oct. 4 with the message: “An HGV [heavy-goods-vehicle] driver has been jailed for over a year after he was found to be nearly five times over the drink drive limit. Andrew Champion was first spotted driving his 44-tonne truck erratically on the M4 near Swindon.”

Champion was spotted veering between lanes. Police feared any oncoming car would result in fatalities.

“The truck weaved from the second lane on to the hard shoulder, missing a recovery vehicle and the vehicle being recovered by a couple of feet. How he didn’t hit them, I don’t know. It was terrifying,” Clifton said.

Clifton, part of Wiltshire’s Road Policing Unit, arrived on the scene first and saw the operator of a Highways Maintenance Vehicle had turned on his lights to warn road users of Champion’s erratic driving.

“He was effectively creating a rolling barrier on the motorway and slowing other members of the public down to stop them from passing and getting anywhere near the truck,” said Clifton.” That person’s actions, I’ve no idea who it is to this day, probably saved lives.”

Champion pleaded guilty to drunken driving and dangerous driving at Newport Crown Court on Sept. 27. Along with a jail sentence and fine of 156 pounds ($213), Champion will have to take an extended retest when his driving ban finishes.

After the sentencing, Clifton said: “It’s not the damage he could do to himself, which is going to happen. It’s the danger to other members of the public.

“Had he crossed the carriageway into oncoming vehicles, had he gone into the road works and hit a member of the maintenance crew — people could have died.”