Artificial lung device stabilized the mother until she could deliver her baby. She then received lifesaving transplant. 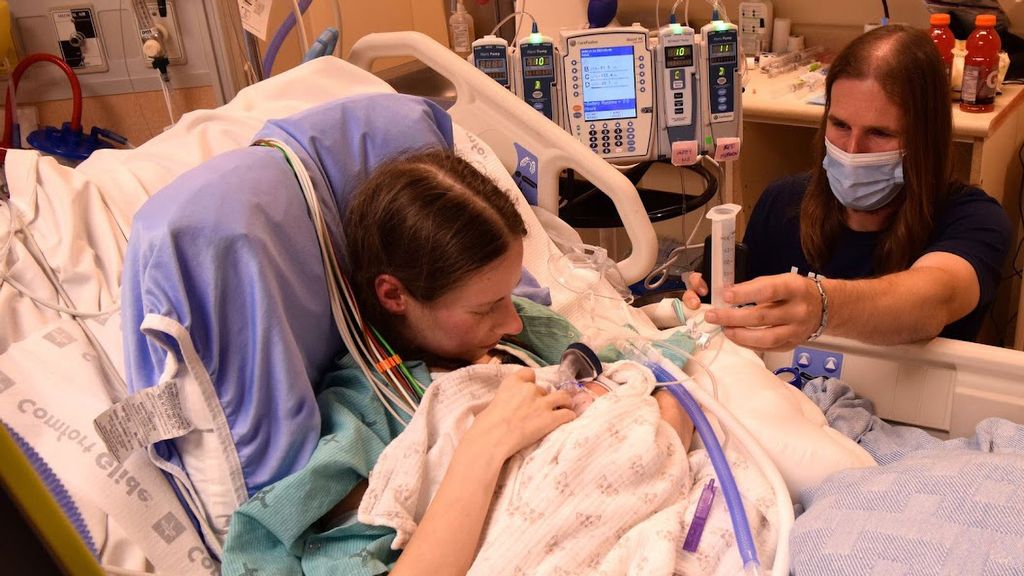 Candice and Collin Cruise feed 8-day-old Cameron at Toronto General Hospital on June 18. A team of specialists saved the mother by using an artificial lung device to keep her alive through the early delivery. She then received an urgently needed double-lung transplant. (University Health Network/Zenger)

Canadian doctors kept a pregnant woman in urgent need of a double lung transplant alive using life-support equipment developed for COVID-19 patients so that she could give birth.

After the birth at 29 weeks of her son Cameron, Candice Cruise received the transplant, medical experts from the University Health Network in Toronto said on Oct. 3.

“Physicians recommend that patients with pulmonary hypertension avoid pregnancy, given the high risk of death for the mother and baby,” according to the University Health Network. “However, Candice Cruise was unaware of her condition until she reached 21 weeks of pregnancy. The usual medical option at this time would have been to terminate the pregnancy as the only way to save the mother in this extremely high-risk situation.”

A team of specialists at Toronto General Hospital came up with a pioneering strategy to connect the woman to an artificial lung device called a Novalung. It artificially re-created the heart-lung blood flow, allowing doctors to stabilize the Cruise until she reached the 29th week of pregnancy so that the baby could be safely delivered and she could then be transported for the double-lung transplant.

Pulmonary hypertension is a rare, life-threatening disorder that leads to extremely elevated blood pressure of the arteries in the lungs. The increased pressure makes it difficult for the heart to pump blood through the lungs, which eventually causes the heart muscle to fail. The condition is especially dangerous during pregnancy since the growing fetus puts significant stress on the mother’s circulatory system.

Baby Cameron, who was born on June 10, was transferred to neonatal intensive care unit until he was ready to go home in September.

Cruise’s lung transplant was performed by the Toronto Lung Transplant Team at the Ajmera Transplant Centre. The identity of the donor is confidential. Cruise, who lives in Midland, Ontario, went home in August.

“Saving both the mother and the baby in this fashion, and then bridging the mother to a successful lung transplant, is another world-first achievement of the Toronto Lung Transplant Program at University Health Network,” the medical team said.

Regarding her decision to fight for her child, Cruise said: “I could feel the baby moving inside me, so strong. I knew there was nothing wrong with him, and I felt he had a good chance. I wasn’t ready to give up.”

Her husband, Collin, said: “We knew we had to prepare for the worst, which was very scary. … I wanted the safest approach to save Candice, but she kept fighting for our baby. So I put my trust in the doctors here, who are excellent. The whole team was amazing. They didn’t work only to keep Candice and Cameron alive, they really cared.”

Dr. Shaf Keshavjee, the University Health Network’s chief surgeon and the director of the Toronto Lung Transplant Program, said: “This case really touched our team. It happened in part during the third wave of the pandemic when we were losing many young people to COVID. Seeing Candice and her baby have a positive outcome, against all odds, brought joy and a glimmer of hope to everyone involved in their care.

“We had never seen a case like this. Pulmonary hypertension is a dangerous condition, even more so for pregnant women, with a high risk of death for both mother and fetus. We are incredibly happy that we were able to combine our expertise to be able to get Candice the support she needed to survive and have a healthy baby.”