Popcorn With Zenger: ‘The Many Saints Of Newark’ Is Far Better-Suited For A Series

Despite superb acting, “Sopranos” prequel falters by trying to cram too much into a single serving. 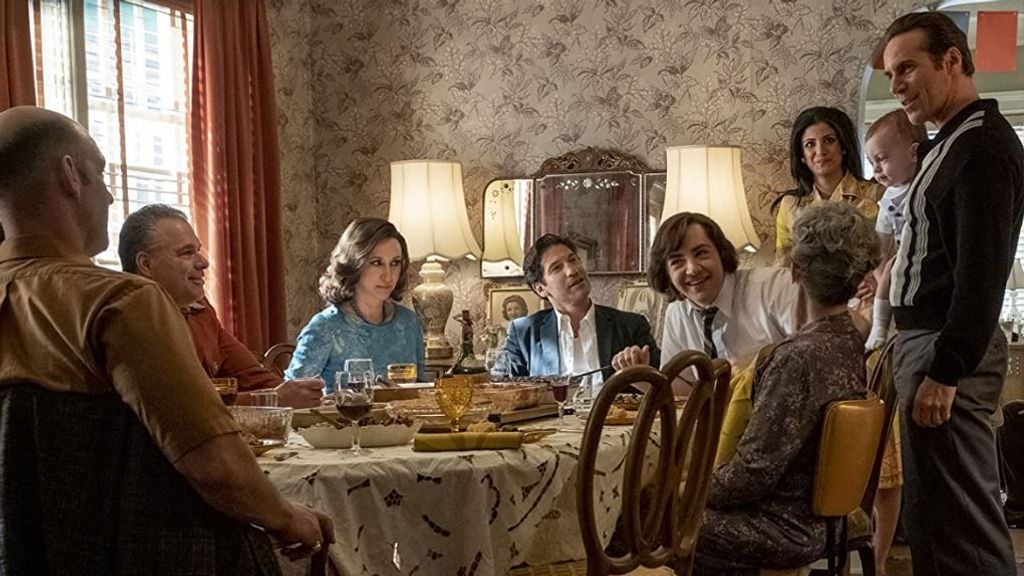 Michael Gandofini (seated with tie) plays a younger version of Tony Soprano, the character his real-life father made famous in the original “Sopranos” series. (Warner Bros.)

“The Sopranos” will go down as arguably the best-written television show of all time. The late James Gandolfini opened the world’s hearts to the character of Tony Soprano, a New Jersey-based Italian mobster. “The Sopranos” presented colorful characters and a realistic portrayal of the difficulties of balancing family life with being the leader of a criminal organization.

Series creator David Chase spent years balking at the idea of doing any kind of reboot or sequel for the series, especially after the sudden death of Gandolfini in 2013. But Chase was recently inspired by the events of the 1967 Newark race riots due to his family ties to the city. The event allowed Chase to come back to the table and create not a new series, but a prequel film set in that time period that would explain what led to Tony’s decision to join the family business.

The problem is, the story really doesn’t have much to do with Tony at all, which, depending on what you are expecting from this film, could be a good thing or a deal-breaker.

The Story: “The Many Saints of Newark” takes place in the late 1960s laying the groundwork for life for a young Tony Soprano. Dickie Moltisanti (Alessandro Nivola) is a soldier in the DiMeo crime family, which also consists of Tony’s father Johnny Soprano (Jon Bernthal), and his brother, Junior (Corey Stoll).

Riots begin to break out in Newark as the tension between the black and Italian communities, along with police brutality, reach a boiling point. While the city burns, Dickie has a falling out with his father, which has major repercussions for the DiMeo Family.

With Tony’s father Johnny in prison, Moltisanti takes charge of handling the family business and being a father figure to Tony. But he struggles to balance his own life between his family, his goomah Giuseppina (Michela De Rossi), and his former associate Harold (Leslie Odom Jr.) who now wants to move in on his territory in New Jersey.

Bright Spots: “The Many Saints of Newark” is a superbly acted film that feels very much like a “Sopranos” property. Standouts, such as Vera Farmiga as Livia Soprano and Ray Liotta pulling double duty as twin brothers “Hollywood Dick” Moltisanti and Salvatore “Sally” Moltisanti, complement great performances by other actors who wildly resemble younger versions of their television series’ personalities.

Gandolfini’s real-life son Michael plays a teenage Tony, and proves he was the right choice for the role. In addition, cinematographer Kramer Morgenthau is outstanding at bringing to life late ‘60s/early ’70s New Jersey in an authentic style.

The best aspect of the movie is that it focuses on characters that either didn’t have a backstory or didn’t have key details of their life explained by the original series. As we learn more about Dickie Moltisanti — who is the protagonist and at times antagonist of the film — we see him dealing with his relationship with his abusive father, focusing more of his time on his affair with his father’s wife than his own family, and dealing with a former associate who becomes inspired by the race riots to take control of his city for his own people. Having so many layered characters that add to the story makes for an interesting film but not a satisfying one.

Weak Spots: Chase’s decision to make a film rather than making an HBO Max series may have been the mistake that breaks “Saints of Newark.” The film tries to squeeze too many plot points and callbacks into a two-hour runtime and would have been far better served by a short series.

The central story focuses on the relationship between Tony Soprano and Dickie Moltisanti. However, the film focuses far more on other aspects of Dickie’s life and whenever that particular relationship is addressed, it feels too rushed to be credible.

As good as the performances are, the writing leaves much to be desired, in terms of character depth. Certain characters have flaws that don’t match how we remember them from the television series. Bernthal plays Johnny Soprano as far more ruthless and cold-hearted than he was originally portrayed.

The film’s biggest sin is that the only way it works is by adding something to a series that some would say is already perfect (minus those who have complaints about the ambiguous ending). When all is said and done, it is hard to feel like anything was gained. If anything, it adds more questions we may never get answers for.

The Takeaway: “The Many Saints of Newark” never comes to a satisfying conclusion showing the audience what led to Tony Soprano becoming the mafia boss that we all know and love. Instead, HBO attempted to tell a story about an Italian mob centered on a narrative of social injustice, leaving so many puzzle pieces on the table and so many “Sopranos” fans with an empty feeling.

See or Skip: “The Many Saints of Newark” is an intriguing idea, but there are too many flaws in a two-hour runtime to match the high bar that “The Soprano” series established.