Fists Of Fury: Tyson Plans On Making Quick Work Of Deontay Wilder In Their Third Matchup 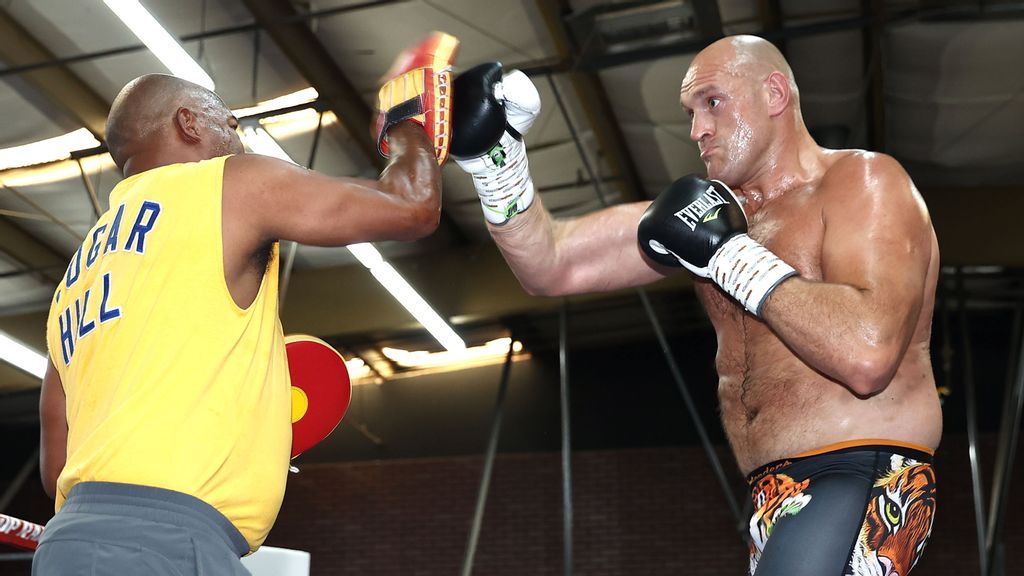 Trainer Javan “Sugar” Hill-Steward (left) wants WBC heavyweight champion Tyson Fury (right) to go after the knockout in every round” on Saturday against Deontay Wilder, whom Fury dethroned by two-knockdown seventh-round TKO in February 2020. (Top Rank)

Tyson Fury gave Deontay Wilder a literal licking during their second bout in February 2020, flooring him once each in the third and fifth rounds of a seventh-round TKO to become WBC heavyweight champion.

As blood dripped from Wilder’s left ear in the sixth round, the 6-foot-9 Fury licked some of it off his rival’s neck, explaining he had to “get the feeling of what my prey tasted like.”

“Every round is a knockout round, and I want Tyson to get it quicker than he did the last time. If Tyson doesn’t get it in the first round, then I want him to get it in the second,” said Hill-Steward, the nephew of the late Hall of Fame trainer Emanuel Steward.

Fury weighed 256 and a half; and 273 pounds, respectively, for each of the first two fights compared to Wilder’s 212 and a half; and career-high 231. Fury weighed 274 and 276 pounds, respectively, for fourth-round knockouts of Joey Abell in February 2014 and Sefer Sefari in June 2018, and reportedly is considering a career-high of 280 or higher on Saturday.

“It’s not about being physical or roughing him up or being old school, it’s just about basic boxing. You will see an improved Tyson Fury from the standpoint of basic boxing,” Hill-Steward exclusively told Zenger.

“Tyson is working on putting more power — not just in the right hand — but both hands to the point where he’s become a fighter with one-punch knockout power. The first fight went 12 rounds, and the second fight went seven, so I want to start this fight like it’s round No. 20.”

During a virtual press conference from Las Vegas on Sept. 29, Fury said that he hopes to encounter a more aggressive Wilder on Saturday.

“I hope he brings a better fight because [our] last fight was disappointing. I trained for an absolute war, and it was a one-sided beatdown, so hopefully he can give me a challenge,” said Fury, 33.

“It’s that time of the year again where I take over Las Vegas, and it becomes the home of ‘The Gypsy King.’ Just remember I plan to smash Deontay Wilder to bits … and I will.”

Wilder, who turns 36 on Oct. 22, dropped Fury once each in the ninth and 12th rounds of their first fight, but hit the deck himself in the third and fifth rounds of his TKO loss to Fury.

New trainer Malik Scott said Wilder boasts improved “speed, strength and physicality on the inside,” and will stop Fury “inside five rounds,” or “can win a 12-round decision.”

Fury plans to inflict more punishment on Wilder than he did in their last fight.

“I’m very motivated, focused, and determined, and I can’t wait for Oct. 9. I have to wait one more week until I get these big hands on Wilder for a third time,” Fury said last week.

“It’s one of the few heavyweight trilogies since Riddick Bowe and Evander Holyfield,” Fury said. “I’m going to go all guns blazing, full-out attack, all in victory, straight out of the door from round one until it finishes. It’s either going to be me or Wilder.”