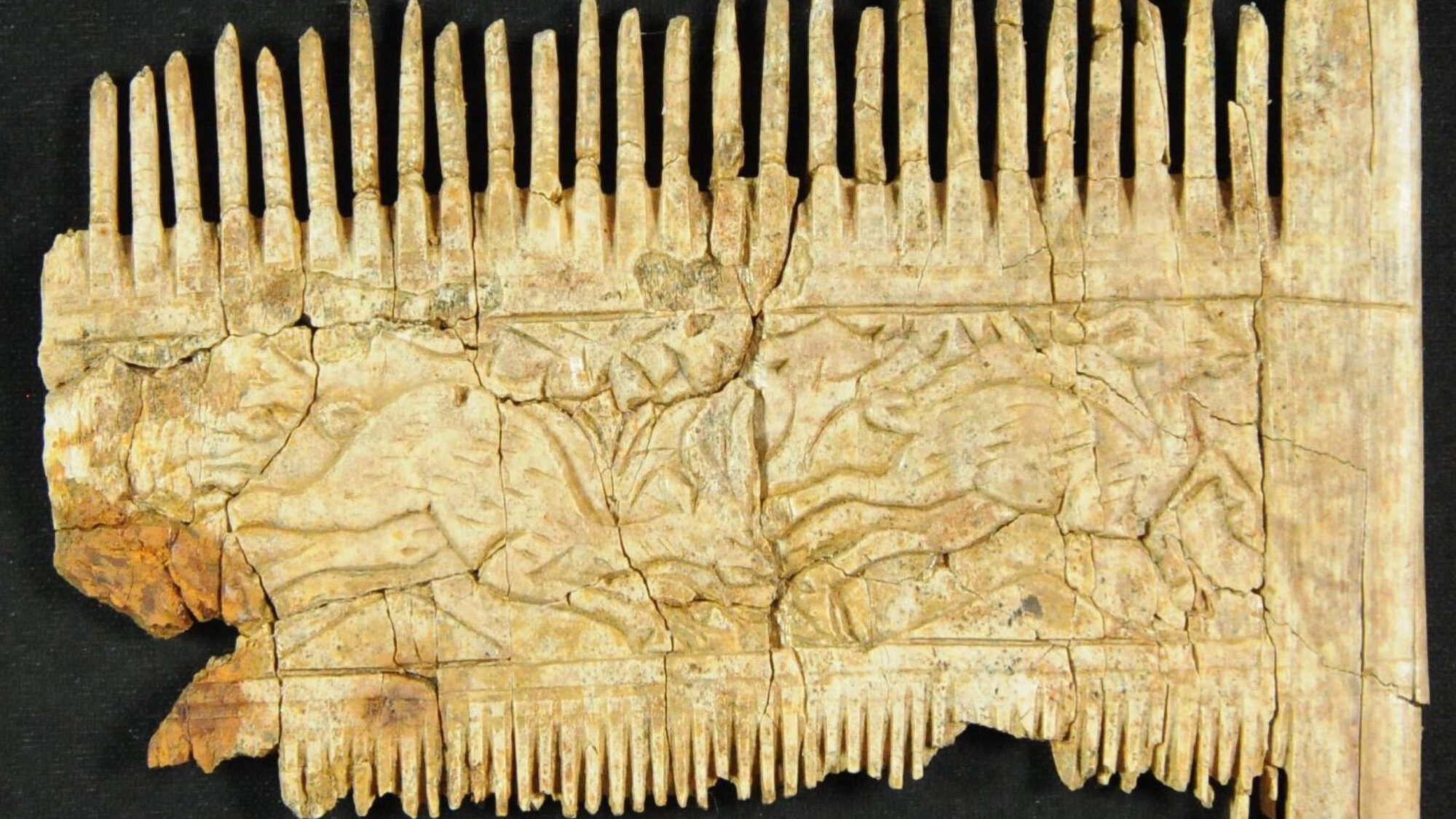 The back of a comb from the sixth century that has been restored after being found in a grave in Deiningen, Germany. (Bavarian State Office for Monument Protection/Zenger)

Archeologists have found valuable sixth-century objects including an ornate ivory comb with stunning carvings and a bowl from Africa in graves in Germany, the first such find north of the Alps.

“The two finds must have been real luxury goods at the time,” said Mathias Pfeil, curator-general at the Bavarian State Office for Monument Protection, in a statement Oct. 1.

The graves were found in an area being developed in the Bavarian municipality of Deiningen, Swabia in southwest Germany, which is rich in history and culture.

Carved into the comb are hunting scenes showing gazelle-like animals not found in Europe jumping away from predators. Such carved ivory combs from the sixth century are extremely rare, and the one found at Deiningen is the first displaying secular motifs.

The comb was found in the grave of a man between 40 and 50 years old believed to be a horse rider and a prominent personality among his contemporaries. The comb was in the remains of a bag that also contained scissors at the bottom of the man’s grave. Both objects would have been used to care for the hair on his head and his beard.

Similar combs from the same period carved with Christian motifs are on display at the Louvre, the Egyptian Museum and the Vatican.

The red ceramic bowl, found in the grave of a woman around 30 to 40 years old, comes from a workshop in what is now Tunisia. Such bowls were once widely traded across the Mediterranean, but the one uncovered at Deiningen is the first intact one found north of the Alps.

The bowl is stamped on the base and its rim is etched with rune-like symbols, whose meaning is unclear.

Eggs and a weaving sword, or weaving batten, which probably was used for beating the threads on an upright loom, were also found in the woman’s grave.

A horse was buried in a pit next to the man, and spurs and the remains of a bridle were also found.

The finds show that contact persisted across far-flung former provinces of the Western Roman Empire even after its fall in A.D. 476, archeologists say.

According to the statement, the goods may have ended up in northern Swabia after a ruler had given them as gifts to a valuable vassal.

Other hypotheses said that they were tributes or prizes for the horse rider from a war campaign.