Cast-iron bridge over the Tiber River may have caught fire from a damaged gas pipe underneath it. 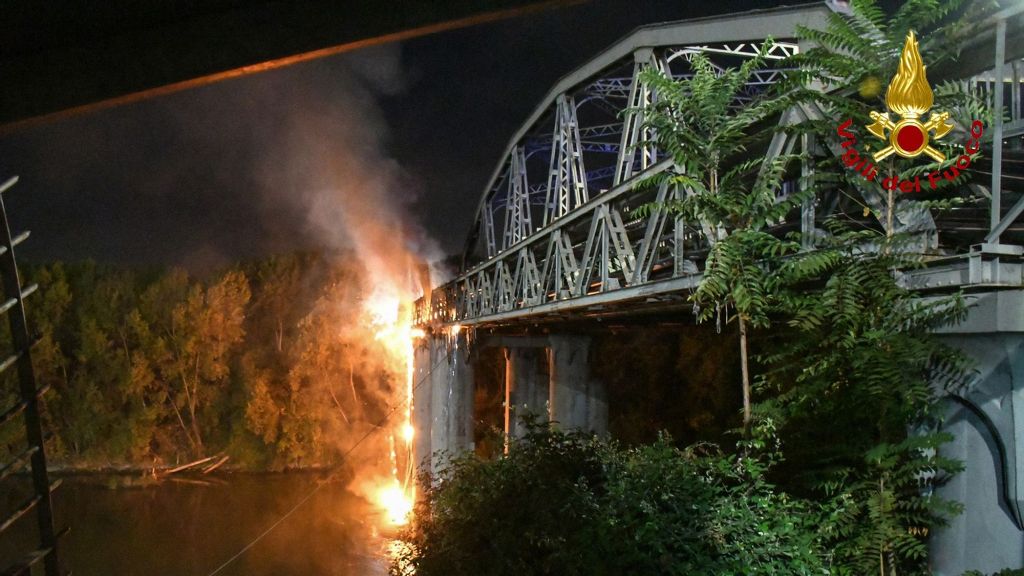 Fire has severely damaged the historic Iron Bridge — also known as the Industry Bridge — in Rome.

Authorities said the large blaze that broke out over the weekend was possibly ignited as a result of a damaged gas pipe under the bridge, which connects the neighborhoods of Ostiense and Portuense.

No injuries were reported in the fire, which was extinguished on Oct. 3. Some sections of nearby neighborhoods were without electricity for several hours, authorities said

The 143-yard-long cast-iron bridge over the Tiber River, which dates to between 1862 and 1863, is an anomaly in a city where most other bridges are built of stone. It was prefabricated in England and erected to connect with what was then the new Rome Termini train station.

The fire, which started shortly before 11 p.m. on Oct. 2, quickly engulfed the metal structure, which has gas and electricity pipes running along its length.

Around 40 firefighters arrived on scene, but they were reportedly delayed by electricity cables that had to be removed before they could begin to fight the blaze. After about 40 minutes, they had the fire under control. While firefighters were still on location, a 23-foot area under the road that was used for gas pipes, cables, partially collapsed, according to the fire department.

Three nightclubs in the vicinity were evacuated and power outages were in Ostiense, Trastevere and Monteverde.

The fire was completely extinguished by 4 a.m. Oct. 3.

The bridge was declared unusable and the transit of boats along the stretch of the river was also prohibited, the emergency services said.

An investigation is underway to determine the cause of the fire.

The fire broke out on the eve of the mayoral election in Rome. One of the key issues in the run-up to the poll was “decay” in some of the city’s infrastructure, services and deportment in general.

The bridge, which was transported in pieces from England and assembled at the location for trains, is made of iron and cast iron arches resting on pylons made of cast iron filled with concrete. The structure was raised in the middle to allow easy access for steamers and military vessels.

In 1911, the bridge was renovated and from then on used by pedestrians and vehicles traveling in both directions.

Last year, the Caprigliola bridge in northern Italy between the Aulla and La Spezia partially collapsed, raising concerns across the country about some of the country’s infrastructure. The bridge was lightly traveled at the time due to the coronavirus pandemic, and only two drivers suffered minor injuries.