VIDEO Cold Comfort: Huge Bear Not So Grizzly As She Settles Down To Sleep Through Winter 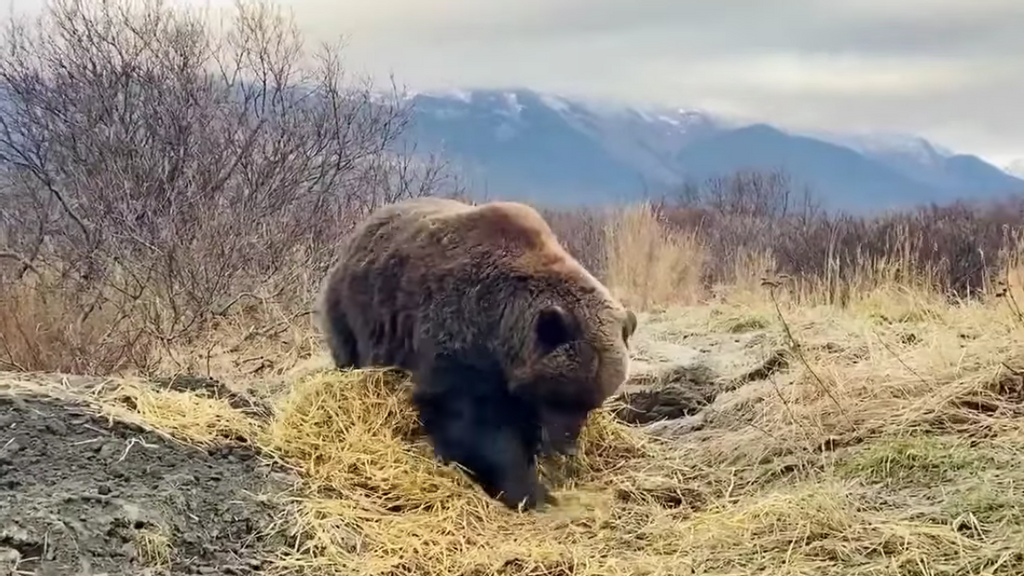 A large female grizzly bear known as Patty is planning ahead.

She is busy building her den as she readies to hibernate during the upcoming Alaskan winter. Her activities were captured on video and shared by the Alaska Wildlife Conservation Center.

“Patty prepares her den!,” the center’s caption for the footage says. “Every year, our bears choose a suitable spot for their den inside their vast AWCC habitat. Most of the time, all three of our brown bears — Patty, JB and Hugo — share their winter bed together.”

Patron — affectionately known as Patty — is a rescue bear. She now lives at the conservation center, about 50 miles from Anchorage.

“We often get asked if our bears dig their own dens,” said center spokesperson Nicole Geilsa. “While our black bears have dens we’ve made for them, our brown bears love to make their own. In the wild, brown bears typically dig new dens every year.”

The bears make their den entrances just large enough for them to squeeze through, so it will cover quickly with insulating snow, Geilsa said. The chamber is dug only slightly larger than the bear’s body to allow for maximum heat retention.

“While asleep in their dens, their heart rate, respiration and body temperature drop, but brain activity continues in bears throughout the winter, and they can be easily woken up,” she said. “Instead of true hibernation, a bear’s winter rest is actually called ‘torpor.’”

The center takes in orphaned and injured animals and provides them with a home for the rest of their lives. Geilsa said the sanctuary maintains over 200 acres of land, so the animals can behave as they would in the wild.

The animal sanctuary explained that Patty, who is JB’s sibling, lost her mother when she was still a cub. A local man shot the mother after she killed a moose calf in his backyard and feared the bear might attack his dog. He did not realize she had two cubs.

When he discovered Patty and JB hiding in a treetop, he called a local wildlife biologist, who retrieve them. The cubs were handed over to the animal sanctuary in 2004.

Grizzly bears usually hibernate for five to seven months every year, starting in October and emerging in March or April with the arrival of spring. (The coldest overnights in the Anchorage area usually occur in January, when the averages low is 9 degrees Fahrenheit.) But with climate change, they are increasingly emerging from their torpor in January and February, which can be problematic, as their food sources are often scarce at that time.

Grizzly bears in the contiguous United States are protected as a threatened species under the Endangered Species Act, with less than 1,500 left in the lower 48 states and about 31,000 in Alaska.