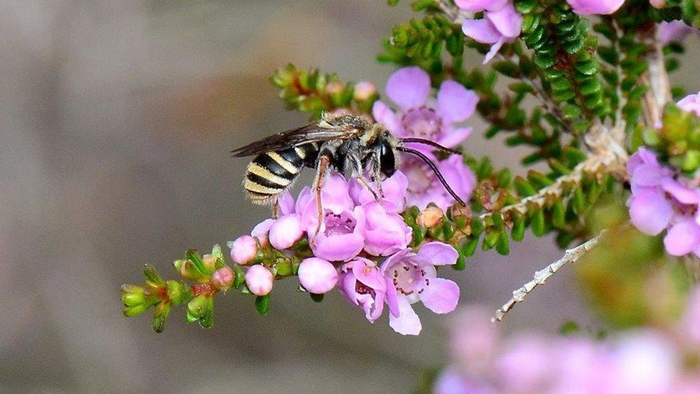 L. gracilipes is one of the species assessed as vulnerable in a report that investigated the damages caused by the 2019-2020 Australian brushfires. (Courtesy of Ken Walker/iNaturalist Australia)

The number of endangered bee species in Australia will likely increase five-fold because of raging brush fires in 2019-2020 that displaced about 3 billion animals and destroyed 3,000 homes, researchers say.

Sixty million acres of Australian land burned in what became known as the Black Summer brushfires, threatening the existence of bees and other insects and invertebrates, according to a study led by researchers at Flinders University in Australia.

“Our research is a call for action, from governments and policymakers, to immediately help these and other native populations most in danger,” said the study’s lead author, James Dorey, a doctoral candidate at the school who is now a researcher at the Yale University Center for Biodiversity and Global Change.

He and other researchers looked at 553 species in trying to assess the long-term environmental damage from the fires. Of the bees studied, nine species were assessed as Vulnerable and two more Endangered as a result of the brushfires.

The researchers are calling for conservation measures to be implemented more rapidly.

“Conserving insects and other less visible taxa should also be a factor in restoring and preserving some of the hundreds of bees that may not yet have been studied or recorded,” Dorey said.

He says he believes his research team’s study published in Global Change Biology can be useful in assessing species elsewhere that may be understudied or not on the Red List of Threatened Species of the International Union for Conservation of Nature.

The study offers a new model for “using the data we already have to understand how natural disasters are likely to impact key species and their ecosystems,” Dorey said. He pointed out that gaps in data should not discourage efforts to protect vulnerable species.

Because native Australian bees are understudied, most people are unaware of how vulnerable they are, said Olivia Davies, also a co-author of the brushfire study. “The fact that no Australian bees are listed by the International Union for Conservation of Nature shows just how neglected these important species are,” she said.