Manager of the ‘Bronze Bomber’ equates his fighter with Mike Tyson, Evander Holyfield and the Klitschko brothers. 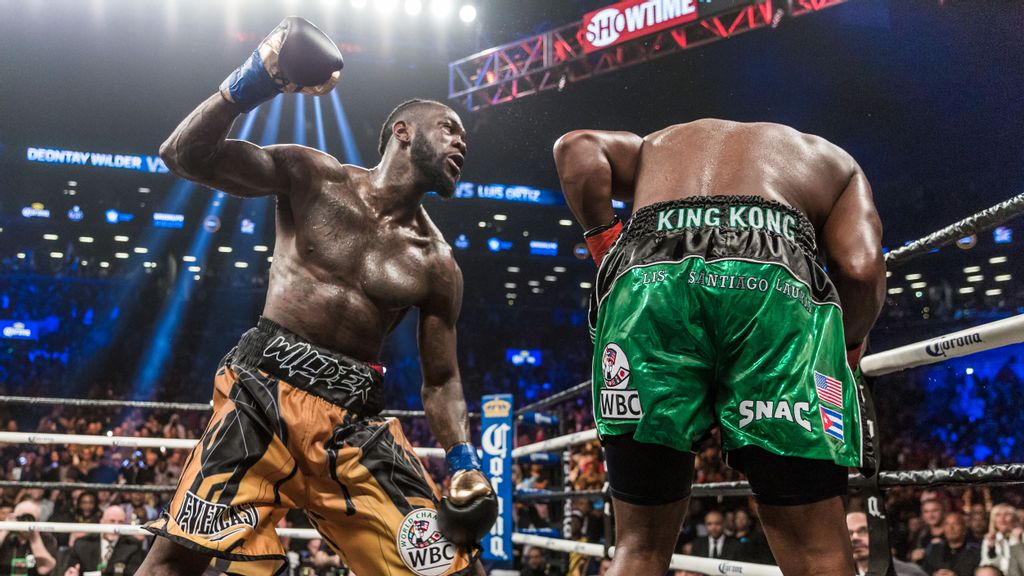 Deontay Wilder (left) retained his WBC heavyweight title against Luis Ortiz with a 10th-round TKO in March 2018. “Deontay had developed the puncher’s curse. ... He singularly depended on his punches,” said Wilder's manager, Shelly Finkel. “Deontay is a much different fighter for his third bout against Tyson Fury on Oct. 9. (Premier Boxing Champions)

Deontay Wilder will stop Tyson Fury in the first half of their third fight on Oct. 9, according to Wilder’s manager, Shelly Finkel.

Wilder will “conclusively” regain his WBC heavyweight title from Fury said Finkel, who considers “The Bronze Bomber” to be “on that level” with four other champions he’s guided — Evander Holyfield, Mike Tyson and the Klitschko brothers, Wladimir and Vitali.

“I believe Deontay is going to knock him out in under six rounds,” said Finkel, 77.  “There won’t be any reason for a fourth fight. I think you’re going to see a very dominant performance from Deontay, and I think he will end the fight conclusively, and then we can move on.”

“In the last fight, Deontay got a little bit arrogant, thought he could just do this or that, and he’s learned from it,” Finkel said. “He’s told me that it may be among the greatest experiences he’s ever had and needed. I think Deontay is going to knock out Tyson Fury within the first six rounds.”

Wilder dropped Fury once each in the ninth and 12th rounds of their first fight, but was floored himself in the third and fifth rounds of his loss to Fury.

“Tyson is working on putting more power in the right hand and actually in both hands,” Fury’s trainer, Javan “Sugar” Hill-Steward, said exclusively to Zenger on Thursday.

“It’s to the point where he’s become a fighter who has one-punch knockout power. The first fight went 12 rounds, and the second fight went seven, so I want to start this fight like it’s round No. 20.”

Finkel said Wilder has learned from mistakes made against Fury as well as in his pair of victories over Cuban southpaw Luis Ortiz, whom he led by one point en route to a two-knockdown, 10th-round TKO in March 2018.

Wilder was losing to Ortiz during his come-from-behind one-knockdown, seventh-round knockout in November 2019.

“Before the loss, he was able to do whatever he wanted to do. In the second Ortiz fight, for example, if he didn’t knock him out, he was losing, big-time. But he knocked him out, and when that happens, you can have the puncher’s curse. You feel like you can always bail it out,” Finkel said.

“In some ways, I feel that Deontay had developed the puncher’s curse in that he singularly depended on his punches. Like Deontay used to say: They need 12 rounds, I need two seconds. So then you start to depend on that, and you start to cut corners. But Deontay has not cut corners this time.”

Wilder’s new trainer, Malik Scott, said “The Bronze Bomber” has improved his “speed, strength and physicality on the inside,” and will stop Fury “inside five rounds,” or “can win a 12-round decision.”

“Deontay is not going to be bullied or pushed around like he was in the last fight,” Finkel said. “I believe that Deontay knows what he’s got to do to control this fight. You’re talking about a fighter who is 6-foot-7, and he’s like a big Tommy Hearns.”

“Deontay is a much different fighter. Much heavier, and he has trained much harder,” Finkel added. “His bench-pressing has improved to around 350 pounds. Deontay is going to surprise people with his physique and how solid he looks. If Deontay can’t beat Tyson Fury this time, then it’s just that he can’t beat Fury.”

Wilder, who bled from his left ear during the rematch, at one point stated that Fury had cheated by adjusting and manipulating his gloves to the point where his fingernails were exposed enough to cut him.

“Everyone knows what it is about the gloves,” Wilder exclusively told Zenger, regarding videos that were circulated on social media and Youtube.com. “We’re going to make sure nothing like that happens in this next fight.”

Said Finkel: “There was doubt about the gloves and [Fury] doing things, but we’ll be more careful than we were before, and I don’t think that will matter in this fight.”

Fury retorted during a virtual press conference on Wednesday in Las Vegas.

“I hope he brings a better fight because [our] last fight was disappointing, to say the least. I trained for an absolute war, and it was a one-sided beatdown, so hopefully he can give me a challenge.”

Twice named Manager Of The Year by The Boxing Writers Association Of America, Finkel said Wilder looks “better than I’ve seen in the 14 years I’ve been associated with him,” comparing him favorably with four-time heavyweight champion Holyfield, 58, former champion Tyson, 55, and the former champion Klitschko siblings, Wladimir, 45, and Vitali, 50, who reigned simultaneously for two years, five months and 13 days between 2008 and 2012.

“Deontay is on that level in terms of size, strength and power, and he’s actually learning more now that he’s lost,” Finkel said. “In the 14 years or so that I’ve been with Deontay Wilder, I’ve never seen him train like this. He’s the best I’ve ever seen him to be, physically and mentally.”