While An Economic Crisis Ravages Lebanon, Expats Organize To Help

The crisis likely ranks in the top 10 most severe episodes globally since the mid-19th century, World Bank says. 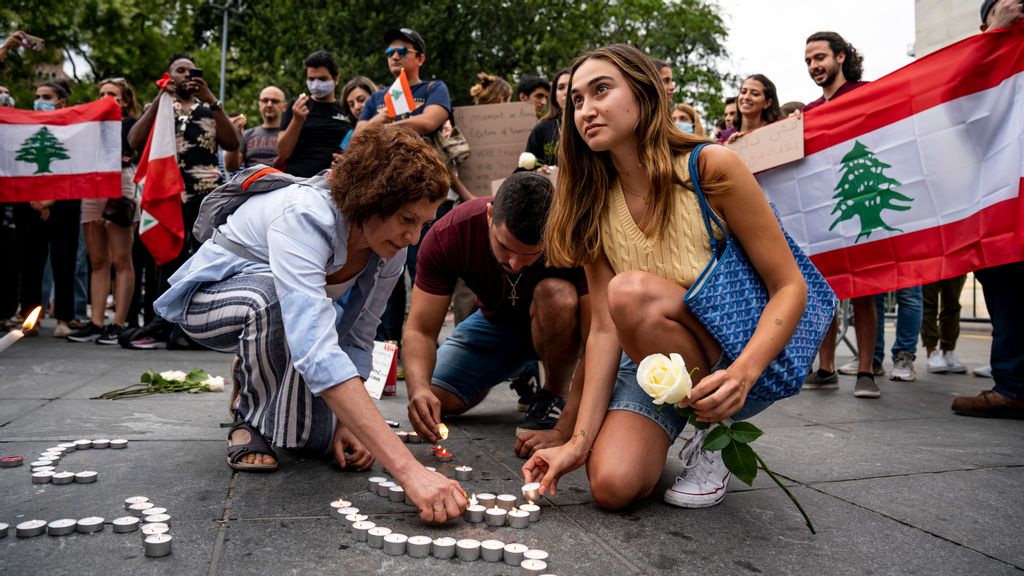 Lebanese Americans attend a memorial for victims of the explosion in 2020 at the Port of Beirut in New York City's Washington Square Park on Aug. 4. (Luigi W. Morris)

“No medicine, no gas, no money,” is the mantra from Lebanese asked to describe their country over the past year.

Lebanese expat Nour Dabboussi, who lives in New York, witnessed the reality when she visited her country in August.

On Aug. 4, 2020, a deadly blast struck the port of Beirut, the capital, destroying the port and damaging a majority of the city. The blast also exacerbated political and economic crises ravaging Lebanon for two years. The country may be experiencing one of the world’s worst economic crises since the mid-1800s, according to the World Bank. The local currency, the lira, has lost about 90 percent of its value, and residents are enduring shortages of essential goods.

“The economic and financial crisis is likely to rank in the top 10, possibly top 3, most severe crises episodes globally since the mid-19th century,” the World Bank said in June 2021. “In the face of colossal challenges, continuous policy inaction and the absence of a fully functioning executive authority threaten already dire socio-economic conditions and a fragile social peace with no clear turning point in the horizon.”

One year after the devastating explosion, the wound is still open.

During an event in New York City’s Washington Square Park in August this year, 300 people gathered to remember the 200 lives lost in the blast, holding Lebanese flags and lighting candles. No matter the distance, they grieved for their country or ancestral home.

Most of the people at the event were not in Beirut on the day of the explosion. Many were not even born in Lebanon, or had left it decades earlier. They identify as members of the diaspora — migrants who fled their home country looking for better opportunities. The Census Bureau estimated in 2015 that 500,000 Lebanese people live in America, making the United States home to the fourth-largest Lebanese population in the world.

In the wake of the worsening situation in Lebanon, many Lebanese Americans felt an increasing need to act.

Hilda Abla, an art teacher who moved to New York in 2013, said she emigrated in hopes of finding a better life but always maintained a connection with her country.

“I’m so proud of being Lebanese,” she said. “It’s heartbreaking to see it like this. When my friends tell me how horrendous the situation is, it makes me cry every time.”

Like Abla, tens of thousands of expats connect in real life and on social media, offering mutual support. Those who travel to Lebanon take medicine and other essential goods with them. They encourage each other to visit the country, to spend their dollars there and keep the economy going. They raise awareness through discussion panels and outreach initiatives.

One of the biggest mutual aid groups is Librantroc, a Facebook page created by Hala Dahrouge in 2019 at the beginning of the economic crisis. The group grew quickly and now counts more than 70,000 members, who offer support, both from within and outside the country.

“When I noticed how unfair the situation was, I had to do something concrete to help. I couldn’t just stand around,” Dahrouge said. The network has helped people all across Lebanon with on-the-ground meal delivery and home renovations, and shipments of medicine.

For those who can’t travel to Lebanon, assisting from the United States is an easy path.

“I feel like with COVID, people got used to this new normal. It’s easy to connect and make an impact without moving from your home,” said Julie Lattouf, a Boston-based financial consultant. Although she was born in the United States, she feels a visceral connection to Lebanon.

Over the years, Lattouf has participated in various initiatives from the U.S. to support her ancestral country. She helped found the nonprofit 100 American Lebanese Who Care, which collects donations and directs them to NGOs in Lebanon. She hopes to also create a platform for members of the Lebanese diaspora to connect and find ways to support their country.

“What’s happening in Lebanon today is terrible,” said Lattouf. “But we have to remember that without the Lebanese diaspora, many would not have survived. It’s our people. It’s our duty and responsibility to give back.”

When Nour Dabboussi traveled to Lebanon in August 2021, she did everything she could to give back: donating food, clothing and money.

“It was beautiful and sad to go back home,” she said. “It didn’t completely feel like home, though it is home.”

«Previous Post
Creating The Crops We Need, Not The Ones We Have»Next Post
Crude Oil Prices Nearing 3-Year High