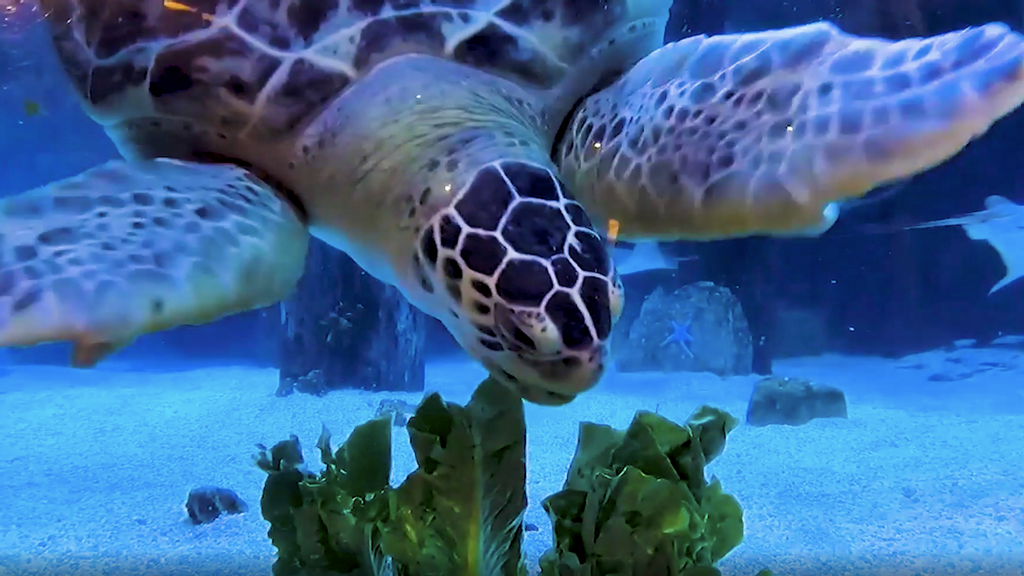 In the underwater equivalent of Door Dash, a green turtle receives a tray of fresh vegetables at an aquarium in Connecticut, where she has been living large since 2008.

Video show Charlotte’s feast at the Mystic Aquarium, sharing her bounty with some fish that share her tank.

“Charlotte has a new salad bar to enjoy and needless to say, it’s a big hit with everyone!” the aquarium said on Facebook, where it posted the video.

The video shows Charlotte, a green sea turtle — also known as a green turtle, black turtle or Pacific green turtle — being given a tray of vegetables by a member of staff.

The turtle is seen diving to reach it and taking a big bite of lettuce. Later in the video, a couple of big fish find their way to the food tray, as well.

The aquarium said Charlotte, who is now between 15 and 20 years old, “was rescued in Cumberland Island, Georgian, in January 2008 by the Georgia Sea Turtle Center after being hit by a boat propeller. The injuries to Charlotte’s shell and hind flippers had healed, but had left paralysis of hind flippers.”

Charlotte was taken to Mystic Aquarium, which she can call home for the rest of her life.

The aquarium said as a result of her partial paralysis, she developed very strong front flippers.

“Charlotte has earned quite a loyal following,” the aquarium said. “There is even a book about her in the Aquarium Gift Store entitled ‘Bubble Butt.’  This condition, as referred to as positive buoyancy, causes the turtle to swim in a head down position. In order to compensate for the change in buoyancy and the inability to fully use the back flippers, Charlotte has developed large muscles in the front flippers.”

The aquarium said it is planning to give Charlotte a harness so she can train during special exercise sessions to swim properly again.

Green sea turtles are listed as “endangered” on the International Union for the Conservation of Nature’s Red List of Threatened Species.

“Like most sea turtles, green turtles are highly migratory and use a wide range of broadly separated localities and habitats during their lifetimes,” according to the Red List of Threatened Species. “Upon leaving the nesting beach, it has been hypothesized that hatchlings begin an oceanic phase, perhaps floating passively in major current systems that serve as open-ocean developmental grounds.

“After a number of years in the oceanic zone, these turtles recruit to neritic [shallow marine] developmental areas rich in seagrass and/or marine algae where they forage and grow until maturity.”

The main threats to their existence are human activity, including hunting and poaching, as well as a harvesting. Conservationists have warned that green sea turtles regularly fall victim to bycatch by fishermen.