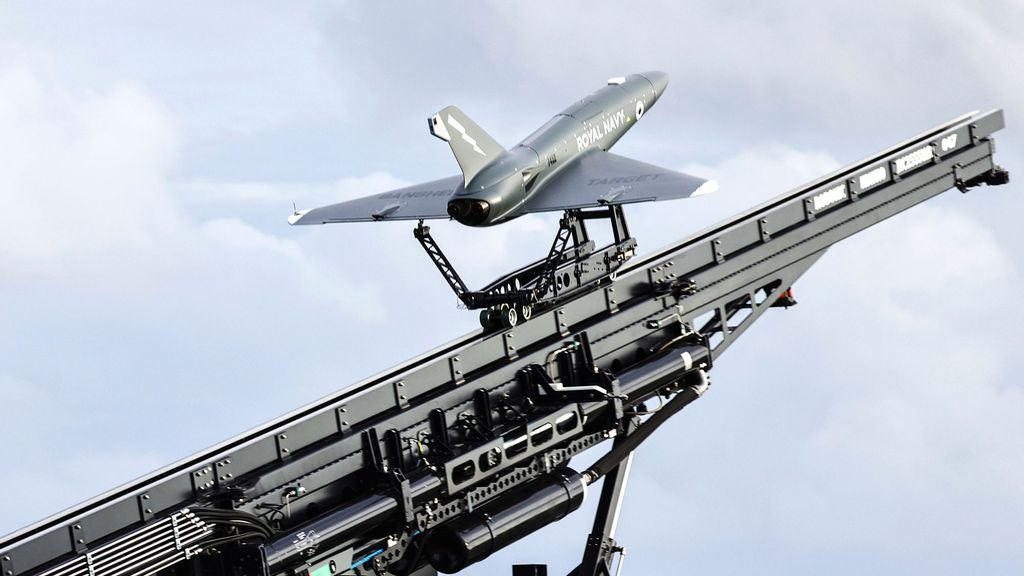 A Banshee target drone being launched from the deck of the HMS Prince of Wales aircraft carrier. (Royal Navy/Zenger)

A fixed-wing target drone that resembles a miniature fighter jet successfully completed its first test by the U.K. Royal Navy.

The QinetiQ Banshee Jet 80+ was launched from the deck of the HMS Prince of Wales on Sept. 29.

The Navy hopes the drone will have a role in future training exercises in which crews practice defending against increasingly advanced jets and missiles.

“There is a real need for a low-cost drone such as the Banshee that can replicate a range of the threats in the skies and provide a testbed for future payloads,” Cmdr. Rob Taylor, lead for the Royal Navy air test and evaluation group said. “The key to this is that a warship can carry this drone with it on operations, launch it and use it to keep personnel razor-sharp in countering threats from above.”

Video from the Royal Navy shows the Banshee launching from the aircraft carrier deck and then soaring high above the sea during its test flight. After the video ends, the drone landed in the water via parachute and was recovered by the ship’s crew. In the future, the Navy hopes to develop drones that can return and safely land on the deck.

The jet-powered drone can reach an altitude of 25,000 feet and fly at speeds in excess of 460 mph. QinetiQ’s, the website of its builder, says the Banshee is powered by twin 99-pound thrust gas turbine engines.

The test launch, Taylor said, is the first step in figuring out how the navy will use drones like the Banshee in the future.

That effort will include looking at “rotary-wing and fixed-wing drones to fulfill a number of tasks to increase mass on the carriers and allow crewed aircraft to maximize their capacity,” he said. “The Banshee demonstration is just the start of the un-crewed autonomous systems program of work for the Royal Navy.”

The HMS Prince of Wales that served as the base for the drone test is the Royal Navy’s newest aircraft carrier, with a flight deck 230 feet wide and 920 feet long — the equivalent of three soccer fields, the navy says.