A giant bison skins a tree as he gives himself a head rub on the bark. 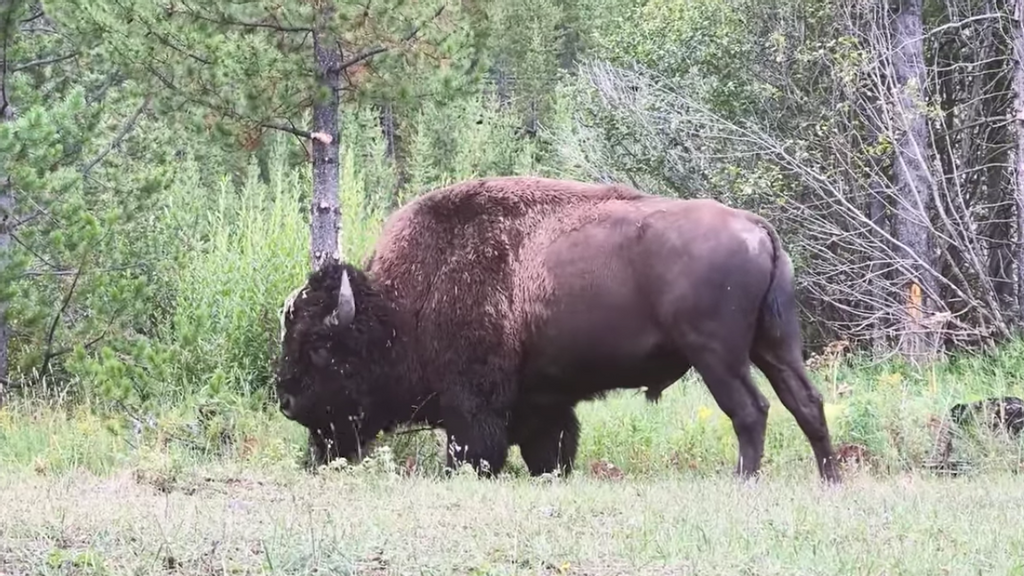 Yellowstone is the only place in the United States where bison have lived continuously since prehistoric times. (Yellowstone National Park/Zenger)

If trees could run, they would flee at the sight of bison.

Video from Yellowstone National Park shows what happens when a bison rubs its head against a tree: It strips the bark away.

Yellowstone, which covers parts of Wyoming, Idaho and Montana, is the only place in the United States where bison have lived continuously since prehistoric times.

The largest land-dwelling mammal in North America, bison males can weigh 2,000 pounds and females can weigh 1,100 pounds. The video shows this massive animal intensely butting its head as the conifer sways and at one point appears close to breaking.

The video then cuts to a close-up shot of the tree, showing one side of it stripped clean of its bark. Shared online by the Yellowstone National Park, the caption reads: “Tracks and scat aren’t the only signs of wildlife you can find in the park. Bison, bears, cougars, and other wildlife rub trees for a variety of reasons — like marking territory or removing insects and old fur. Have you come across a rub tree before?”

The park said it is not uncommon to see birds, such as magpies, perched on a bison to feed off the insects on its coat.

Within Yellowstone, bison tend to move from valley to valley following the grasslands and meadows, which is their source of food.

Yellowstone National Park says it is home to the “most important bison herd in the United States.” The animal was nearly extinct before the U.S. Army, which administered Yellowstone at the beginning of the 20th century, protected it from further poaching, according to the National Park Service.

Bison are social animals that often form herds, usually directed by older females. Group sizes average about 20 bison during winter, with a maximum of about 1,000 during the breeding season, known as the rut, in July and August, said the park service. Calves are usually born from late March through man and are orange-red in color.

There are an estimated 500,000 bison living across North America, on tribal, state and federal lands, as well as privately owned herds, according to figures compiled by the U.S. Department of Agriculture 2017 census and the Department of the Interior.

American bison once roamed the length of North America in vast herds before they were killed en masse by immigrants from Europe. Contrary to the European settlers, Native Americans never attempted to domesticate the animals, instead leaving them to live wild and free.