Bears consume lots of salmon, as it’s rich in the nutrients they need to sustain themselves. 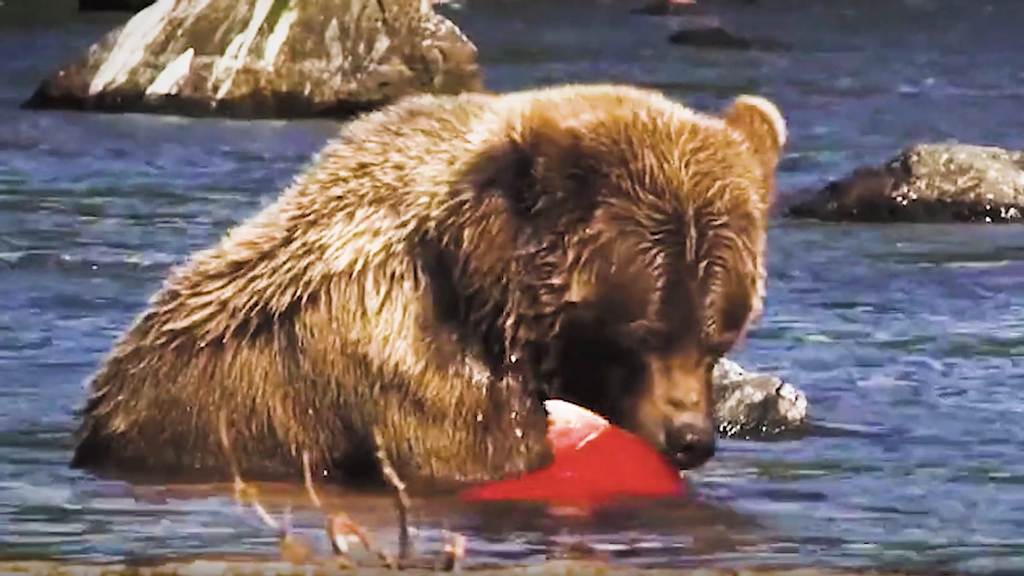 The bears are prepping for winter.

In Alaska, video shows a brown bear eats salmon as it begins to pack on the pounds before the cold arrives, and it goes into hibernation.

Bears may lose up to one-third of their body weight during the season, as they rely solely on their fat reserves. Survival depends on eating a year’s worth of food in six months, according to the National Park Service.

In the video, a large brown bear sits in a river hunting for food as birds perch on rocks in the background.

Suddenly, the animal slips something bright and pink into its mouth and a salmon emerges from the water clasped in its hairy paws.

Bears prefer to eat salmon’s organs, including its liver, rather than the flesh, because it is richer in the essential nutrients it needs.

The U.S. Forest Service for the Alaska region shared the footage, with the caption: “Eat, eat, eat, then sleep, sleep, sleep. How do you prepare for winter? Actual footage showing how coastal bears pack on the pounds for winter hibernation. Eating as much salmon and other nutrient rich foods as possible. #FatBearWeek.”

“Fat Bear Week — an annual celebration of success. All bears are winners, but only one true champion will emerge,” according to the National Park Service.

“Held over the course of seven days and concluding on the Fat Bear Tuesday, people chose which bear to crown in this March-Madness style bracket, where bears are pitted against each other for your vote,” it posted on its website.

The National Park Service said: “From its humble beginnings of Fat Bear Tuesday in 2014 to over 640,000 votes cast last year in 2020, celebrating fat bears and Katmai’s healthy ecosystem has since become a tradition. For bears, fat equals survival. Each winter, bears enter the den where they will not eat or drink until they emerge in spring.”

At Katmai, bears are drawn to the salmon, readily available from roughly late June through September. Salmon are the lifeblood of the area, supporting Katmai’s people, and other animals.

“Fat bears exemplify the richness of this area, a wild region that is home to more brown bears than people and the largest, healthiest runs of sockeye salmon left on the planet,” the National Park Service said.

In winter, their body temperature, heart rate and breathing drop. Brown bears, which are also known as grizzlies in North America, typically spend winter hibernating in dens they dig on the ground, given the season’s scarcity of food.

The animals eat as much as possible to survive the cold. Temperatures can drop dramatically, ranging from minus 0 degrees to minus 30 degrees Fahrenheit.

When the temperature rises in spring and there is more food to consume, the bears reappear.