Trump Looks To Midterm Primaries To Cement His Hold On GOP

The former president is working to stack GOP ballots with loyalists. His record with primary endorsements is 31-0 since last year. 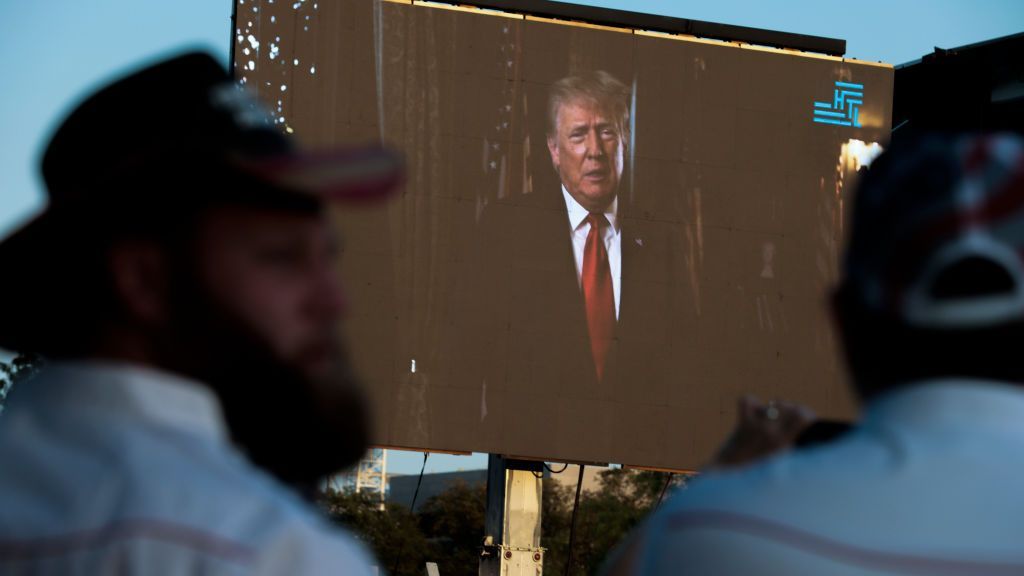 Former U.S. President Donald J. Trump appears on screen during a Let Us Worship prayer service on the National Mall in Washington, D.C. for the 20th anniversary of the 9/11 attacks on Sept. 11, 2021. (Anna Moneymaker/Getty Images)

With the 2022 midterm elections a little over a year away, former President Donald J. Trump is handing out a slew of primary endorsements to help Republicans win control of Congress and complete his takeover of the party.

Rather than waiting until party nominees are selected, Trump has endorsed a spate of House and Senate candidates, including some challengers to GOP incumbents.

While the former president has demonstrated a track record of assisting candidates to victory by throwing his support behind them, his party runs the risk of filling out their congressional caucus with controversial figures — or losing some races to Democrats.

“The Republican Party is now the Trump party,” John Pitney, Jr., professor of American politics at Claremont McKenna College in California, told Zenger. “There are some places where his influence is less intense than others, but it reaches everywhere, like smog.”

Nearly 10 months after leaving office, Trump remains a valuable GOP player and has made few efforts to quell rumors he is considering another White House bid in 2024. He has also promised Republican leaders like ally and House Minority Leader Kevin McCarthy (R-Calif.) that he will help the party take back power in both chambers of Congress. In turn, GOP midterm candidates across the country are vying for his support.

“Trump’s endorsement of primary challengers for seats in the 2022 midterm elections is a strategy with two goals: to secure Republican majorities in the House and Senate and demonstrate his hold on the party in preparation for a presidential run in 2024, and to retaliate against members who voted for the second impeachment,” said Thomas Sutton, a political science professor at Baldwin Wallace University in Ohio.

Of the 17 Republicans who supported Trump’s second impeachment for “incitement of insurrection” on Jan. 6 at the Capitol, 11 are up for reelection next year. Most are facing primary opponents.

Trump so far has endorsed several of those challengers, including Harriet Hageman, a former Republican National Committee member running against Rep. Liz Cheney (R-Wyoming); Joe Kent, a veteran running against Rep. Jaime Herrera Beutler (R-Wash.); and Kelly Tshibaka, an attorney and Alaska politicianrunning against Sen. Lisa Murkowski, (R-Alaska), among others.

“Trump’s campaigning efforts and endorsements at this point in the electoral season are certainly an effort to change the Republican Party,” said Daniel R. Birdsong, senior lecturer at the University of Dayton’s political science department.

“This is similar to the efforts of the Tea Party in 2010. Both are efforts to win at the primary level. The 2021-2022 effort is less related to issues and more about supporting Trump.

Though Birdson said “Trump’s Republican Party of 2020 did not have a party platform,” the party adopted the same platform it had used in 2016.

“At the end of the election, Trump’s efforts could backfire,” Birdsong said, likening a potential outcome to what happened a decade ago. “In 2010, some Tea Party candidates were viewed as too extreme and ended up losing races that were winnable.”

“GOP voters did not want someone who could actually win, much less govern effectively,” he said. “They just wanted somebody who could air their grievances. For them, politics is just Festivus by other means. ”

The threat of a Trumpian figure taking over the governor’s mansion ultimately mobilized California’s large population of Democratic voters to keep Newsom in office, and the recall vote failed. But Trump’s endorsement track record shows that his support carries a lot of weight with Republican voters in other parts of the country.

Of the 122 candidates he endorsed in the 2020 congressional primaries, 120 were elected. Trump-endorsed candidates in the 2020 Senate primaries were 21-0, and all 10 GOP candidates who have received his support so far in 2021 have been victorious.

“In truly competitive districts, extremist candidates will lose to moderate candidates,” said John Wilkerson, director of the University of Washington’s Center for American Politics. “But in safe, one-party districts, the candidate who represents the party will win. So Trump-backed candidates who win Republican primaries should win a lot of general elections.

“If this happens, it should strengthen Trump’s prospects in 2024.”

Reinforcing Trump’s command of the party, a Harvard/Harris poll released last week showed that 58 percent of registered Republicans would support Trump in a 2024 presidential primary, followed by Mike Pence at 32 percent.

“Trump has maintained support of the largest constituency in the GOP,” Sutton said. “What is left of mainline conservative leadership is weak and fractured, unable to build a united front to effectively challenge the former president in his efforts to expand his influence in the GOP and eventually be the standard-bearer in 2024.”

By the end of the 2022 midterms, it’s possible that the old-school Republicans of the George W. Bush era who handed the late Sen. John McCain and Sen. Mitt Romney their GOP presidential nominations in 2008 and 2012, respectively, may no longer hold sway.

Controversial Rep. Marjorie Taylor Green (R-Ga.), a former conspiracy theorist who received praise from Trump on the campaign trail in 2020, could see her ranks expand. However, she too will face at least two challengers in the upcoming midterms. Meanwhile, more traditional conservative lawmakers may find themselves squeezed out of leadership positions.

Cheney, for instance, was ousted as the party’s third-most senior House member in May following GOP criticism over her vote to impeach Trump and her dismissal of his election fraud claims.

She was replaced by Rep. Elise Stefanik (R-N.Y.), despite the congresswoman’s voting record being ideologically farther from Trump’s than Cheney’s. Stefanik, who had voted with Trump 77 percent of the time compared to Cheney’s 93 percent, quickly earned praise from Trump and his supporters for remaining loyal to him.

It’s unclear whether other Republican Party stalwarts may face fates similar to Cheney’s.

Senate Minority Leader Mitch McConnell (R-Ky.) fell out of Trump’s good graces this year for admonishing the former president’s rhetoric leading up to the Capitol siege. But given McConnell’s ability to accomplish items on the GOP’s congressional agenda, such as confirming a record number of conservative judges during the Trump administration, he may be safe.

“Mitch McConnell will probably retain his leadership position because his members think he is effective,” Pitney said. “But like all Republicans, he has to genuflect when Trump takes a firm position. As Edmund Burke wrote, such leaders are ‘the expert instruments of absurd projects.’”

While the former president’s unfiltered remarks helped in large part to propel him into the Oval Office, the addition of similar Republican members to Congress could place the party in a “political pickle” in the long run, Birdsong said.

“They want to win back the House and Senate, but they could end up with members of the Republican conference that are more self-interested than interested in the Republicans’ congressional agenda,” he said. “This will make governing much more difficult.

“GOP leaders in Congress must take these challenges seriously,” he said. “The devil you know beats the devil you don’t.”