Three school board seats and a $1.1 billion budget could be up for grabs if the recall vote succeeds. 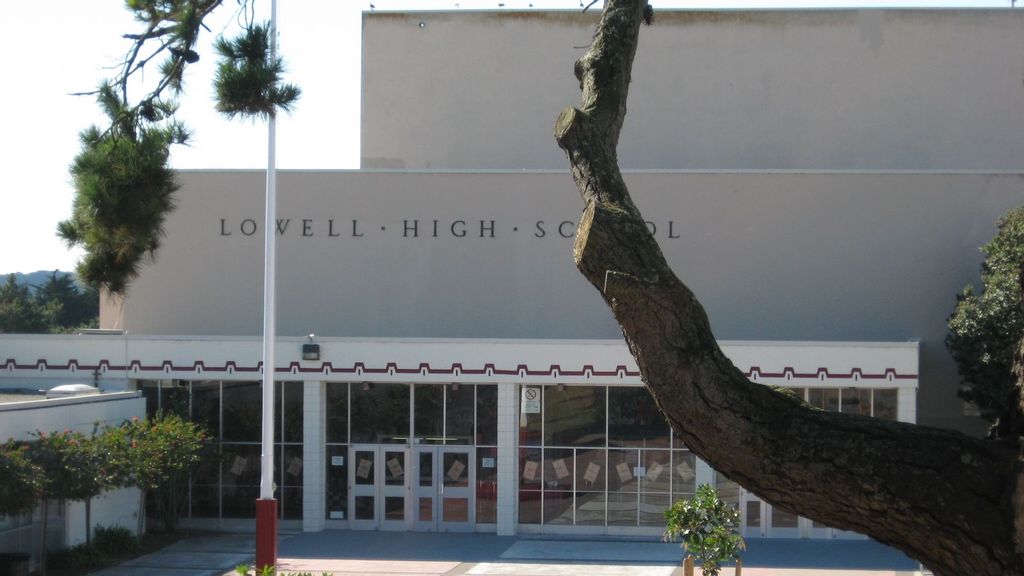 Lowell High School in San Francisco, Calif. is an elite public school that has served for decades as a magnet for high-achieving eighth-graders across the city’s demographic groups and neighborhoods. School board members have scrapped its competitive entrance exam in favor of a random lottery. (Wikimedia Commons)

Jason Kruta surrendered to law enforcement after a warrant was issued for his arrest for allegedly interfering with the collection of petitions to recall members of San Francisco’s school board. He paid a bond of $10,000 and is awaiting trial, according to the San Francisco Sheriff’s Office.

Kruta was caught on video attempting to steal signed petitions from a parent volunteering for Recall SF School Board, which is a misdemeanor violation of California Election Code 18631. The charge would become a felony if Kruta signed a fake name on the petition, which has not yet been confirmed.

Kruta is suspected of attempting to interfere with a recall effort against three members of the San Francisco School Board. The battle has it all: dubious old tweets, competing claims of racism and overly woke governance, multimillion-dollar lawsuit threats — and, in a uniquely bayside twist, an effort to cancel U.S. Sen. Dianne Feinstein (D-Calif.) for once defending a Confederate flag.

Kruta, a Columbia graduate, was fired from his job as a Data Coordinator at the Jewish Vocational Services in June after the video became widely distributed.

The incident occurred at a farmer’s market on May 30. Recall campaign volunteer Man Kit Lam said that after a man asked to sign a petition, the clipboard full of signatures went missing. He then caught the man tossing it under a car, he said; after retrieving it and realizing that the sheets full of signatures weren’t attached to the clipboard, he then watched the thief pull papers out of his pants. The man fled from the scene as Lam called after him. “Why?” Lam can be heard in the video. “I’m fighting for my kid’s life.”

“He denied it all the way and then once he got caught, he gave it back to me as if nothing happened,” Lam told Zenger. He added that he wished the police had caught him at the scene.

The case was transferred from San Francisco District Attorney Chesa Boudin to state Attorney General Rob Bonta at the request of Lam, for fear of a conflict of interest. Boudin and Kruta have previously been involved in the same political organizations, including SF Berniecrats and SF Democratic Socialists of America.

Recall organizers say they met their Sept. 7 deadline to qualify for the ballot, with 81,000 signatures. Only 51,325 valid signatures are needed, but it’s typical for some to be disqualified. A recent poll conducted by EMC Research showed the school board’s approval among parents is as low as 10 percent. The San Francisco Elections Department now has 30 days to verify the signature count. If it clears the legal hurdle, a recall election must be scheduled within 100 days.

The stakes: three seats on the seven-member board that governs the San Francisco Unified School District, its 55,000 students and an annual budget of $1.1 billion. All three of the board’s members eligible for recall — Alison Collins, Gabriela Lopez, and Faauuga Moliga — were elected in Nov. 2018 and then reelected last year, just before the pandemic scrambled school politics across the nation.

Recall proponents claim the trio have prioritized culture wars over re-opening and running schools, while their defenders say they simply represent the city’s progressive values.

At the battle’s heart stands the elite Lowell High School and its new admissions lottery. Founded in 1856, the public school with some 2,500 pupils had for 55 years operated as a selective magnet school, drawing high-achieving students from across the city.

Some parents are furious at a decision this year to scrap competitive exams some of the city’s eighth-graders have traditionally taken to qualify for a coveted spot at an elite public school — one that rejects more than half of applicants. Instead of gauging merit with tests and other metrics, the school board’s new system is a random lottery.

“All but two of the current school board members are hostile toward Lowell and its longstanding merit-based admissions policy,” Alisa Farenzena, a Lowell alumnus and a founding member of the Friends of Lowell Foundation, told Zenger.

“For them, it’s easier to bring down the school that’s succeeding because it shines a light on the fact that there can be a successful public school, rather than do the work to academically prepare all children across the district.”

Funded by the city, managed by the school board and charging no tuition, Lowell ranks in the top one percent of California public high schools, with its admissions determined by standardized tests, middle-school grade point averages and writing samples. Successful applicants typically achieve straight As in middle school and rank above the 90th percentile in California’s standardized exams. Notable alumni include U.S. Supreme Court Justice Stephen Breyer and the famed primatologist Dian Fossey.

For some, Lowell long represented a “merit-based” path out of the city’s lower-income neighborhoods, offering a publicly funded opportunity to study a demanding curriculum that prepares students for high-ranking colleges. Others say Lowell failed to diversify its student body to match the city’s population.

Fully 82 percent of Lowell’s study body comes from a minority background and 35 percent are economically disadvantaged, according to U.S. News & World Report. But the school has a lower percentage of black and Hispanic students than the city as a whole. While San Francisco’s population is about 40 percent white, 36 percent Asian, 15 percent Hispanic and 6 percent black, according to the U.S. Census Bureau, Lowell has its own unique racial mix: 59 percent Asian, 18 percent white, 10 percent Hispanic and 2 percent black.

That concerned some San Franciscans, including school board members.

In the middle of the pandemic last year, the board temporarily suspended Lowell’s admissions policy in favor of a lottery awarding places in the student body by chance. That decision was made permanent in February by a 5–2 vote, with Collins — one of the board members potentially facing a recall — describing the old admissions policy as “racist.”

Outraged parents launched a recall effort. Farenzena and other members of an ad hoc “Friends of Lowell” group say a lottery-based entrance model will destroy what makes the school unique.

“We want to develop or support programs that mentor children in low-income elementary and middle schools to make sure they have the skills to get into schools like Lowell and succeed there,” Farenzena said. “These children are being ignored by our school board because the so-called adults are playing politics instead.”

The local teacher’s union says Collins, Lopez and Moliga deserve to serve out their terms.

“We are not able to see where this recall would benefit the community,” said United Educators of San Francisco President Cassondra Curiel. “They are very progressive. They are representatives of communities that have been historically marginalized.”

The union president hinted that the recall may have a racial motivation.

“Why is it always our colleagues of color that have to bear the burden of someone else’s unhappiness? I think that it’s not a coincidence,” said Curiel.

The Lowell debate is not the only issue that has plagued the school board.

When the pandemic shuttered schools in March 2020, the board was given 10 months to formulate a plan to reopen and unlock $12 million in additional state funding. But board members voted three months later against hiring “reopening consultants,” saying some had worked for charter schools, which operate independently of the teacher’s union.

Community groups worked with families and some district officials to create “learning hubs” in Sept. 2020, which offered distance learning for students in smaller groups. Advocates say the hubs helped children regain a sense of normalcy while district schools remained closed. The school board praised the effort but announced that district campuses would not physically host the hubs.

As the 10-month deadline approached with no reopening plan in sight, the number of parents critical of the board grew. Their anger came to a head when, in the weeks leading up to the funding deadline, the board voted 6–1 to rename 44 schools.

Among them are George Washington High School, because the first president owned slaves; Abraham Lincoln High School, due to his treatment of Native Americans; and Dianne Feinstein Elementary School, over accusations the senator replaced a torn-down Confederate flag while she was San Francisco’s mayor during the 1980s.

The board reviewed a Google document with Wikipedia-cited research done by a volunteer committee to determine which names to change. A grade school named after Paul Revere was slated for a name change when a volunteer said Revere’s role in the Penobscot Expedition was to take lands from the Penobscot tribe. The board failed to observe that it was a naval expedition in the Revolutionary War, not an attack on natives.

Lopez, the board’s president and a recall target, celebrated the move to “dismantle symbols of racism and white supremacist culture,” but the decision was later “paused” — to be reconsidered when the schools reopened. San Francisco Mayor London Breed said shortly after the decision that it indicated a twisted sense of priorities in the middle of a global health crisis.

“To hear that the district is focusing energy and resources on renaming schools — schools that they haven’t even opened — is offensive,” said Breed.

The Feb. 2021 deadline for the reopening plan eventually came and went, along with the conditional $12 million in state funding, much to the chagrin of some parents.

City Attorney Dennis Herrera filed a first-of-its-kind lawsuit against the board and the school district, with Breed’s backing, for violating a state law that requires the board to offer in-classroom instruction whenever possible. The motion at the San Francisco Superior Court included testimony from city hospital workers about mental health issues associated with extended distance learning, including record high rates of child suicides.

During one meeting, board members discussed for two hours the appointment of Seth Brenzel to the Parent Advisory Council, a volunteer group with eight vacancies. They denied Brenzel, a white gay man, the volunteer slot because he would not contribute to racial diversity. Brenzel would have been the council’s only LGBTQ member and its only man.

Alison Collins, a black school board member who could face a recall, came under fire when a series of 2016 tweets surfaced in which she accused Asian-Americans of using “white supremacy to assimilate and ‘get ahead.’” She said in her apology that the tweets were “taken out of context,” but the entire board removed her form its vice-presidency in a 5–2 vote following community outrage during a public meeting held via videoconference.

Collins then announced that she would sue the cash-strapped school district for $87 million to cover “harm to self image,” “injury to career” and “spiritual injury to her soul.” A federal judge dismissed the case, finding that her claims were without merit.

Siva Raj and Autumn Looijen, who started the Recall SF School Board campaign, say they just want the school board to prioritize running the city’s public schools. “It seemed very clear that the school board had no desire to reopen and were in fact rejecting parent input,” Raj told Zenger. “The reopening was consistently the last point of these seven-hour-long meetings. Their actions and priorities were totally disconnected with what parents and communities wanted.”

Looijen, co-chair of the petition campaign, told Zenger she’s focused on the school board, not the criminal probe, and planned to get the recall on California’s ballots — “or die trying.”