Students in rural areas can provide their schools with power and Internet connection using the invention by Moisés Venegas. 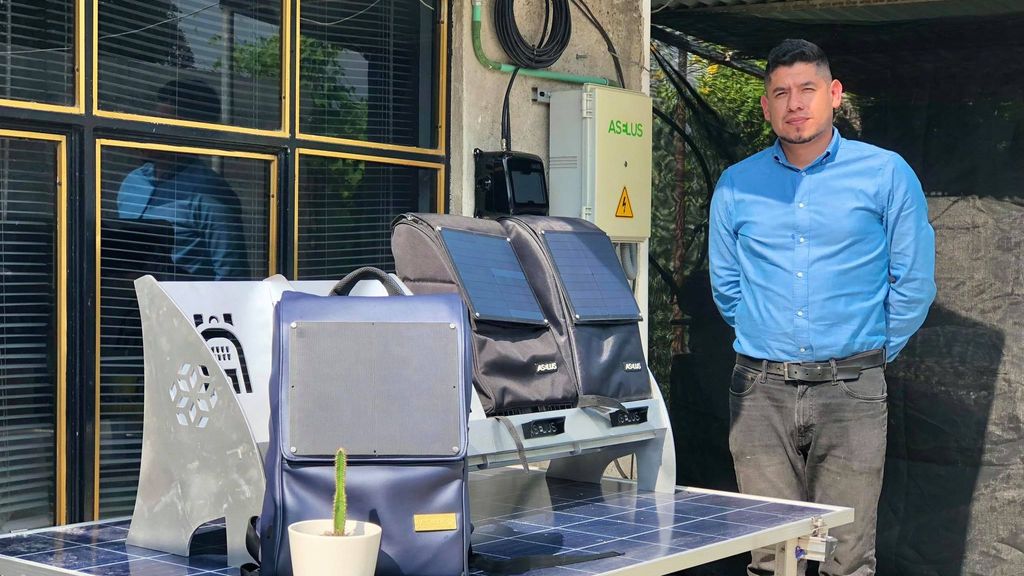 The plant, ubiquitous in the country, is part of Mexico’s coat of arms — as well as the main ingredient in several dishes since pre-Hispanic times. Now, it has a new environmental and social use.

Aselus, a Mexican tech company, has launched a solar backpack made from prickly pear skin. It provides power to students in rural areas where there is no electricity.

Moisés Venegas, an agricultural and mechanical engineer with a degree from the Autonomous University of Chapingo in the State of Mexico, is Aselus’ creator.

Venegas believes that natural materials can replace recycled PET (polyethylene terephthalate) and provide an eco-friendly option for many products.

“We have always been concerned with integrating sustainability and technology in the Mexican style. This backpack combines them all,” Venegas told Zenger. “We developed our own model.

“The backpack has a built-in premium solar panel with a seven-year lifespan and a two-year warranty. It has an energy efficiency rating of 20 percent, and it’s very light,” he said.

The energy-efficiency rating measures how much of the energy hitting the panel will turn into actual power. Solar panels usually have average ratings ranging from 15 to 18 percent.

Venegas says the 10-watt solar panel built into his backpack allows users to fully charge a cell phone or tablet in an hour or two. In addition, it is waterproof and suitable for heavy duty.

“Using clean energy, one contributes to the planet. It seems like an excellent option. I actually charge cell phones and speakers here. It has the advantage that you can move it around. You don’t need to be in an office or where there is power to charge your devices,” Anabel Romo, a user of the product, told Zenger.

Aselus offers three versions of the solar backpack. The first is made of nylon and costs $150, while the price of the prickly-pear-skin backpack is $400. Both include a power bank.

“With the nylon version, we seek to make the consumer understand it is important to have energy at all times. Later, we want to make people recognize the need to use more sustainable materials,” said Venegas.

Aselus will donate the third version of the solar backpack to students from communities with energy lags. Putting together four backpacks, students can provide power and an Internet connection to a classroom.

“The more children [in the classroom], the more energy we are going to have,” he said.

In addition to the backpack, Aselus has a terminal and a modem. Called Adara, the modem helps regulate the power and Internet connection at a school. A sad or happy emoji on the modem screen will show if solar backpacks are in the classroom.

“We intend that students realize, via technology, the education of others depends on them. You hold them accountable. When many children do not come, [the emoji on the modem] gets sad, and the terminal does not load,” Venegas said.

For every 20 backpacks sold — regardless of the model — Venegas donates one to students. He hopes his project helps the Mexican authorities solve the educational gap that faces communities with fewer resources.

“It is important to make alliances. We are trying to solve the [same] problem; we are offering a solution. Many times, students do not have power and other basic needs. We believe if they can study, it allows the country to develop,” he said. Once these children finish their education, they will be able “to look after their own community.”

With this type of project, Aselus, founded in 2016, seeks to remain in the market.

“There are currently many startups, which almost always die in the early stages, due to lack of support. The beginning is hard. It is important not to give up. We have faith in this project,” Rocío Lizbeth López, an Aselus member, told Zenger. “We are giving energy and time, hoping that everything will turn out well.”

Translated and edited by Gabriela Olmos. Edited by Melanie Slone and Fern Siegel.