The Red Planet’s huge canals and valleys were created when massive crater lakes overflowed their banks. 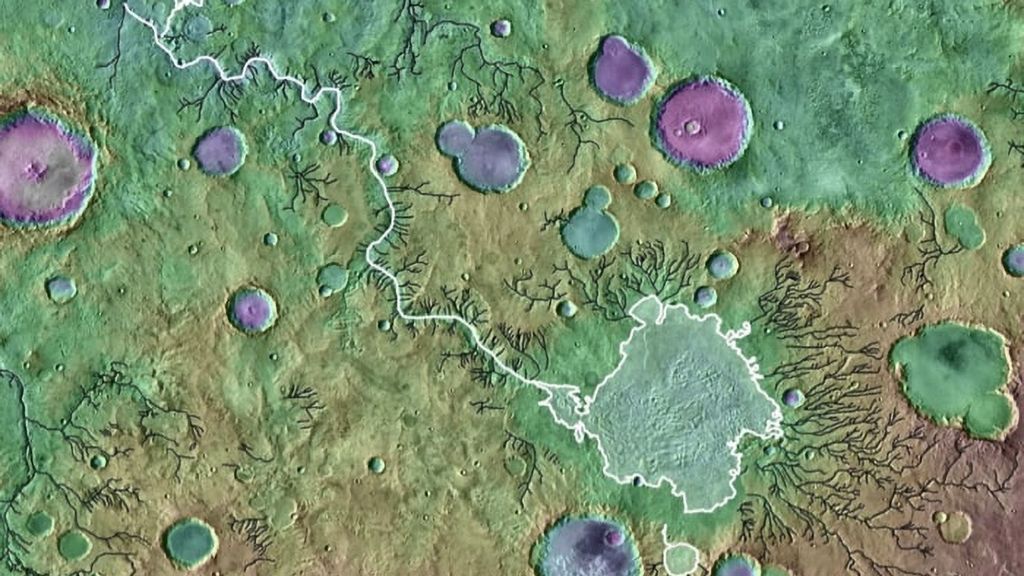 A breached crater lake and outlet valley seen on the surface of Mars are outlined in white. (NASA/GSFC/ JPL ASU/Zenger)

Massive floods overflowing crater lakes cracked through rock and shifted sediment to form many of the deep chasms found on the surface of Mars, scientists say. The scientists behind the new study said their findings offer an alternative explanation as to how the Martian river valley topography developed, which has traditionally been attributed to the climate.

Crater lakes were common on Mars billions of years ago, when the Red Planet had liquid water on its surface. The floods of such bodies often lasted weeks, gushing out enough water to fill Lake Superior, which holds 10 percent of the Earth’s freshwater, and Lake Ontario, another one of the world’s biggest lakes.

“If we think about how sediment was being moved across the landscape on ancient Mars, lake breach floods were a really important process globally,” said Tim Goudge, the lead author of a study that examined how flooding altered the Martian surface.

The findings were a bit “surprising” as floods had been regarded as one-off occurrences for so long, said Goudge, associate professor at the University of Texas’ Jackson School of Geosciences.

The study, which investigated the effects of 262 incidents in which Martian lakes burst their banks, was published Sept. 29 in the journal Nature.

Satellite images of the Mars surface allowed scientists to study the remains of breached Martian crater lakes. The scientists analyzed the depth, length and volume of various valleys, finding that a disproportionate volume was formed by crater lake breaches.

“When you fill [the craters] with water, it’s a lot of stored energy there to be released,” Goudge said. “It makes sense that Mars might tip, in this case, toward being shaped by catastrophism more than the Earth.”

The reason the valleys formed by the floods make up so much volume and so little length is that they are extremely deep compared to those that formed gradually, said study co-author Alexander Morgan.

Although the chasms developed in a geologic instant, experts believe they could have had a long-term impact on the Mars’ landscape.

The breaches scoured very deep canyons, which could have influenced the formation of other nearby river valleys. “We conclude that lake breach floods were a major geomorphic process responsible for valley incision on early Mars, which in turn influenced the topographic form of many Martian valley systems and the broader landscape evolution of the cratered highlands,” the researchers wrote.