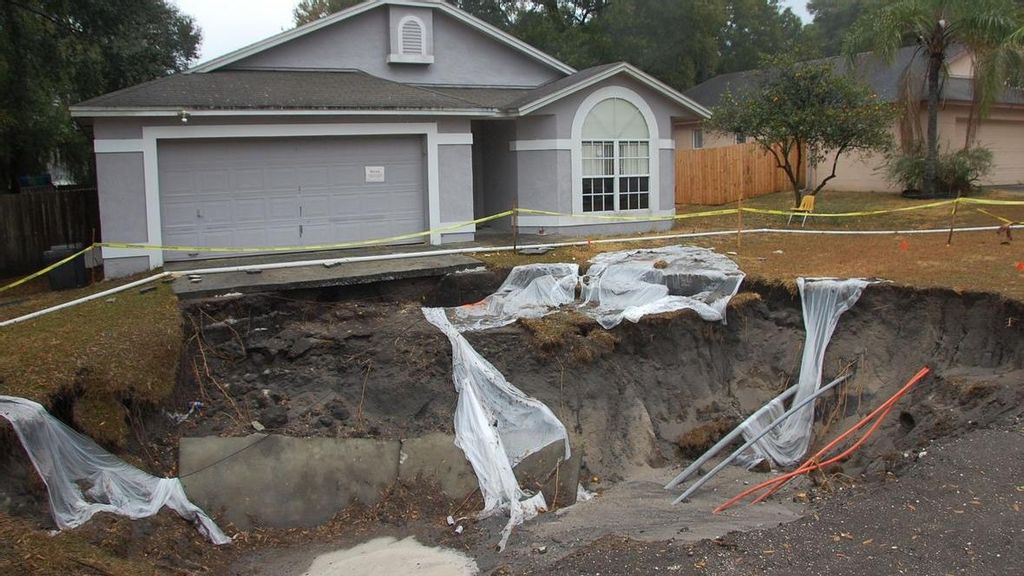 Groundwater levels can take years to recover from drought, according to a new study, and continuing to pump it leads to sinking land. Groundwater levels in Florida when the photo was taken, in 2010, dropped to record-setting lows as farmers pumped water to irrigate their plants for protection from cold temperatures. (U.S. Geological Survey)

Around the world, 2 billion water consumers, including farmers, are depleting aquifers deep underground, causing land surfaces to sink, which damages infrastructure such as roads.

Hurricanes and wildfires are commonly linked to climate change, but toxic water and sinking land due to groundwater drought are also major contributors. Water from rain and snow melt seeps into the ground to form large deposits, called aquifers. These are tapped for drinking, industry and irrigation. About 85 percent of California residents rely on aquifers for some of the water they use as a result of the historic drought in the region.

“If people pump [out] groundwater without first letting it recharge, groundwater levels [will] keep going down, the cost of pumping [will go] up and the land [will] sink,” said hydrologist Hoori Ajami of University of California-Riverside.

According to the federal government, this year saw the driest August in over 127 years, affecting 37.3 million people in California. The year was also the 9th driest over the same period. Reservoirs are drying up, pushing officials to seek alternatives such as desalinization systems.

Ajami is the principal researcher and co-author of a study, published in the Journal of Hydrology, which is the first to examine the groundwater response to drought on a continental scale. The authors analyzed 30 years’ worth of daily measurements at 600 wells across the United States. Previous examinations of groundwater drought had focused on smaller areas or used model simulations.

Researchers estimated that rainwater drought takes about two years to become groundwater drought but could take as long as 15 years. The effects may not be seen immediately but are nevertheless severe.

When groundwater drought is exacerbated by the pumping of water, it may result in subsidence — a gradual, uneven lowering of the land surface. “It is a known problem in California’s Central Valley, exacerbated by climate factors and excessive water pumping,” said Ajami. “Subsidence causes irreversible damage to infrastructure, [including] buildings and roads.”

The study found that it takes three years on average for groundwater levels to recover if the aquifers are not depleted by pumping. Recovery can take longer in places affected by excessive pumping or where the groundwater levels are deeper.

As the water level drops and the ground shifts, soil contaminants such as arsenic can shift and poison the water. Near seashores, pumping can fill depleted aquifers with seawater, making the groundwater unusable for drinking or farming.

The authors said various climate models predict future patterns of intense rainfall due to planetary warming. They suggested storing precipitation to recharge aquifers and reboot the recovery process. They also said farmers should make irrigation more efficient and switch from crops such as nut-bearing trees to crops less needy of water.

“We need to improve our climate projections to include groundwater so that we can better assess what we have and how to protect it,” said Ajami. “There are ways to better manage what we have.”