Based On A Tree Story: Iconic Bigleaf Maple Trees Are Dying Due To Climate Change

The drier, hotter climate is weakening trees, leaving them vulnerable to disease. 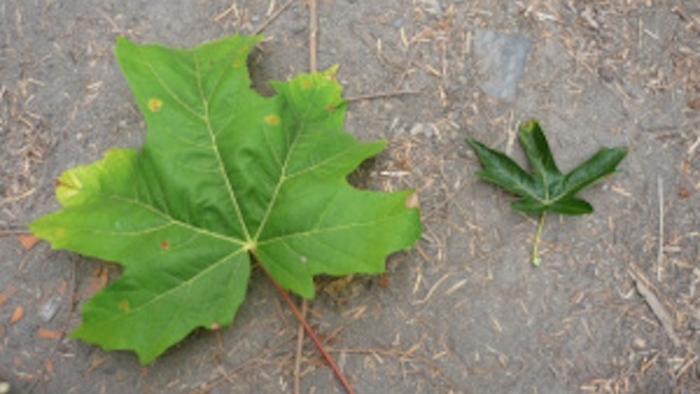 For comparison, a leaf from a healthy bigleaf maple tree (left) is placed next to a leaf from a dying tree (right). (Jacob Betzen, University of Washington)

After ruling out several diseases, forest pathologists are focusing on hotter, drier summers as the cause of the decline of bigleaf maples in the state of Washington.

Bigleaf maples, known for their 1.5-foot-wide leaves, are native to the rainy coastal region of the Pacific Northwest. But the shriveling, shrinking leaves increasingly seen in the area are sounding the death knell for these trees.

Since 2011, bigleaf maples have been dying in both forests and urban areas. The cause of the mass decline has stumped experts for years. “These trees can tolerate a lot, but once you start throwing in other factors, particularly severe summer drought as in recent years, it stresses the trees and can lead to their death,” said Patrick Tobin of the University of Washington.

An expert on forestry, Tobin is a co-author of a new study published in the journal Forest Ecology and Management. The study found that a drier climate predisposes the bigleaf maple to decline. When its immune system is weakened, the tree succumbs to disease and other stressors.

Bigleaf maple trees are also more likely to experience stress near roads and other development, especially in hot urban areas. After failing to identify any single pathogen or pest responsible for the die-off, the researchers determined that climate change and human activity are driving it.

“Managing, protecting and utilizing our urban and wild ecosystems in the face of climate change and human population growth is and will continue to be one of the major challenges facing us,” said lead author Jacob Betzen, a biological technician with the U.S. Forest Service. “This research investigating bigleaf maple is one small piece of that larger puzzle.”

Betzen said that foresters may have to change how they manage bigleaf maples in urban areas and wild forests. Planting in different locations, watering more in urban areas and using seed stock adapted to the site’s future conditions, Betzen said, may be successful responses. Natural landscapes may also need to be kept free of further urbanization.

The researchers determined that bigleaf maple trees grew less during hot, dry summers, in terms of both overall mass and leaf size. During droughts, trees use more energy trying to survive diseases and other threats, shrinking their leaves as a result.

“These results show that summer heat and drought impact the health” of trees despite the Pacific Northwest’s abundant rainfall, said co-author Amy Ramsey of Washington’s Department of Natural Resources. “Health impacts to our forests and tree species are likely to continue as we have increased periods of drought each year.”

The research team visited nearly 100 sites in western Washington, including public land and roadside sites, to test trees in decline. On public lands, they found nearly 25 percent of the bigleaf maple trees showed signs of decline.

By analyzing tree cores, the team found that the bigleaf maples’ growth has varied significantly since 2011 but has dropped specifically during hotter, drier summers. “For us, these analyses were a big piece of the puzzle,” Tobin said. “This helped us determine that their decline is a recent phenomenon that is linked to weather conditions.”