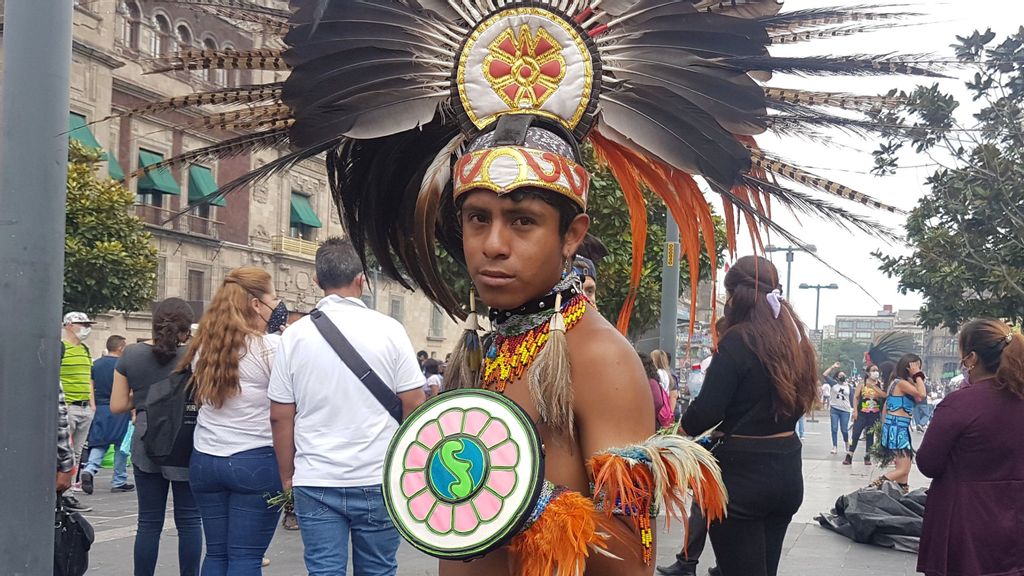 MEXICO CITY — With feather plumes and dozens of shells on their ankles, Concheros dance for several hours at Mexico City’s Zócalo. During their ritual dances, they invoke different elements of nature.

José Luis Hernández, a.k.a. “Itztli,” is the leader of the Mexica-Chichimeca warrior dance group Mazacoatl. He has been dancing in Mexico City’s Historical Center for 40 years. Mazacoatl performs next to the Metropolitan Cathedral.

Sinche childhood, Itztli was fascinated by the history of the Nahua culture. His curiosity led him to the Aztec dance.

For Itztli, the dance’s main goal is to celebrate the greatness of their ancestors.

“The dance is a representation of the mechanics of the universe. We imitate animals’ movements and gestures,” he told Zenger.

The ritual dance was first performed on June 25, 1531, on the Cerro de Sangremal in the state of Querétaro, Mexico, said Iztli. Today, people call the tradition Conquest dance, Aztec dance or Chichimec dance, and the dancers Concheros.

An Aztec dance song has different movements, which dancers classify by names. Some of the best known are the rabbit dance, the snake dance and the deer dance, but there are more than 80 options.

“If you listen to pre-Hispanic music, you will fall into an altered state of consciousness. … Every instrument is sacred and symbolizes a sound of nature, like the song of a bird,” he said.

The dance is a ritual, which begins with a purification process, consisting of burning copal, a kind of resin, to ward off bad energies.

When performing the ritual, Concheros fall into a trance. That happens because they dance to the beat of a percussion instrument called Huéhuetl, which represents the universe’s heartbeat, Iztli said.

On their ankles dancers wear another percussion instrument made of dozens of shells. Called ayoyote, it makes music every time a conchero takes a step. Ayoyotes are an essential element in the Aztec dancers’ clothing. They mark the rhythm of the dance and symbolize the serpent.

Like Hernández, Diana Karen Aguilar López, “Yolotl Meztli,” and her brother Miguel Ángel, “Mictlán,” joined the Aztec dance at a young age. Their grandmother and mother passed down the tradition. Diana Karen started dancing as a 3-year-old.

“I have a beautiful feeling when dancing and spreading my culture. It [the Aztec dance] is being lost; very few people are performing it,” she told Zenger.

Yolotl Meztli’s attire represents the wings of a butterfly. Each dancer can choose which symbols to include in their outfits. They could go run the gamut from plants and herbs to animals.

“For me, dance is poetry in motion. You fall into a state of relaxation and lose yourself in the world. You just need to concentrate on what you are doing and the rhythm,” he told Zenger.

Mictlán said he wanted to represent the aesthetic of the Huichol people in his attire, which is why he included geometric figures and flowers. From his perspective, the feathers represent the sun’s rays.

The dancers would like to invite people to visit Mexico City’s Zócalo to see their performance, but above all, to learn about the beauty and history of their ritual dance.