Little-known red African antelope takes its first steps under the watchful eye of its mother. 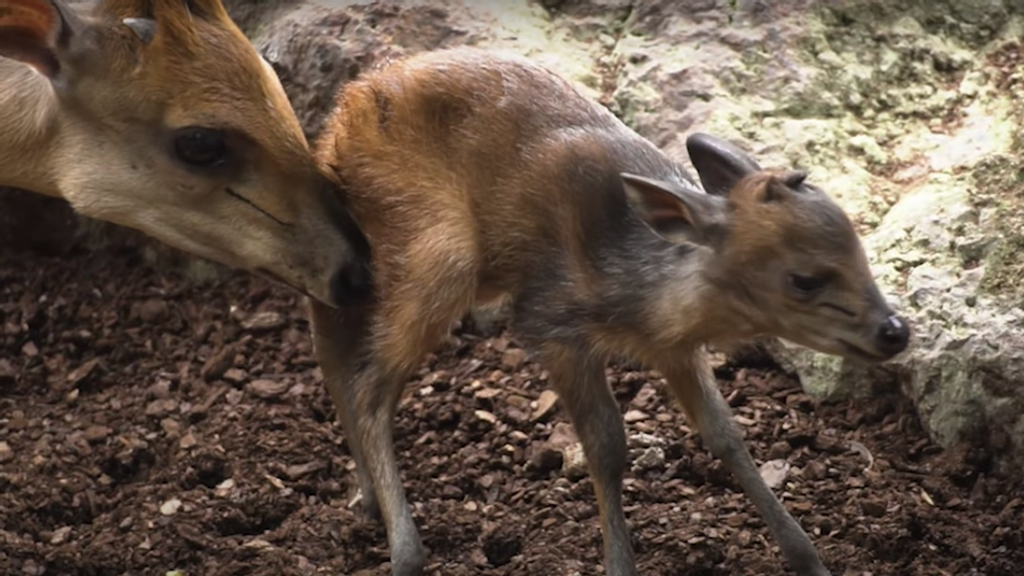 The young antelope stays close to its mother as it becomes familiar with its surroundings in a Spanish zoo. (Bioparc Valencia/Zenger)

A baby antelope born at a Spanish zoo is touching hearts.

The video captures it learning to walk and discovering its surroundings for the first time.

Footage shows the young Natal red duiker, a type of antelope, sitting on the ground shortly after its birth on Sept. 24. It then jumps to its feet and attempts to walk.

The animal stays close to its mother. It is seen standing upright as it shakily takes in its new home, and its mother tends to its well-being.

The video was posted online by the zoo Bioparc Valencia.

“The miracle of life has once again surprised visitors to the Bioparc, who have been excited to attend the birth of a little-known African antelope, the Natal red duiker,” video captions say.

“It all happened last Friday afternoon (Sept. 24), when wild nature once again showed its most tender and hopeful face, and many people felt as if they were on a trip to the distant African jungles to experience a live documentary.

“The diligent mother’s demeanor was impressive when, following her instinct not to arouse the interest of potential predators, she ate the placenta.

“It also stimulated the young, facilitated lactation and was protective. It was moving to see the goat’s first steps — and the curiosity it aroused among the rest of the animals that inhabit the same enclosure.”

The Bioparc’s goal is to change attitudes to support environmental conservation. The zoo believes this is achieved by “re-creating the beauty of nature but, without a doubt, moments like contemplating a birth are unforgettable.”

“This new birth of a Natal red duiker reaffirms Bioparc as the most important center for its conservation within the international program European Studbook, which houses the largest group in Europe: five individuals,” said the organization.

The European Studbook is a form of species management. The keeper responsible for a species collects information about births, deaths, transfers, etc., from all European Association of Zoos and Aquaria zoos.

The Bioparc’s technical team confirmed mother and the calf are well. In this type of antelope, females tend to be larger and heavier than males. Initially, the pair will stay indoors to “guarantee their tranquility,” the zoo said, before joining the others in the outdoor enclosure.

The Bioparc is the only location in Spain where visitors can see the Natal red duiker, which is included in the International Union for Conservation of Nature’s Red List of Threatened Species.