The bounty was buried to protect it from invaders. 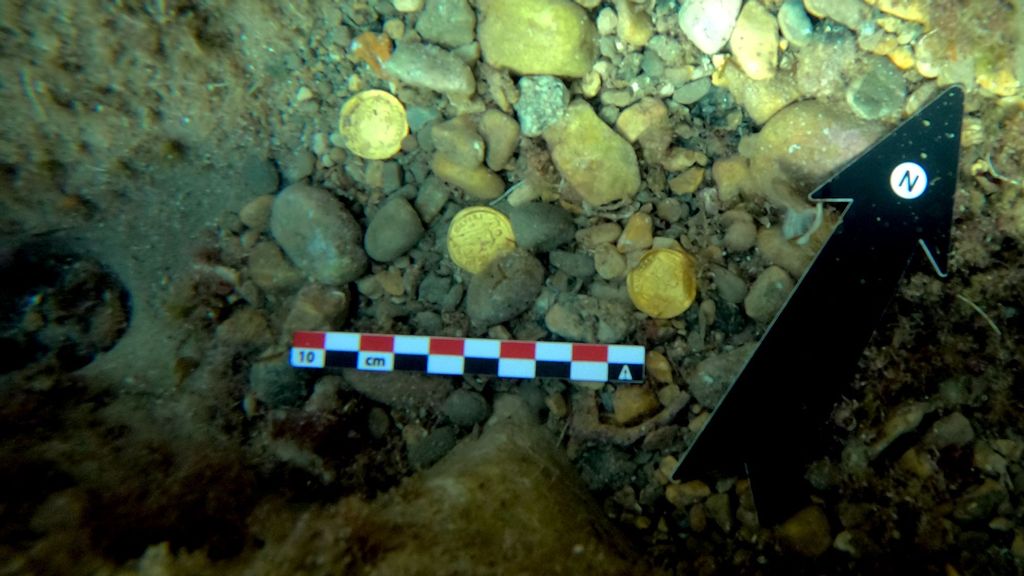 Divers find one of the largest collections of gold Roman coins in a sheltered seabed off the coast of Alicante, Spain. (University of Alicante/Zenger)

Two freedivers led archeologists to a treasure trove of 53 perfectly preserved ancient Roman coins — one of the largest collections ever found in Europe, experts said.

Spanish brothers-in-law Luis Lens Pardo and Cesar Gimeno Alcala were exploring a sheltered sea bed off the coast of Alicante in August when they discovered eight gold coins at a depth of 23 feet.

The coins’ inscriptions indicate they date to between the fourth and fifth centuries A.D.

Archeologists from the University of Alicante said the inscriptions are so well-preserved experts could identify the coins from the reigns of several emperors: Valentinian I (three coins), Valentinian II (seven coins), Todosio I (15 coins), Arcadi (17 coins), Honorius (10 coins) and an unidentified coin.

Scientists believe the coins were likely buried 1,500 years ago to protect them from pillaging invaders.

“It is one of the largest sets of Roman gold coins found in Spain and Europe,” said Jaime Molina, a professor of ancient history and the head of the university’s team of underwater archeologists.

Molina said it is an “exceptional” find since “research can offer a multitude of new information to understand the final phase of the fall of the Western Roman Empire.”

Historians say it’s possible the coins “could have been intentionally hidden to preserve them from looters. The finding would serve to illustrate a historical moment of extreme insecurity — the violent arrival in Hispania of the barbarian peoples … and the final end of the Roman Empire in the Iberian Peninsula from 409 A.D.”

Archeologists said they also found “three nails -— probably copper — and some very deteriorated lead remains that, according to all indications, could belong to a chest.”

The two freedivers initially had no idea about the magnitude of their discovery. They brought their find to the attention of Spain’s Directorate-General for Artistic and Cultural Heritage and archeologists from the University of Alicante.

Excavation of the site will continue, the archeologists said, and the coins will be restored and exhibited at the Soler Blasco Archaeological and Ethnographic Museum of Xàbia, Spain.

The local government is providing about $21,000 to continue excavation of the site.

“The Portitxol bay of Xàbia [where the coins were found] is an area well known for the abundance of underwater archeological remains currently under study: anchors, amphora [vessels], ceramic remains from different periods, metallic material, elements associated with ancient navigation, etc.,” the university said.

Archeological surveys have been promoted since 2019 by the City Council, the University of Alicante and the General Directorate of Culture and Heritage.