Crocodile-like dinosaurs stalked their prey on riverbanks, 125 million years ago. 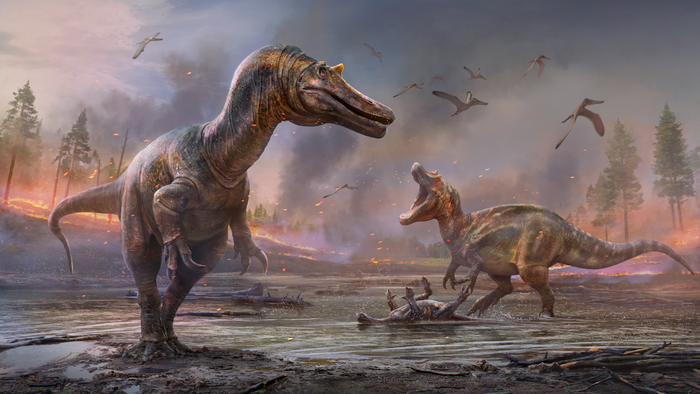 An artist's impression of spinosaurids of the Cretaceous Era — Ceratosuchops inferiodios (left) and Riparovenator milnerae. Researchers are studying the fossilized remains of two spinosaurids found on the Isle of Wright. (Anthony Hutchings)

Bones of two previously undiscovered dinosaur species that lived about 125 million years ago were found on the Isle of Wright in the United Kingdom.

Paleontologists said the bones of the carnivorous dinosaurs closely resembled those of a Spinosaurus and that the skulls were crocodile-like, allowing the dinosaurs to hunt for prey on land and in water. They are thought to have been 29 feet in length with three-foot skulls.

The Isle of Wight is in the English Channel, separated from the mainland by a narrow strait. It has been designated as a UNESCO Biosphere Reserve, considered “learning places for sustainable development.”

The only spinosaurid skeleton previously discovered in the U.K. was a Baryonyx, found in Surrey on the English mainland in 1983.

“We found the skulls to differ not only from Baryonyx but also one another, suggesting the U.K. housed a greater diversity of spinosaurids than previously thought,” said Chris Barker, a doctoral student at the University of Southampton and co-author of a paper in Nature Scientific Reports describing the finds.

According to researchers, it was quite common for two similar dinosaurs to live in the same ecosystem, which would have had a warm, Mediterranean-like climate during the Early Cretaceous period (145 million–100.5 million years ago).

About 50 fossilized bones have been uncovered from the Isle of Wright excavation. They will eventually go on display at the Dinosaur Isle Museum in Sandown.

One of the dinosaurs whose fossils were found on the Isle of Wright was named Ceratosuchops inferodios (“horned crocodile-faced hell heron”). It featured a series of low horns and bumps on its brow. Its name pays tribute to its probable hunting style, which may have resembled that of modern herons. As long-legged, sharply beaked birds, herons stalk the margins of bodies of water to skewer and gobble their prey.

The second dinosaur was named Riparovenator milnerae (“Milner’s riverbank hunter”) in tribute to British paleontologist Angela Milner. She discovered and studied Baryonyx, making significant contributions to the understanding of these predatory lizards.

While they may have first evolved in what is now Europe, the study suggests that these spinosaurids might have been found in Asia, Africa and South America.

Amateur fossil collectors Brian Foster and Jeremy Lockwood aided in the discovery and the study. Foster said that this was the “most exciting find” he has made in 30 years, while Lockwood said they knew when they discovered the dinosaur snouts that they were something “rare and unusual.”