Spidermom: How A Prehistoric Arachnid Protected Her Brood 99 Million Years Ago

Mother’s last act was to try to protect her hatchlings as they were all engulfed in tree sap amber. 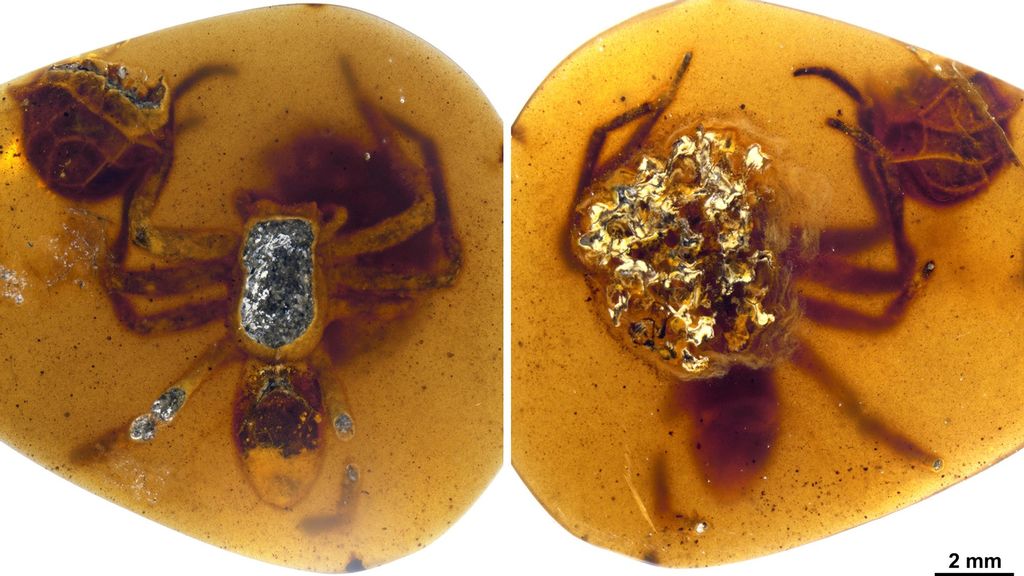 A 99-million-year-old spider mom frozen in time in solidified amber is the oldest piece of evidence showing that spider mothers kept a close eye on their hatchlings, scientists say.

Four separate chunks of amber were mined in northern Myanmar revealing dozens of spider young and a spider mom cradling its egg sack with its long legs.

Researchers at Capital Normal University in Beijing found that the ancient spider is a member of the now-extinct Lagonomegopidae family, which roamed the planet feeding off insects during the Cretaceous period (145 million to 66 million years ago).

The female spider was found in the protective position that modern spiders take up when protecting their young from predators. The amber preserved an estimated 12 prelarvae and their egg membranes, which were wrapped in the egg sac’s silk.

“Adult lagonomegopid females probably built and then guarded egg sacs in their retreats or nests, and the hatched spiderlings may have stayed together with their mother for some time,” the researchers wrote in the Proceedings of the Royal Society B: Biological Sciences.

In another chunk of amber, the researchers found 24 spiderlings, which were mostly broken and deformed during the preservation process. One of the other chunks contained an estimated 26 baby spiders, and the other one held 34.

As all the young spiders were the same size, the study concluded that it was almost certain they were siblings and that their mom was keeping a close eye on them when they were frozen in amber.

The amber chunks also contained other insects, including an ancient cockroach and an ancient wasp.

The researchers used CT scans to identify the spiders and uncover details about the minuscule hatchlings. They also weighed in on the mysteries of spider silk, which is both incredibly strong and elastic, and is used to spin webs, trap prey, protect eggs and even mate.

“The ability to produce silk is generally considered a defining feature of spiders,” the researchers wrote, saying “one hypothesis for the origin of silk production in spiders is that silk evolved from proteinaceous secretions involved in construction of the egg sac in spider ancestors. In other words, the original function of spider silk may have been to protect the eggs.”

The amber chunks with the ancient spiders inside are being kept at the Key Laboratory of Insect Evolution and Environmental Changes at the College of Life Sciences at Capital Normal University in Beijing.