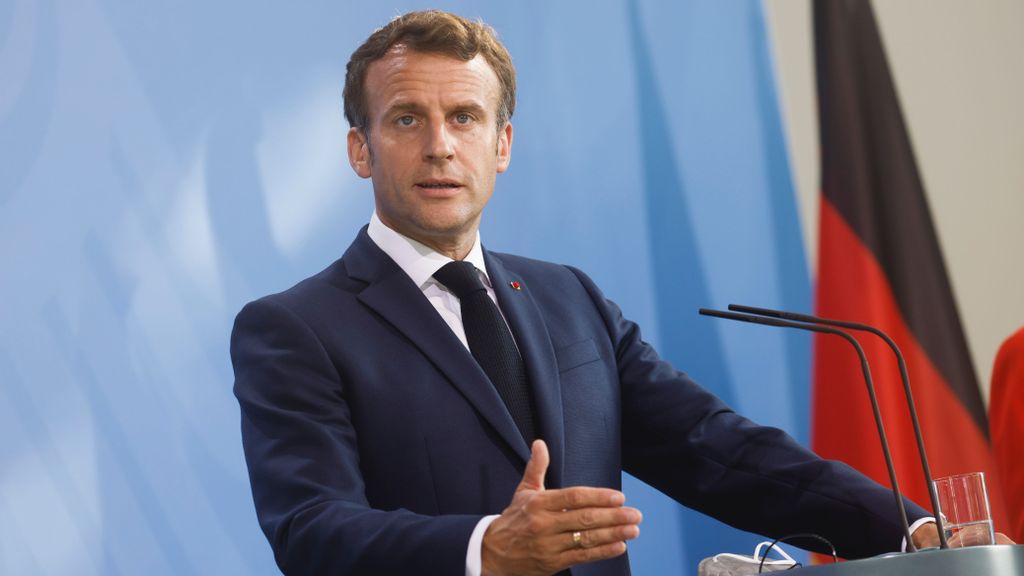 President Emmanuel Macron of France has criticized American “wokeness,” along with older members of the political and cultural establishment, while younger French activists have embraced the controversial ideology. (Axel Schmidt/Getty Images)

After French President Emmanuel Macron recalled his ambassadors from the U.S. in the wake of a submarine deal with Australia that was torpedoed by President Joseph R. Biden Jr.’s administration, French media are now reexamining everything about America.

One of France’s leading magazines, Le Spectacle Du Monde, ran a cover story titled “The Suicide of America.” It blamed America’s retreat from Afghanistan on “a woke dictatorship” and questioned whether the American “empire was collapsing.”

In the same issue, an article faulted U.S. universities as islands of extremism, where even students’ Halloween costumes are policed, citing Yale University as a place where “offensive” costume-wearers were punished.

A few miles from where U.S. soldiers landed on the beaches of Normandy, a conference of leading politicians, journalists and intellectuals devoted a panel to “America’s woke ideology.” Some panelists seemed alarmed by the trends they saw in American society, including alleged “woke” censorship by Twitter, Facebook and other U.S. tech giants.

Jean-Guillaume de Tocqueville, a lineal descendant of the 19th-century liberal philosopher, who presides over the conference, is also friendly to America. He works at the Paris office of Jones Day, a major U.S. law firm. (Full disclosure: Tocqueville is an investor in Zenger News). Still, the panel was full of criticism about the perceived decline of free speech in America.

“Our mantra is that we should talk even if we strongly disagree. Nothing prevents you from talking and exchanging and dialoguing,” Jean-Guillaume de Tocqueville told Zenger, shortly after the 2021 Tocqueville Conversations concluded.

“The French Revolution was an event that led to a bloody civil war because the people who were not in agreement with the new ideas, the really revolutionary ideas, were just killed and beheaded,” he said. “It was not a good way to debate.”

“If speech opposes that preferred narrative, we are told it is itself an act of violence. So speech is violence. And responding to such speech with actual violence is an act of self-defense. I think that this is at the core of what is happening to us,” said former U.S. Circuit Court of Appeals Judge Janice Rogers Brown.

The term “woke” itself has become controversial in the U.S., even as it becomes more widely used in France.

“The progressive political community in the U.S. believes in working together with integrity and dignity as we reckon with our past and build a better future. We don’t use the word “woke” to describe ourselves or our values. However, conservatives in this country use “woke” as a loaded and pejorative word to criticize progressives, hoping to divide and distract as they take our freedom to vote and deny us the resources our families and communities need to succeed,” Andrea Catone, executive director and co-founder of Action Together Network, told Zenger.

The French are far from united in their opposition to “woke” American philosophy.

While younger French activists have embraced political correctness, older members of the political and cultural establishment have reservations about the controversial ideology.

The emphasis on racial relations that “wokeness” brings is a stark contrast to the universalism prominent in France since the French Revolution. While American social initiatives often prioritize race, France relies on a color-blind model by allocating resources to students and others based solely on financial status. This legal and cultural difference makes it easier for the French to criticize the Americans.

In an interview with Elle magazine earlier this summer, President Macron said American-imported “woke culture” is “racializing” France and creating more division among minorities. Macron’s comments are seen by some as an attempt to cultivate moderate voters in France, as he is up for reelection in April 2022. The election is expected to be close.

Macron’s anti-woke sentiment is widely shared in his government, even by the delegate minister for gender equality and diversity, Elisabeth Moreno, a black woman born in Cape Verde, off the coast of western Africa. In a televised interview with Bloomberg, she praised the increased awareness on social issues, but rejected cancel culture because it can “kick out people from ongoing debates because they think otherwise.”

The French have been wary of “wokeness” for a while. The country’s reckoning over the “Me Too” movement against sexual abuse and harassment came to a head in 2018, when a group of more than 100 prominent French women, including actress Catherine Deneuve, penned a letter claiming the movement had gone too far. The women warned of “puritanism in the name of a so-called greater good” and compared the new feminist movement to a “witch hunt.”

The letter received volleys of criticism from prominent French feminists, including Sandra Muller, the founder of “BalanceTonPorc” (which translates into English as “expose your pig”), the French equivalent of the “Me Too” movement.

When “BalanceTonPorc” came for Dominique Boutonnat, a powerful French producer accused by his godson of sexual assault and attempted rape, activists were quick to point out that Macron previously appointed him as the president of the National Center for Cinema.

Macron is a vocal supporter of equal rights for women and the French version of the Me Too movement, but said during a speech on the International Day for Elimination of Violence Against Women in 2017 that he doesn’t want to see a society where “every man/woman interaction is suspected of domination.”

As the French are wrestle with the changes “wokeism” may bring to their society, a new book in the United States is addressing its effect at home.

“The two most toxic ideologies of the 20th century were Nazism and Marxism. In my opinion, Nazism was identity politics on steroids, and Marxism was an oppressor narrative on steroids. The combination of the two is actually modern wokeism that was born in the United States,” said Vivek Ramaswamy, author of Woke Inc.

“I do think” said Ramaswamy “that it’s actually becoming one of America’s most toxic exports, the rise of modern wokeness.”