Young eastern grey kangaroo begins exploring the world — before diving back in. 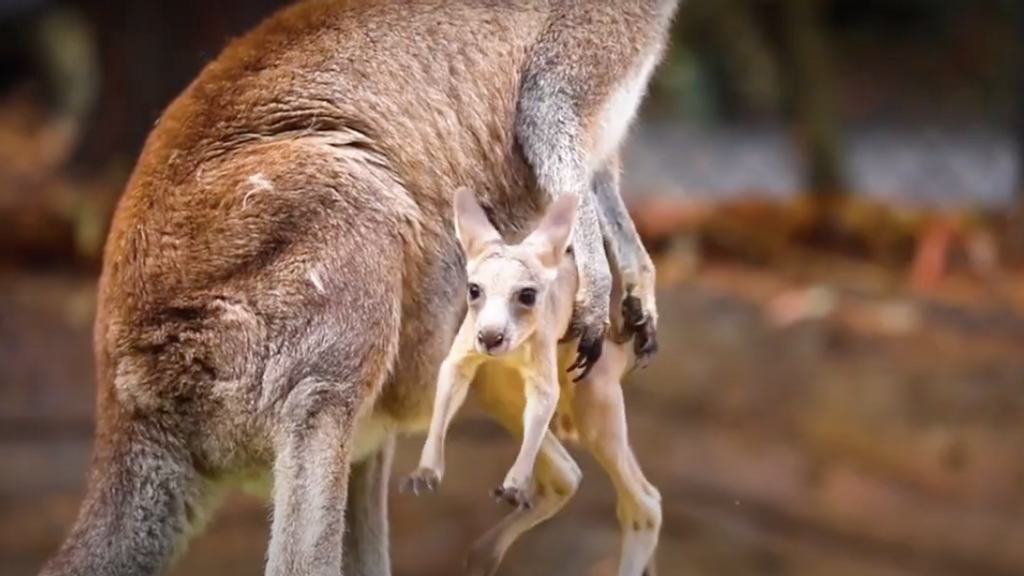 “Jumping Jack,” as zookeepers named the joey, takes his first exploratory steps outside of his mother's pouch. (Australian Reptile Park/Zenger)

An Australian “joey” — a nickname for a baby kangaroo — is hopping right to it.

“Jumping Jack,” as zookeepers named him, is seen in video taking its first exploratory steps outside of its mother’s pouch. After checking out the territory close by, bounding up and down, “Jumping Jack” turns and heads back to the pouch to jump back in.

The video is from the Australian Reptile Park  in Somersby, New South Wales, and to date has more than 13,800 views on the zoo’s Instagram page.

“Although small, the joey is already gaining confidence, seemingly wobbly on his tiny little feet and learning to explore the Australian Reptile Park,” the zoo said. “For now, the joey still sticks closely by his mother, also known as ‘Joy”s,’ side but will presumably begin to adventure further away as he gets older.”

The reptile park’s director, Tim Faulkner, said: “I love when we see kangaroo joeys begin to pop their heads out of the pouch, and we’ve seen a few after the past few weeks! It’s always so exciting when they take the great big leap from mum’s pouch, is there anything cuter than the first wobbly hops of roo joey?! And Jumping Jack is certainly living up to that.”

Jumping Jack is an eastern grey kangaroo, a species from the eastern part of the country. They are the second largest and heaviest living marsupial in Australia after the red kangaroo.

Eastern grey kangaroos have a woolly fur — silvery-grey to dusky greyish-brown, according to the reptile park. An adult male can reach a height of nearly 7 feet when standing and weigh more than 130 pounds. Females, however, are rarely taller than 5.9 feet.

In their habitat of grasslands and woodlands, the eastern grey kangaroos usually rest in the shade in the early part of the day and emerge in the afternoon to graze in large groups. They are found in much of Queensland, Victoria and Tasmania.

The eastern grey kangaroo is listed as “stable” on the International Union for the Conservation of Nature’s Red List of Threatened Species.

“The species is present in many protected areas and is protected by national legislation,” the Red List says. “Regulated harvesting takes place under the supervision of state and federal governments (the latter only manages harvesting when animals are exported).”

The zoo said is closed due to the coronavirus lockdown. Zoo officials said they are keeping busy by posting educational videos on social media and live streaming video of the animals until the zoo reopens to visitors.