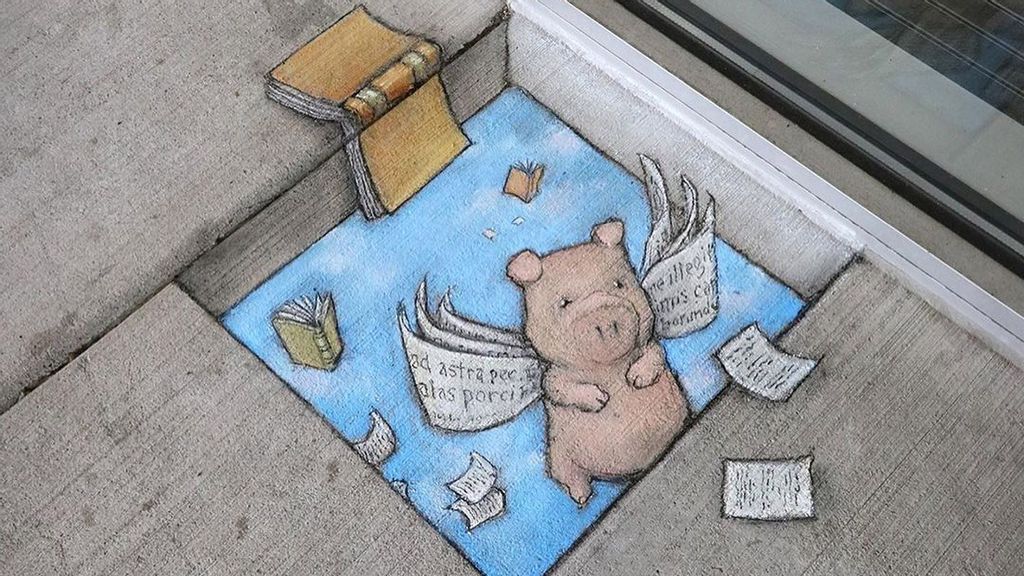 When pigs fly — and apparently they do — in the chalk drawings of street artist David Zinn. (@davidzinn/Zenger)

Whimsical little “animals” pop up out of nowhere on sidewalks and streets across the globe, thanks to the talent and wit of David Zinn.

Zinn, who is from Michigan, says his art is both therapeutic for him and helps add color to neglected and forgotten parts of a city.

He uses chalk, pastels and willow charcoal to create attention-getting 3D drawings of pigs, mice, frogs, dogs, reptiles and occasionally, children, climbing out from the pavement, or perhaps a storm drain, or cruising along in a miniature vehicle.

His Instagram page of short clips and photos of his art has 458,000 followers.

Zinn said his career as a street artist started partly because he needed an excuse to spend time outside and because he finds the temporary nature of drawing very therapeutic.

“Not worrying about the future of a piece of art makes it easier to enjoy the process of creating it,” he said.

Zinn “has been creating original artwork in and around Ann Arbor, Michigan since 1987. For more than 20 years, he freelanced for a wide variety of commercial clients while simultaneously sneaking ‘pointless’ art into the world at large,” his website says.

He likes to focus on “forgotten and ignored spots as they benefit most from the extra attention.”

Inspiration for his art comes from the streets. “Normally the subject is decided by the naturally occurring elements already present in the location,” he said.

For example, one of his drawings shows a crack in the pavement with a mole poking its head out from under the surface.

“Sometimes the inspiration is obvious — for example, a traffic cone as a hat — but more often they are only specks that begin the process and become invisible along the way.”

What started out as a hobby to get him out of the house has snowballed into a full-time job that involves running his social media pages, drawing commissioned pieces and conducting workshops.

Each drawing takes him anywhere from 10 minutes to three hours to complete, he said. He then takes photos and videos of the artwork, since it is typically gone within days due to exposure to the elements.

Zinn received the Golden Paintbrush Award from the Ann Arbor Public Art Commission in recognition of his art’s positive effect on the community.

He hopes his drawings will encourage others to believe in their own ability to create art, even in unexpected places.

Most of Zinn’s creatures appear on sidewalks in Michigan, but some have surfaced as far away as subway platforms in Manhattan, village squares in Sweden and street corners in Taiwan, his website says.