Opposition leaders, scientists accuse Bolsonaro of presenting a distorted economic and environmental image of his country. 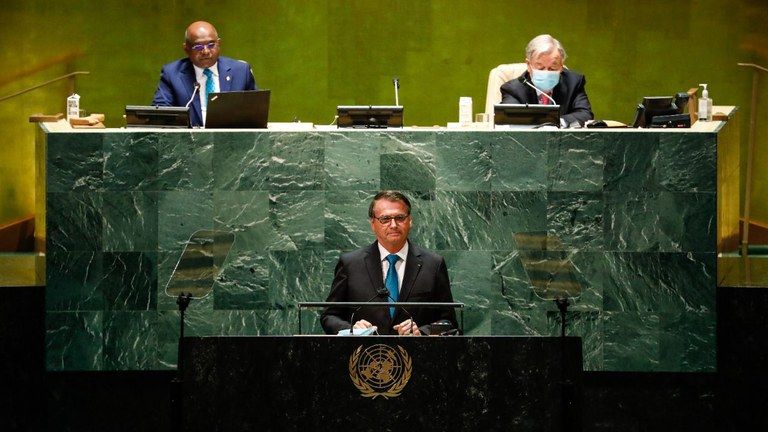 President Bolsonaro's speech at the United Nations on Sept. 21 was intensely criticized back home for presenting a false reality of Brazil. (Alan Santos/PR/Public Domain)

“Bolsonaro had the opportunity to show the world he is committed to facing the problems his government has caused to the environment, public health and to workers’ rights. He could also show where the Brazilian economy really stands, but he preferred to lie,” he said.

“The president lied when presenting environmental data and figures on the economy. He lied about data regarding the pandemic. He lied on all issues. He also reaffirmed his strategy of fighting the pandemic through initial treatment and herd immunity instead of the vaccine,” Sen. Carvalho, from Sergipe, in northeast Brazil, told Zenger.

Carvalho also criticized Minister of Health Marcelo Queiroga’s behavior. Queiroga was a member of the Brazilian delegation and reacted with an obscene gesture to a protest in front of the delegation’s residence in New York City’s Upper East Side.

“This gesture clearly shows why he [Minister Queiroga] is part of Bolsonaro’s government. Queiroga lacks training, education and respect for democracy, which are required characteristics to be part of the government,” said the senator.

“Bolsonaro participated in the Assembly in a denial mode and took Minister of Health Marcelo Queiroga with him. Queiroga got infected with COVID-19. Nothing is more significant,” said Motta.

That Queiroga was diagnosed with the disease during the event shows Bolsonaro’s “irresponsibility and denial of everything the world’s population has been doing to face the pandemic,” he said.

After receiving the COVID-19 diagnosis, Queiroga could not return to Brazil with the delegation; he will stay in a New York City hotel for a 14-day quarantine.

Cristina and Bianco were not part of the delegation traveling to the United States. Regarding Bolsonaro’s son, he criticized on social media the health passport required to carry out certain activities.

“We know the vaccines were made faster than they should be. I took Pfizer’s first dose and got infected with COVID-19. Does that mean the vaccine is useless? I don’t think so. But it’s another argument against the health passport. Studies on side effects and efficacy are now being conducted,” Eduardo Bolsonaro said on Twitter.

Bolsonaro “said that deforestation in the Amazon decreased compared to last year, simply taking the data for one month and without looking at last year’s history and the history of his term as a whole. Deforestation has increased in a very worrying way throughout his administration, not only in the Amazon but in all Brazil’s biomes,” Guedes Pinto said.

“Bolsonaro also said he strengthened Brazil’s environmental enforcement agencies, which is not true. The government reduced the budgets of the Brazilian Institute for the Environment and Renewable Natural Resources and the Chico Mendes Institute for Biodiversity Conservation in large amounts. Besides, the president did not speak about the different bills that he is proposing and supporting in the Chamber and the Senate to reduce environmental legislation,” he said.

Guedes Pinto mentioned as an example a bill regulating the exploitation of economic activities on indigenous lands, including mining, oil and gas extraction, electricity generation and agriculture.

“This and other projects greatly weaken environmental laws in Brazil and could result in even greater deforestation,” said Guedes Pinto.

Carlos Souza Jr., a researcher at the Amazonian Institute of Man and the Environment, said that President Bolsonaro omitted data on deforestation in the Amazon.

Bolsonaro referred to a 32 percent reduction in deforestation for August at the United Nations General Assembly. However, “it is worth noting he considered only the variation between August 2021 and August of last year. The data indeed point to a downward trend. But the warning data is generated monthly. It should be used with great caution when speaking about the deforestation trend.

“To understand cumulative deforestation, the correct thing to do is to use a longer monthly series. Deforestation in the Amazon has been increasing since 2013, and is a chronic problem,” Souza Jr. said.

“During his speech, President Bolsonaro addressed his followers in Brazil, that is, 20 percent to 25 percent of the voters. He did not seem very interested in saving Brazil’s image abroad. It was a speech for internal consumption and for his supporters,” said André Luiz Reis da Silva, an International Strategic Studies professor at the Federal University of Rio Grande do Sul.

“In terms of health, Bolsonaro has supported measures that go against the lockdown in Brazil. What we heard the most were distortions of reality. He criticized the health passport, but was not allowed into the city’s restaurants in the United States [because he lacked proof of vaccination against COVID-19],” Reis da Silva said, claiming the “international mockery” hurt Brazil.

Augusto Neftali de Oliveira, a political scientist at the Pontifical Catholic University of Rio Grande do Sul’s Faculty of Social Sciences, said that Bolsonaro showed world leaders at the UN a nonexistent Brazil.

Bolsonaro presented “a false vision, disconnected from reality. It had an internal logic that manages to appeal to his followers, but his speech is not true for the external audience. Brazil has had almost 600,000 deaths from COVID-19,” de Oliveira. “We have a destroyed economy, poverty and the country’s overall situation is very sad. No other government has been as inconsistent, unconcerned about the consequences and its actions in Brazil’s geopolitical relations as Bolsonaro’s.”

«Previous Post
Creating The Crops We Need, Not The Ones We Have»Next Post
Spidermom: How A Prehistoric Arachnid Protected Her Brood 99 Million Years Ago