Stray kitten parks itself in the pet food aisle and lets Istanbul customers do the rest. 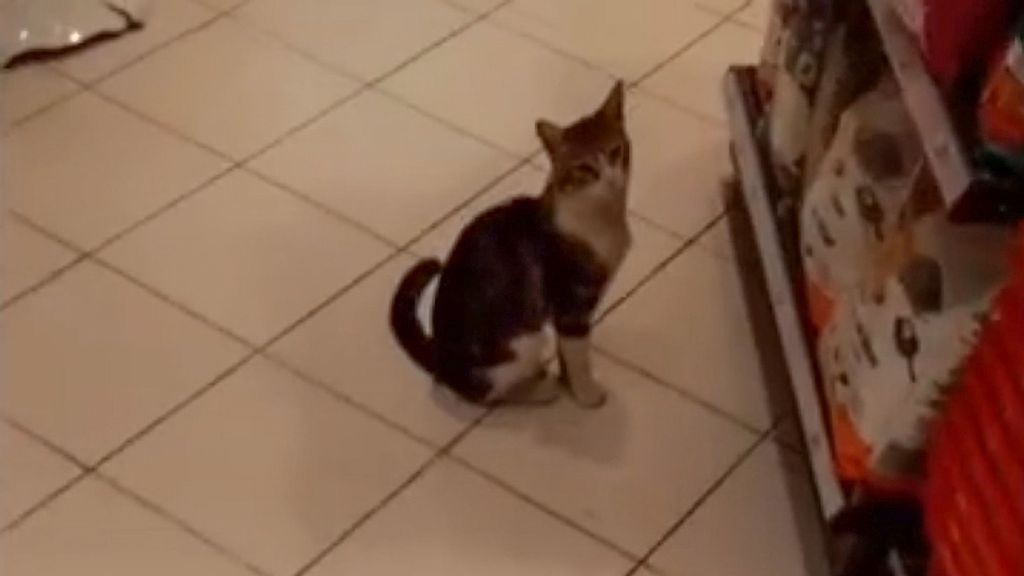 The little cat waits in front of the stand where cat food is available. Customers at the Istanbul store are captivated by the kitty and often buy him food. (@ozanngoksu/Zenger)

A kitty in Turkey uses his patience as a meal ticket.

Video on Instagram shows the cat sitting in front of a supermarket shelf filled with cat food before a kindhearted shopper stops to buy some food for the hungry feline, apparently a stray.

The scene was filmed by Ozan Goksu, who was shopping at a Rossmann store in Istanbul on Sept. 26.  He told Zenger that “everyone should help stray animals within their means.”

The video has more than 14,000 views on Goksu’s Instagram page.

The video shows Goksu coming across the animal in the supermarket as it waits in front of the cat food products. Goksu picks up a packet of Whiskas brand cat food and beckons the feline to follow him.

The cat follows him through the checkout and outside the store, where Goksu empties the contents on the ground.

“After sharing the video, I received a lot of nice comments and messages. People who have also seen this cat reached out to me,” Goksu said.

“It turns out that this stray male cat is constantly wandering around the Rossmann store, doing the same trick to different customers every time he gets hungry.”

Twitter user Bayirturbu wrote: “Is that Rossmann in Kadikoy? I fell into the same cat trap there!”

Ozlem wrote: “This cat is a regular here. He always waits in front of the food stand and makes people buy food. I fell into his trap, too.”

Goksu asked people to be more conscious about stray animals.

“I am an animal activist, and for two years I have been making videos with animals and sharing them on my social-media accounts to raise awareness,” he said.

Istanbul is often referred to as the City of Cats, or Catstanbul. It is home to a large feral cat population, with estimates ranging from 100,000 to more than 1 million.

Many Turkish citizens view stray cats as communally-owned pets. The country has a no-kill, no-capture policy.

They are not alone in their love of felines. The American Veterinary Medical Association estimated in 2018 that 25.4 percent of U.S. households had cats as pets.  President Bill Clinton’s cat, Socks, was a media favorite during his tenure. The cat was often taken on publicity tours and visits to nursing homes and schools. Socks, a stray, was adopted by Clinton’s daughter, Chelsea, when her father was governor of Arkansas.