Popcorn With Zenger: ‘The Guilty’ (2021) Is An Exciting Exercise In ‘Less Is More’ 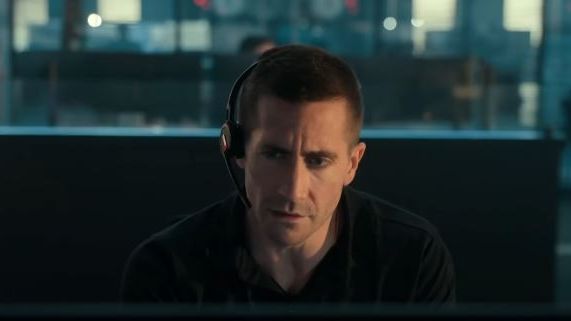 Jake Gyllenhaal plays a troubled cop who has been reassigned to take 911 calls pending his trial in “The Guilty,” the remake of a 2018 Danish film of the same name. (Netflix)

One of the positives of the current era of “made for streaming” movies is that they can now be made without the studio pressure for massive box office returns, which tends to hinder creative freedom.

One of the downsides is that with lower expectations, most streaming-service films tend to reside in the land of mediocrity, instead of taking advantage of the opportunity.

Not Netflix’s “The Guilty” (2021), an American remake of a 2018 Danish film of the same name. Hollywood productions have been forced to get creative about completing movies with COVID-19 restrictions limiting how cast and crew can interact.

Similar to the 2021 BBC Two film “Together,” “The Guilty” is bare-bones filmmaking showing just how creative some in Hollywood can be with less. Even though it’s a remake, the latest “The Guilty” is long on originality.

The Story: Jake Gyllenhaal plays Joe Baylor, a Los Angeles police officer who is currently on reassignment pending the outcome of a manslaughter case against him. Joe is a short-tempered mess whose conduct and divorce make him a hot target for the city’s newspapers, who hound him while he is trying to do his job.

Joe is relegated to answering 911 dispatch calls while he awaits his day in court. The city is in a state of chaos due to a massive wildfire and a major protest thinning out resources for LA Fire and Rescue. Joe receives a call from a woman named Emily (voiced by Riley Keough), who claims that she has been kidnaped by her ex-husband. Joe has little information to give California Highway Patrol, and they are unable to find her.

Joe decides he has no choice but to bend the rules of legality, using his resources to find Emily and save her life. However, the deeper Joe dives into this case, the more details he discovers that will put him on the brink of losing his mental and physical health.

Bright Spots: “The Guilty” is anything but flashy. From a filmmaking perspective, it is quite impressive how director Antoine Fuqua and screenwriter Nic Pizzolatto were able to put together a solid thriller with very little.

While there are many names attached to this film, only three actors appear on screen, including our protagonist. “The Guilty” is a bottle film that gets the maximum out of using Gyllenhaal as its avatar. Almost exclusively shot on two different sets, the film lives and dies on his performance of emotional “tell-don’t-show.”

Gyllenhaal does an outstanding job with the seemingly impossible task of taking a character with an unlikeable and violent personality and making him into a man the audience roots for to help save Emily and her children. The film is full of twists and turns to keep viewers on their toes. Just when you think you know who to root for, the story flips on a dime while dropping little Easter eggs about the bigger picture.

Director Fuqua had the unusual task of filming this movie over the course of two weeks from a van in order to prevent breaking COVID-19 protocols. Along with getting a star-studded voice cast to provide their lines via a video-sharing service, the combination of Fuqua and Gyllenhaal manages to tell an intriguing story from both in front and behind the camera. As a result, “The Guilty” is one of the most interesting films of the year.

Weak Spots: There’s one missed opportunity in the story: the explanation of Joe’s background. We know that he was involved in an incident where someone died, and there is even an emotional breakdown late in the film, but that portion of the story is never explored in-depth. That makes it nothing more than an excuse for Joe to be taking 911 calls in the first place.

There are also points in the story when Joe is outright confrontational with callers, begging the question of how someone on reassignment can get away with such conduct. However, the film doesn’t spend too long focusing on plot holes.

The Takeaway: “The Guilty” is a story within a story, but for a Netflix film, the intensity of Gyllenhaal’s performance — along with a roller coaster of emotion that keeps you on the edge of your seat — makes this one of the best streaming films of 2021.

See or Skip: This is one of the top highlight films that you’ll see from Netflix from this year. Fans of Jake Gyllenhaal will definitely want to add this film to their watch queue.