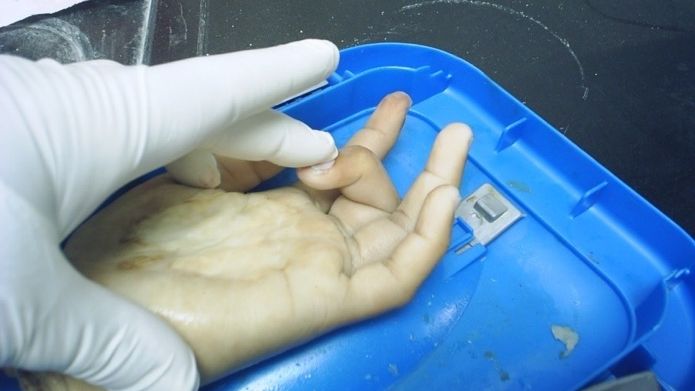 After the rehydration process, the corpse's skin and organs recover the appearance they had when the victim died. (Photo courtesy of Alejandro Cárdenas)

Finding criminals is often a difficult task for local governments in Mexico — especially the killing of women.

“Perpetrators may kill a woman and bury her, intending to delay the authority’s access to the crime scene, preventing the authorities from taking action,” Rodrigo Caballero, a public prosecutor in Ciudad Juárez, told Zenger.

Femicides — the violent killing of women or girls because they are females — have been common in northern Mexico for decades. During the first six months of 2021, 150 women were killed in Chihuahua, according to the state Attorney General’s office. Ninety of those women were murdered in Ciudad Juárez, El Paso’s neighboring city, and 14 of the cases were classified as femicides.

Caballero attributes the problem to the machismo culture that prevails in the area. “There are people who believe they can kill women and go unpunished,” he said.

Criminals usually leave the victims’ bodies in the desert or in common graves, where high temperatures and fauna fasten the decomposition process. Their traits may be difficult to match with the reports of the victims’ relatives.

To combat the problem, Dr. Alejandro Cárdenas, a forensic expert, carries out a corpse rehydration and putrefaction reversal process, immersing part of the corpse in a solution. After a few days, it regains a similar appearance to the one it had at the time of death.

Through Cardenas’ rehydration technique, investigators can obtain corpses’ fingerprints and match them with those in official databases. The process makes traumatic or pathological injuries evident and assists in determining if the victim died of a heart attack, liver cirrhosis, cancer or another cause.

“Nothing can be done if the corpse was burned, charred, or dissolved in acid, or if the fauna ate it up to the skeleton. However, it is common for a skeleton to keep skin remains on the hands or face. Some pieces might be intact if the corpse was lying on its back because scavengers are usually unable to reach there. We may find a tattoo that a family reported on a piece of skin. We usually find many things in the corpses, even if they are in poor condition,” he said.

Since Cardenas began experimenting with his technique in September 2004, he has recovered more than 1,870 corpses.

Ciudad Juárez, like many border towns, has a floating population. Cárdenas has recovered some unclaimed corpses, probably belonging to migrants who died while attempting to cross the Rio Grande.

“We have recovered corpses from people from different states or countries, including Cuba, Guatemala, Honduras, Colombia or even Africa. The doctor’s work has allowed us to get their fingerprints and match them with databases provided by foreign ministries or consulates,” said César Augusto Ríos, a public prosecutor in Ciudad Juárez.

Cardenas’ work has attracted the attention of other Mexican prosecutors.

He has collaborated on investigations outside his state. One was the media case of Holger Hagenbusch and Krzysztof Chmielewski, two European cyclists who were found dead in a garbage dump in the southern state of Chiapas in April 2018. After the rehydration process, investigators determined that one died from a head injury caused by a massive object, while the other was killed by a bullet and not in a car accident, as the local authorities initially reported.

Cardenas’ technique has also sparked the interest of prosecutors in several countries who want to apply it in their forensic departments. Funeral homes directors have expressed interest in the process, too. Although Cárdenas does not rule out another use, he wants its primary application to be for forensic medicine in Mexico.

“I hope prosecutors of Mexico’s 31 states … become interested and that the Attorney General’s office supports the victims and their families using this technique. I hope funeral homes resort to it very soon, too,” he said.

“The rehydration technique helps families overcome the grief. It is not the same to see a stiff body, with darkened skin, without any features, as seeing it once rehydrated. The perception changes. Usually, families react with gratitude,” said Caballero.

“It is more a humanitarian than a legal issue,” Ríos said.

Investigators of Ciudad Juárez Public Prosecutor’s Office received a call on March 21, 2005, reporting a finding of human skeletal remains in the desert area of San Agustín, a town located about 21 miles from the city.

The team visiting the site included investigative police officers, experts, an anthropologist, an entomologist and a medical examiner. One of its members found the bones first. Later, the team discovered a skull on top of a bush. The area’s scavenging fauna had devoured part of the remains, altering the crime scene.

After recovering, reviewing and analyzing most of the remains in the lab, the experts determined they belonged to a woman. Establishing the cause of death was the next challenge, but it seemed impossible. Neither the skull nor the bones had fractures that suggested an assault. Without a cause of death, a police investigation could not begin.

Experts then found what appeared to be an old piece of corrugated cardboard. They took it to the lab. One of the experts recommended subjecting it to a rehydration process, which was then a new technique.

After a few days, the investigation took an unexpected turn. What looked like corrugated cardboard was the victim’s skin. During the decomposition process and after animal predation, it detached itself, remaining almost intact. The rehydration process recovered the skin’s appearance at the moment of death. Pores, scars, birthmarks, moles and other traces became visible, allowing the team to determine the cause of death.

“It looked as if someone had removed the skin like a nightgown,” Cárdenas said. “The skin gave us a lot of information about how savagely the perpetrators took her life. There was a mark of ecchymosis [bruises], bites and stab injuries. The skin also indicated the perpetrators mutilated her. There were perfect linear cuts at the height of her shoulders and neck, suggesting they beheaded her,” he said, explaining the findings served as proof the offenders dismembered her.

After the team’s intervention, the cause of death changed from “undetermined” to “intentional homicide,” and relatives were able to claim the remains. Subsequently, an investigation led to the perpetrator’s capture, and he is currently serving a prison sentence.

Cárdenas has rehydrated corpses up to 10 years old, which has made him think, what would happen if he applied his technique to an Egyptian mummy, several thousands of years old?

“I think it is possible [to rehydrate it]. I have never had the opportunity to work on a corpse that old. If they give me one, I’d be happy to process it,” he said.