The ‘Bronze Bomber’ is looking to finally beat WBC heavyweight champion Fury in their third match on Oct. 9. 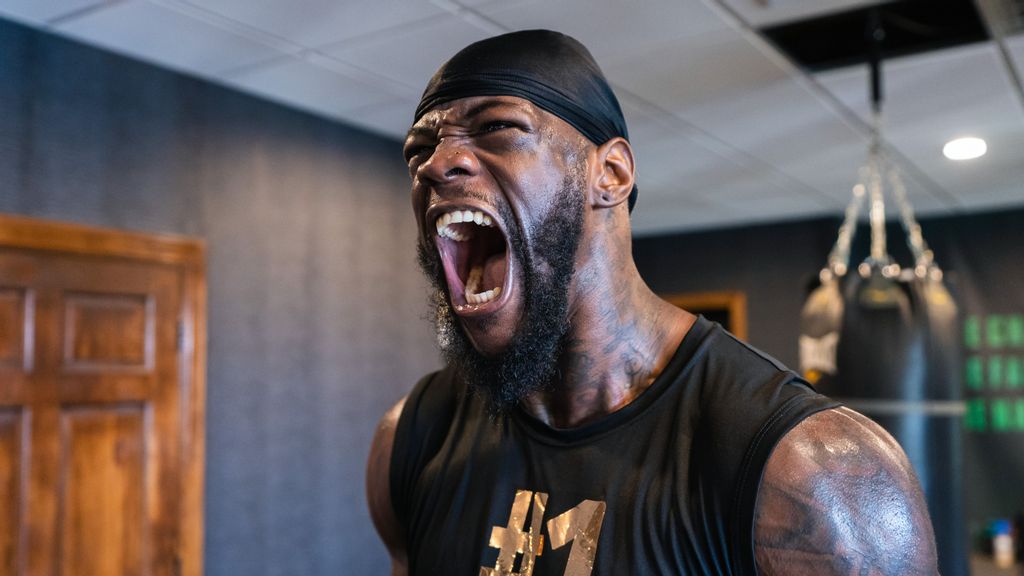 “I've always wanted to be the unified undisputed heavyweight champion of the world. That's my mission, and I won't rest or retire until I accomplish that,” said Deontay Wilder. (Ryan Hafey/Premier Boxing Champions)

Deontay Wilder has a reminder for the heavyweight division.

“I’ve always wanted to be the unified undisputed heavyweight champion of the world,” Wilder said. “That’s my mission, and I won’t rest or retire until I accomplish that.”

Wilder wants to regain his WBC heavyweight crown from England’s Tyson Fury in their third bout on Oct. 9 to set up a unification match with newly crowned southpaw Oleksandr Usyk, who dominated and dethroned IBF/IBO/WBA/WBO champion Anthony Joshua on Saturday at Tottenham Hotspur Stadium in London.

Wilder-Fury was made immediately after Wilder-Joshua negotiations failed in June 2018. “The Bronze Bomber” still believes “AJ” and his promoter, Eddie Hearn, were avoiding him and spoke exclusively to Zenger News on Saturday night within an hour after Usyk-Joshua.

“My goal is to unify the heavyweight division [by] beating Tyson Fury and [going after Oleksandr] Usyk,” said Wilder, a 6-foot-7 power puncher who turns 36 on Oct. 22. “The one thing about Usyk is he has a warrior’s heart, the warrior’s mindset and the willingness to face me. We’ve seen where many other guys [Joshua] didn’t have that heart to do so, because if they did, it would already have been done.”

Usyk won his third heavyweight bout in 23 months, having vanquished Chazz Witherspoon by seventh-round TKO in October 2019 and journeyman Dereck Chisora by unanimous decision in October 2020 to join four-time heavyweight champion Evander Holyfield and David Haye as the only cruiserweights to rise in weight and capture heavyweight crowns.

“I love when someone calls me out, because I love challenges,” Usyk said during the post-fight press conference. “But as long as we have the rematch clause in our contract, Anthony Joshua is our next opponent.”

Joshua (24-2, 22 KOs) lost via a four-knockdown, seventh-round TKO at New York City’s Madison Square Garden to Andy Ruiz in June 2019, ending a reign that began in April 2016 via two-knockdown second-round knockout of southpaw Charles Martin for the IBF title.

“AJ” regained his crowns from Ruiz in December 2019 by unanimous decision, and defended them in December by ninth-round knockout of Kubrat Pulev before facing Usyk.

Wilder’s trainer, Malik Scott, has sparred Usyk on many occasions.

“It’s a chess match when you box him. He’s a brainiac, a scientist and a master boxer,” said Scott, a 6-foot-5 former contender Wilder stopped in 96 seconds in 2014. “But Deontay is preparing for Tyson Fury. In terms of speed, strength and physicality on the inside, my prediction is Fury gets knocked out by Deontay inside of five rounds. But with the kind of condition Deontay’s in, he can win a 12-round decision.”

Wilder was ringside at London’s Wembley Stadium as Joshua made his third defense against a 41-year-old Wladimir Klitschko, rising from the canvas in the sixth round and scoring fifth- and final-round knockdowns. Fury had already dethroned a 39-year-old Klitschko by unanimous decision in November 2015.

“Joshua beat Klitschko when Klitschko had no belts and was coming off a 17-month layoff and the loss to Tyson,” Wilder said.

“Looking at the Ruiz fight and the fact that [other than his fight with Martin] Joshua doesn’t have much experience with southpaws, I don’t think Joshua has any excuses for losing to Usyk.”

“The Bronze Bomber” entered the first fight with Fury following a three-knockdown first-round knockout of Stiverne in November 2017 and a two-knockdown, 10th-round TKO of previously unbeaten southpaw Luis Ortiz in March 2018.

Wilder dropped Fury once each in the ninth and 12th rounds of their first fight only to be floored in the third and fifth of his loss to “The Gypsy King,” who has said Usyk “ain’t on the list of big fights people are interested in.”

“There’s a little more pressure going into the rematch, but I’ve had the weight of the world on my shoulders since the Olympics,” said Wilder, whose 2008 Olympic bronze was America’s first medal of any sort since Andre Ward’s gold in 2004.

“After that, I had the burden of it being up to me to bring the excitement back to America as far as having a champion in the heavyweight division. But when you’re the true king, you understand your purpose, and you know what’s in store for you.”

Beating Fury could bring Wilder to Usyk, who is 10-0 (4 KOs) since winning the cruiserweight title and rising to heavyweight. Usyk went 7-0 (3 KOs) as cruiserweight titleholder, including 5-0 (2 KOs) against reigning or former champions.

On the way to winning the World Boxing Super Series tournament, Usyk stopped former titleholder Marco Huck in the 10th round in September 2017. In 2018, Usyk won decisions over previously unbeaten fighters Mairis Breidis of Latvia and Murat Gassiev of Russia, the latter in the tournament final.

Briedis lost his WBC crown to Usyk by majority decision in January of 2018, falling to 23-1 (18 KOs). Gassiev lost his IBF/WBA crowns in July, slipping to 26-1 (19 KOs) as Usyk became undisputed IBF/WBA/WBC/WBO champion.

In November 2018, Usyk came from behind to win his sixth defense and final cruiserweight fight, dropping and stopping former titleholder Tony Bellew for an eighth-round TKO in Manchester, England. Bellew was coming off back-to-back 11th- and fifth-round TKOs of former heavyweight titleholder Haye in March 2017 and May 2018.

“A victory over Fury puts me in position to accomplish my mission. It’s payback in blood. Oct. 9, I will get my revenge. It’s an eye for an eye,” said Wilder. “The bigger picture for me is that I’ve always wanted to be the heavyweight king, achieving my goal of having one face and one name, and that’s Deontay Wilder, unified, undisputed heavyweight champion of the world.”