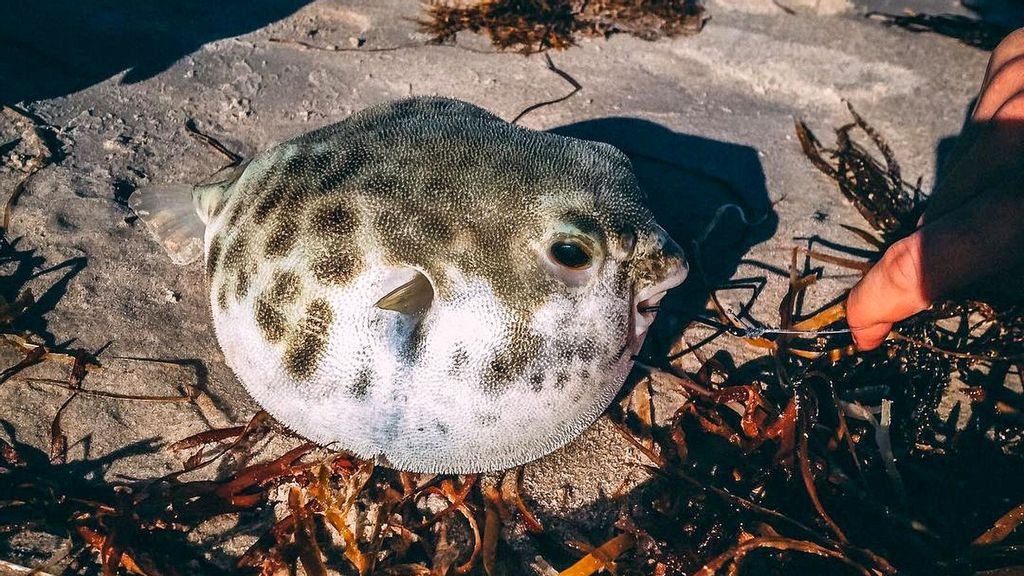 Blowfish caught by Mackenzie Sapier. He photographs his catch and then returns it to the sea in most instances. (@mackenziesapier/Zenger)

A Canadian fisherman is making a splash online with his photos of bizarre-looking marine creatures he caught.

Blowfish, jellyfish, pipefish and prehistoric-looking creatures that would seem at home in an aquatic version of “Jurassic Park” fill his Instagram page.

Mackenzie Sapier from Prince Edward Island has always been drawn to wildlife and the ocean. “But I became passionate about fishing after a long trip to Australia,” he said. There, he was captivated by the variety of species.

“The thing that interests me most is the design and colors and shapes of all the different wildlife in the ocean, which is what drives me to seek out new experiences and travel to see new things,” he said.

Sapier even found a rare blue lobster. The odds of finding one are estimated at 1 in 2 million, according to the New England Aquarium. The blue color is due to a genetic anomaly.

However, the photographer doesn’t keep his catch.

“Throwing the fish I catch back into the ocean is my favorite part. It allows me to satisfy my primal urge to catch the fish without removing the subject from the environment completely.”

“Releasing unintended targets and bycatch is a good way to help ensure there will be such diversity for the next generation,” he said. A bycatch is when fisherman catch and discard fish they do not want or cannot sell. The fish may suffer injuries or die, according to the National Oceanic and Atmospheric Administration.

“One fish I have stumbled across that amazes me is the northern pipefish, which is the only member of the seahorse family in North America and floats around looking just like a stick or piece of seaweed,” said Sapier.  Much like seahorses, the male pipefish keep their young in a pouch.

He is also a fan of the snailfish. It’s a little over four inches long, and it is the main predator in the benthic zone, the lowest ecological zone in a body of water. Snailfish have the widest range of depth of any fish. Sapier said they have been seen as deep as 26,247 feet.

“Fishing is my job for part of the year, when I fish snow crab and lobster,” Mackenzie said. “But I do a lot of recreational fishing, as well as foraging for new species to photograph.”