West African countries are particularly vulnerable because their governments lack the resources to enforce the borders. 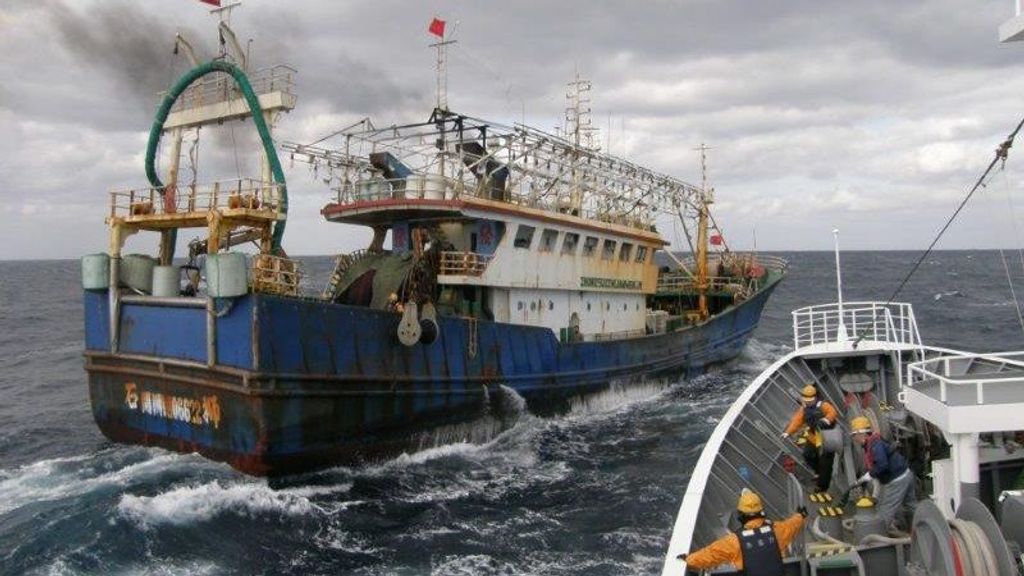 Picturesque Busua Beach in western Ghana looks like a tropical paradise. The waters are warm. Cafés and hotels that cater to the backpackers and surfers who come from all across the globe are filled with tropical fruits and some of the world’s largest avocados.

Yet below the waves, local fishermen describe an ocean that is more like a desert.

“You know, I never used to question it. It isn’t like it was before,” said fisherman Micheal Akwasi. “Some days I wonder what is the point.”

Ghana’s fishermen are feeling the impact of overfishing and illegal, unreported and unregulated (IUU) fishing operations. Many fishermen are seeking new livelihoods on land. Akwasi said some of his colleagues have left the western region to pursue job opportunities in the capital, Accra, about 19 miles away.

West Africa is the epicenter of the world’s IUU fishing problem, in part because many governments in the region lack the resources to enforce their borders. In some cases IUU fishing vessels have been known to boldly cast their nets less than a mile of the shores of West African states.

An investigation by the Environmental Justice Foundation published in 2019 revealed how trawlers are fishing waters regularly fished by Ghanians in traditional canoes. With limited options, local fishermen often have to buy that same fish back from the trawlers in a practice known as “saiko” fishing. The practice is estimated to cost the Ghanaian economy some $50 million a year.

“Although Asian countries dominate the rankings of countries that are highly vulnerable, having a high prevalence of IUU fishing, while responding poorly to the challenges, Middle Eastern, African and Latin American countries also show poor performance,” according to a 2019 report by Poseidon Aquatic Resource Management.

West African governments have sought international assistance to fight IUU fishing. One measure calls for an end to subsidies for international fishing fleets.

Subsidies that make fuel cheaper for long-distance fishing vessels have resulted in unintentionally boosting IUU fishing around the globe. In African waters, China is cited as one of the major countries involved in IUU. European Union countries and the United States also subsidize the fishing industry.

Cheaper vessels are fishing farther than ever from their home ports and are able to reach remote jurisdictions where enforcement is often lax. In many African countries, maritime security has long been an afterthought, leading to increased IUU fishing in their waters.

“In the last 50 years, Africa has lost over $200 billion to illegal fishing by vessels linked to foreign nations. Illegal fishing is so extensive that it amounts to 40-65 percent of the legally reported catch in West Africa alone,” Ifesinachi Okafor-Yarwood, a maritime security researcher in West Africa recently told the UN Security Council. “Yet, there has been zero resolution on this by the UN Security Council.

“In contrast, the economic cost of piracy over the last 20 years does not amount to $20 billion. Neither does the environmental impact directly affect the livelihoods of millions of people,” Okafor-Yarwood said. “Yet, over 30 Security Council resolutions and presidential statements have been issued on piracy in the Gulf of Aden and Gulf of Guinea since 2008. Foreign partners invest millions in tackling piracy while simultaneously investing billions in enabling their fishing vessels to plunder depleting fisheries in Africa.”

Many sea creatures end up as unwanted “bycatch” in a fishermen’s net. “Saiko” fishing was originally intended to help trawlers sell such unwanted fish to local markets. IUU operations are even less likely to follow the necessary regulations to ensure sustainable practices.

“The inclusion of fishing operations in Hezbollah’s global financial support network is alarming but not surprising,” said Peter Hammarstedt, a director of Sea Shepherd Conservation Society.  “Almost 10 years ago, the United Nations Office on Drugs and Crime designated IUU fishing as a transnational organized crime, and Hezbollah-connected businesses have long been linked to other transnational organized crime including drug trafficking, weapons smuggling and arms dealing,”

IUU fishing has been a low priority for international governments’ engagement with Africa. However, in recent years there have been some moves toward cooperation and the development of new programs. KfW, a German state-owned investment and development bank, has financed a digital monitoring system for the coast guard.

Officials across Africa say more must be done to meet the challenge.

«Previous Post
VIDEO: Fisherman Makes Waves With Snaps Of Bizarre Creatures From The Oceans’ Depths»Next Post
The Country Where Nearly No Trees Are Endangered