Venezuela’s Opposition Is Back On The November Ballot 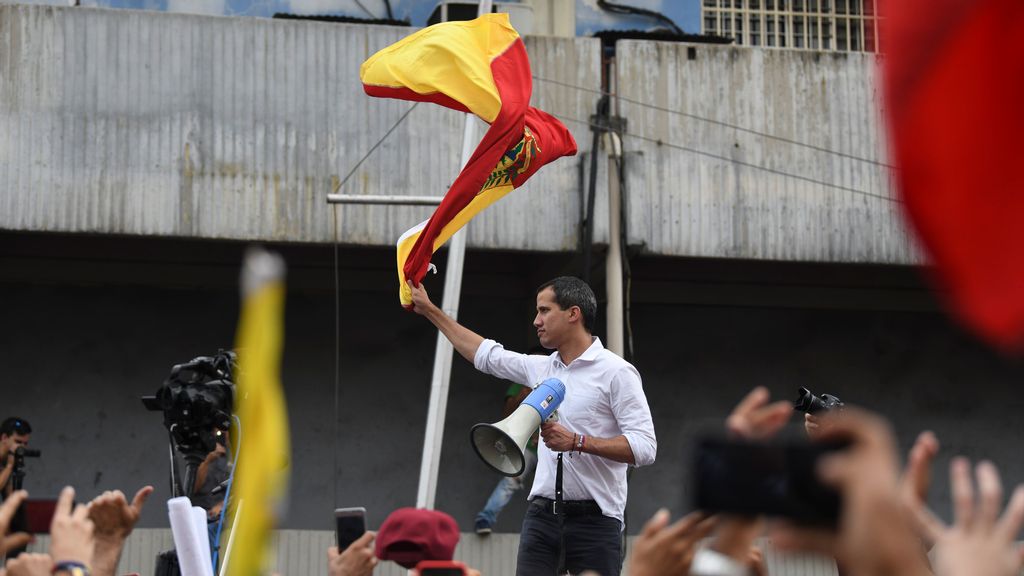 Venezuelan opposition leader Juan Guaidó, recognized by many in the international community as the legitimate interim ruler, waves a flag at a rally in Plaza Bicentenario, in Maracay, on April 26. (Carlos Becerra/Getty Images)

After four years of not participating in an election, the Mesa de la Unidad Democrática (MUD), the main coalition of Venezuela’s opposition, is running in the Nov. 21 elections.

The coalition won the most congressional seats in the 2015 legislative elections. However, it refused to participate in several subsequent elections, including the 2017 and 2019 municipal elections, the 2018 presidential race, and the 2020 legislative race.

The reason for MUD’s absence: It objected to the government’s control of the electoral body and the lack of transparency in the elections.

The opposition recognizes Juan Guaidó and not Nicolás Maduro as Venezuela’s president. Its members claim Maduro’s reelection in 2018 was illegitimate. Since there was no elected president for the period beginning in 2019, they claim, by constitutional succession, the position belongs to Guaidó, who was the president of the National Assembly at that time.

After more than two years in which Maduro managed to maintain de facto power, despite the partial recognition of Guaidó by the international community, the opposition decided to begin a dialogue process with the followers of Chavismo. The Norwegian government organized the negotiations, which are taking place in Mexico.

The political forces representing Guaidó demand the Chavista electoral body authorizes the opposition’s return to the race. They also seek open and transparent elections at all levels and request that humanitarian aid is allowed to enter the Caribbean country.

Conversely, the Maduro regime requests that international economic sanctions on Venezuelan officials and companies be lifted. From its perspective, the deterioration of Venezuela’s crisis is the result of the international blockade the country has faced in recent years.

The negotiations seemed to get off to a good start, when both parties agreed on a common goal: The ratification and defense of sovereignty over Guayana Essequibo, a territory Venezuela has claimed since its Independence, first from the United Kingdom, then from Guyana.

But the dynamic changed in mid-September, when Chavismo followers asked to incorporate a new member to their delegation: Alex Saab, a Colombian businessman linked to the Venezuelan government, who has been accused of corruption and money laundering. Saab was detained in Cape Verde in June 2020, and on Sept. 8, 2021, the country’s Constitutional Court authorized his extradition to the United States.

Two months before the Nov. 21 elections, Nicolás Maduro calls on Venezuelans to participate. “To vote is to ratify peace, the electoral system, the constitution and sovereignty,” he posted on Twitter.

However, some see the opposition’s participation in a somewhat weaker light.

“The opposition believes it has no alternative but running in the November regional elections,” Venezuelan political scientist Enderson Sequera told Zenger. “It fears disappearing as a political force if it refuses to participate. … Today, when [the opposition] can mobilize the country because we are in the middle of a pandemic and the international situation has changed — the pressure on Chavismo has decreased — it returns to the remaining alternative: the electoral path,” he said.

In fact, the MUD opposition faces key challenges: lack of new leadership, the population’s lack of trust in the electoral body, and the possible decrease in the electoral roll after more than 5 million people emigrated from Venezuela.

“The opposition hopes to regain political momentum organizing Venezuelans to mobilize against Maduro’s dictatorship. Without question, that choice has a great number of challenges ahead, to which it has not given any effective response so far,” said Sequera.

As positions of less hierarchy — governors and mayors — are at stake in the Nov. 21 election, certain segments believe Chavismo followers could allow the opposition to win historically disputed positions.

The opposition’s best result in regional elections was in 2008, when it managed to sit five governors and 54 mayors, while Chavismo sat 17 governors and 272 mayors.

Sequera does not envision that outcome in November.

“Chavismo could lose power if it improves electoral integrity before the presidential election. They [its followers] are not going to give in right now, or at least not without pressure from the international community,” he said.

The dialogue in Mexico and the opposition’s participation in the upcoming elections may change the international community’s perception of Venezuela’s authorities.

Iván Rojas Álvarez, a Venezuelan internationalist, believes if the dialogue were successful, the government would normalize its relationship with other countries. However, he sees it as a difficult move to pull off.

“It would depend on the negotiation’s particularities and the points upon which people end up agreeing. It’s very difficult for the current process to lead to a robust agreement that could achieve it, especially when Chavismo has room for maneuver and the opposition lacks clear ways to increase pressure on it,” he told Zenger.

Rojas Álvarez thinks a more likely scenario would be the parties arrive at “a more modest agreement, which would lead the international community to support a future negotiation. Perhaps, it would also motivate some states to rethink their current relations with the country.”

Maduro’s recent participation in CELAC’s (Community of Latin American and Caribbean States) summit — which took place in Mexico — and his disagreements with Uruguay and Paraguay’s presidents, may change the international community’s perception of Venezuela.

“It is not common for a president to criticize another in such a frontal way in this type of event. From that perspective, it is difficult to see Maduro coming out stronger. Although some [analysts] interested in the optics of the situation could say that having Maduro represent Venezuela in an event with other heads of state, despite being a de facto president, strengthens him,” said Rojas Álvarez.

“In general, the press has dealt quite lightly with a very complex and sensitive issue, such as who is Venezuela’s legitimate president and why. That depends on the perspective you take. Perhaps, Chavismo can turn the event into a media victory,” he said.

“Maduro seems desperate for legitimacy in CELAC and ends up hurt: He does not have and will not have recognition,” Guaidó posted on Twitter, along with a video where Mario Abdo Benítez, Paraguay’s president, says his presence at the summit does not represent any type of recognition for Maduro’s government.

A high turnout is not expected for the Nov. 21 elections.

The opposition “prevented us from voting for about five years, saying that Maduro and the followers of Chavismo were illegitimate, and now they want us to vote because its candidates are running against them. I’m not going to vote, especially amid a pandemic,” Carmen Gil, a Venezuelan citizen, told Zenger.

“The Venezuelan opposition will be overwhelmingly defeated in the November elections,” Sequera said, based on the polls.

“The turnout is expected to be 40 percent, that is, about 8 million Venezuelans may vote and 4 million would vote for the PSUV [Maduro’s United Socialist Party of Venezuela]. Why? Because despite being very unpopular, it continues to have an extraordinary capacity for electoral mobilization among its voter base,” he said.

The opposition may receive much lower support.

“The data tells us that in the best scenario, it will get 2.5 million votes; in the worst, 1 million votes,” said Sequera. He believes the most likely outcome is that Chavismo will win all the states and more than 300 municipalities in Venezuela.